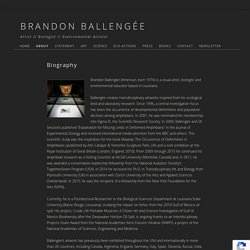 Ballengée creates transdisciplinary artworks inspired from his ecological field and laboratory research. Since 1996, a central investigation focus has been the occurrence of developmental deformities and population declines among amphibians. In 2001, he was nominated for membership into Sigma XI, the Scientific Research Society. In 2009, Ballengée and SK Sessions published “Explanation for Missing Limbs in Deformed Amphibians” in the Journal of Experimental Zoology and received international media attention from the BBC and others. This scientific study was the inspiration for the book Malamp: The Occurrence of Deformities in Amphibians (published by Arts Catalyst & Yorkshire Sculpture Park, UK) and a solo exhibition at the Royal Institution of Great Britain (London, England: 2010). 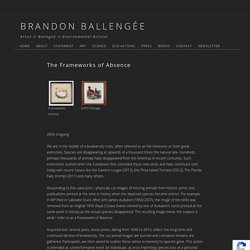 Hundreds, perhaps thousands of animals have disappeared from the Americas in recent centuries. Such extinctions started when the Europeans first colonized these new lands and have continued until today with recent losses like the Eastern cougar (2013), the Pinta Island Tortoise (2012), The Florida Fairy shrimp (2011) and many others. Responding to this cataclysm, I physically cut images of missing animals from historic prints and publications printed at the time in history when the depicted species became extinct. For example, in RIP Pied or Labrador Duck: After John James Audubon (1856/2007), the image of the birds was removed from an original 1856 Royal Octavo (hand-colored by one of Audubon’s sons) printed at the same point in history as the actual species disappeared. Artist-Biologist Brandon Ballengée Examines Animal Extinction and Calls for Change. Artist Cuts Extinct Animals Out of Their Illustrations.

American artist Brandon Ballengée doubles as a biologist, and draws inspiration from his ecological field and laboratory research. 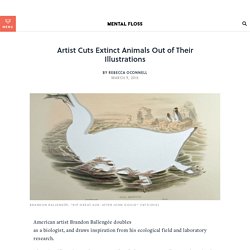 The scientific artist's "The Frameworks of Absence" pays tribute to the animals that have been erased off the earth by erasing them from acquired natural history lithographs. Ballengée cut the animals out of their illustrations and framed the empty outlines. The cut-out animals were then burned and placed in vials with labels that read "RIP. " The altered lithographs are currently on display at the Ronald Feldman Fine Arts booth in the Armory Show in New York City. They serve as a stark memorial for the animals that have ceased to exist. Ballengée explains on his website: We are in the middle of a biodiversity crisis, often referred to as the Holocene or Sixth great extinction. The works currently on display are set up like a Victorian funeral. IUCN Red List of Threatened Species. List of Extinct Species. TONY KARUMBAGetty Images Several species are being driven to extinction thanks, in large part, to human interference. 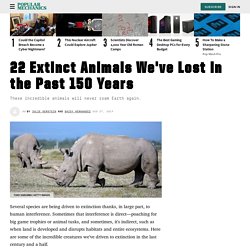 Sometimes that interference is direct—poaching for big game trophies or animal tusks, and sometimes, it's indirect, such as when land is developed and disrupts habitats and entire ecosystems. Here are some of the incredible creatures we've driven to extinction in the last century and a half. Advertisement - Continue Reading Below Bramble Cay Melomys These little guys were officially declared extinct by the International Union for Conservation of Nature (IUCN) in 2015. Cause of Extinction: Man-made climate change which led to loss of habitat and food. Yangtze River Dolphin Also known as 'baiji,' the Yangtze River dolphin was last seen in 2002. Cause of Extinction: overfishing, pollution, loss of habitat, poaching, and boat traffic. Extinct animals: facts for kids. Earth is home to lots of wonderful wildlife, but sadly, some species that once called our planet home today no longer exist. 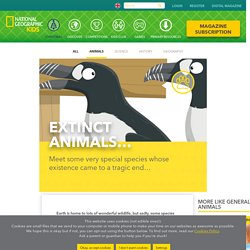 These are known as extinct animals. And we’re not just talking about roar-some prehistoric dinosaurs! There are ‘recently extinct’ animals, too – animals that have died out since the 1500s. Join us as we travel back in time to discover the sad stories of eight of these incredible creatures… Eight extinct animals DodoMauritius 1680s* All that remains today of the dodo are a few bones and partial skeletons – so it’s no wonder we have the expression ‘dead as a dodo’! (* The year of extinction) Great Auk Rocky islands off the North Atlantic coast (1844) The black-and-white great auk was once found around the North Atlantic, waddling around on craggy coasts – including in the UK – or swimming in the waves using its short wings.