US County Electoral Map - Land Area vs Population - Engaging Data. County-level Election Results from 2020 and 2016 The map has been updated to include preliminary 2020 results This interactive map shows the election results by county and you can display the size of counties based on their land area or population size. 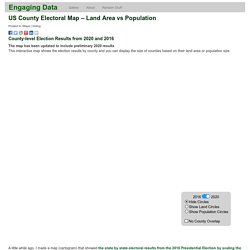 A little while ago, I made a map (cartogram) that showed the state by state electoral results from the 2016 Presidential Election by scaling the size of the states based on their electoral votes. The idea for that map was that by portraying a state as Red or Blue, your eye naturally attempts to determine which color has a greater share of the total. On a normal election map of the 2016 Election, Red states dominate, especially because a number of larger, less populated states happen to vote Republican. That cartogram changed the size of the states so that large states with low population, and thus low electoral votes tended to shrink in size, while smaller states with moderate to larger populations tended to grow in size. *****Urban Expansion 3D Visualization / Animation (4000 years of population growth 2200 BC - 1980 AD)

The closest thing we have to time travel. Footage from 1901 of people in the north of England, sharpened using neural networks. The faces of the kids, for all their grinning, look haggard and aged – a likely symptom of the austere times they lived in. Lower life expectancy among males. Year 11 to 12 human geography bridging pack 2 (Population) now completed. Free download from Pack 3: Globalisation in progress... #geographyteacher… Human Population Through Time. 7.7 Billion and Counting. Was Malthus right all along?! Ben Ranson sur Twitter : "That's how I understand it, both believe that there are limits to growth. It makes growth scepticism the container, rather than Malthusianism being the container. We can think of them being part of a tradition of thinking about l.

Will saving poor children lead to overpopulation? Short answer - No. 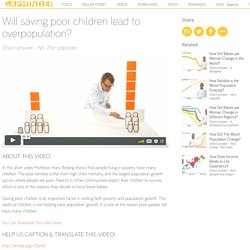 The opposite. In this short video Professor Hans Rosling shows that people living in poverty have many children. The poor families suffer from high child mortality, and the largest population growth occurs where people are poor. Parents in richer communities expect their children to survive, which is one of the reasons they decide to have fewer babies. Saving poor children is an important factor in ending both poverty and population growth. You can download this video here! United Nations World Population Prospects 2012 Creative Commons Attribution 4.0 International Please copy and redistribute this film in any medium or format You must include the following attribution to Gapminder: “Free material from WWW.GAPMINDER.ORG” 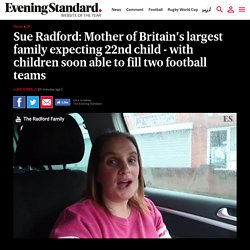 Sue Radford, 44, and her husband Noel, 48, used a vlog posted on YouTube to reveal they are expecting another baby in April. The couple, who have a baking business in Morecambe, Lancashire, already have 11 girls and 10 boys. *****BC: Demography, demography, demography... Everyone needs to improve their understanding about what's really happening to the world's #population and why. Excellent article by @dannydorling, one of the #GreatExplainers #GeographyTeacher https. *****Professor Danny Dorling says we need more babies, not fewer, Harry.

Many thousands of words have been written on the subject of Prince Harry’s announcement in Vogue last week that, when it comes to children, he intends to have ‘Two, maximum!’ 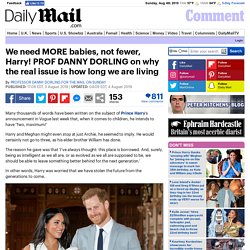 Harry and Meghan might even stop at just Archie, he seemed to imply. He would certainly not go to three, as his elder brother William has done. The reason he gave was that ‘I’ve always thought: this place is borrowed. And, surely, being as intelligent as we all are, or as evolved as we all are supposed to be, we should be able to leave something better behind for the next generation.’ In other words, Harry was worried that we have stolen the future from the generations to come. Prince Harry, Duke of Sussex and Meghan, Duchess of Sussex, pose with their newborn son, Archie Harrison Mountbatten-Windsor, two days after his birth.

Prince Harry carefully cradles new son Archie. *****The new Global Human Settlement dataset is one of the best visualizations of population there around, easily conveying population density and total population at once. And the best part is it's open and free. Explore th. *****Amazing graphic of the world #population by size, country and continent ... I can use this as a great starter for world population lessons #geography #geographyteacher. How has life expectancy changed over time, by region? Find out more about life expectancy here #geographyteacher… Comparing population changes in India □□ and China □□. Notice the fall in fertility rates and growing elderly population over time.… *****Demographic profile of UK incl Brexit vote (video animation) *****Gapminder Slideshows. Create your own Gapminder presentation Download & combine the slides below to fit your presentation style. 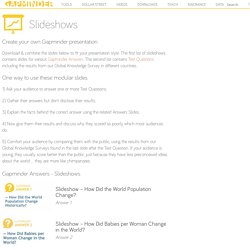 The first list of slideshows contains slides for various Gapminder Answers. The second list contains Test Questions including the results from our Global Knowledge Survey in different countries. One way to use these modular slides 1) Ask your audience to answer one or more Test Questions; 2) Gather their answers but don’t disclose their results; 3) Explain the facts behind the correct answer using the related Answers Slides; 4) Now give them their results and discuss why they scored so poorly, which most audiences do; 5) Comfort your audience by comparing them with the public, using the results from our Global Knowledge Surveys found in the last slide after the Test Question. *****Demographics: What We Can Do. How does the number of people without health insurance differ for men and women? Use these maps to compare uninsured rates across the #US #healthinsurance… Simon Kuestenmacher sur Twitter : "How reliable our world population forecasts? Very reliable actually! But don't take my word for it. Rather have the late @HansRosling tell you in 90 seconds why our global population forecasts are pretty darn good. Sourc.

New Teaching Notes from Our World in Data. Max Roser sur Twitter : "Many of you requested teaching material on global development from us. @eortizospina has therefore produced 5 slide decks for teaching and they are now available online – hopefully at a good time with the start of the academic yea. The Overpopulation Myth. #Map shows the world’s too 10 most populous countries as of July 2018. Important #trivia knowledge! Source. We're looking forward to @AndyTatem's lecture on #GeographicInformation this evening! You can hear more from him on the podcast he recorded…