Breakthroughs in schizophrenia research and treatment happening in San Antonio. What is schizophrenia? - Anees Bahji. Biological basis of schizophrenia. WHAT HAPPENS IN THE BRAIN OF SCHIZOPHRENIA PATIENTS?: AN INVESTIGATION FROM THE VIEWPOINT OF NEUROPATHOLOGY. Scientists solve secret of nerve cells marking a form of schizophrenia. The neurons generated from every 22q11DS carrier in the study demonstrated a consistently less-than-normal voltage difference between the inner-facing and outer-facing sides of the cell membranes when the cells weren’t firing. 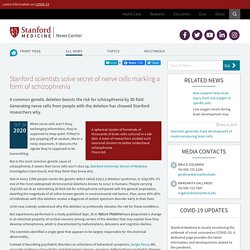 A quiescent neuron’s cross-membrane voltage difference is called its resting membrane potential; it keeps the neuron poised to fire while preventing it from firing at random. Cortical neurons derived from people with 22q11DS were more excitable, the study found. This is likely because of their abnormal resting membrane potential, Pasca said. The 22q11DS-derived neurons spontaneously fired four times as frequently as neurons derived from people in the control group.

This altered resting membrane potential also led to abnormalities in calcium signaling in the 22q11DS neurons. The researchers also studied a gene called DGCR8, which has been suspected of being tied to schizophrenia. “DGCR8 is probably the main player in the cellular defects we observed,” Pasca said. Cell types underlying schizophrenia identified. The cell types underlying schizophrenia have been identified in a genetic study that looked for commonalities among the different genes already linked to the condition, find researchers at UCL, Karolinska Institutet (Sweden) and University of North Carolina (USA). 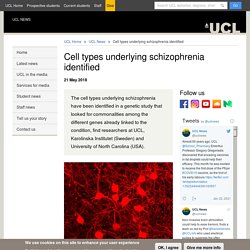 The study, published today in Nature Genetics, offers a roadmap for the development of new therapies to target the condition. "Understanding which cell types are affected in a disease is of critical importance for developing new medicines to improve their treatment. If we do not know what causes a disorder we cannot study how to treat it," said co-lead author Dr Nathan Skene (UCL Institute of Neurology and Karolinska Institutet). Neuropathology of schizophrenia. Skip to Main Content Advertisement Search Close Advanced Search Search Menu Skip Nav Destination Article Navigation Volume 122 Issue 4 April 1999 Article Contents The neuropathology of schizophrenia: A critical review of the data and their interpretation Paul J. 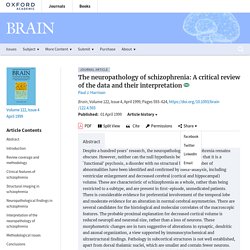 Paul J. University Department of Psychiatry, Warneford Hospital, Oxford, UK Dr P. Search for other works by this author on: Oxford Academic. The brain cells that drive schizophrenia. May 24, 2018 A new study led by researchers at the Karolinska Institutet in Solna, Sweden, in collaboration with scientists from the Allen Institute for Brain Science and others, has pinpointed specific cell types in the brain that may contribute to schizophrenia. 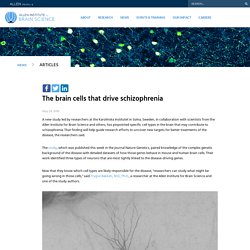 That finding will help guide research efforts to uncover new targets for better treatments of the disease, the researchers said. The study, which was published this week in the journal Nature Genetics, paired knowledge of the complex genetic background of the disease with detailed datasets of how those genes behave in mouse and human brain cells.

Their work identified three types of neurons that are most tightly linked to the disease-driving genes. Now that they know which cell types are likely responsible for the disease, "researchers can study what might be going wrong in those cells," said Trygve Bakken, M.D., Ph.D., a researcher at the Allen Institute for Brain Science and one of the study authors. Recent advances in postmortem pathology and neurochemistry i... : Current Opinion in Psychiatry. Schizophrenia: Edited by W. 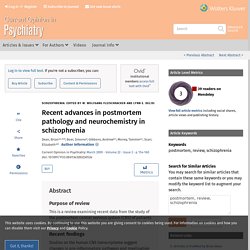 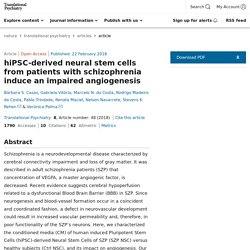 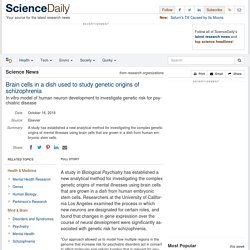 Researchers at the University of California Los Angeles examined the process in which new neurons are designated for certain roles, and found that changes in gene expression over the course of neural development were significantly associated with genetic risk for schizophrenia. "Our approach allowed us to model how multiple regions in the genome that increase risk for psychiatric disorders act in concert to affect molecular and cellular function that is relevant for neurodevelopment. 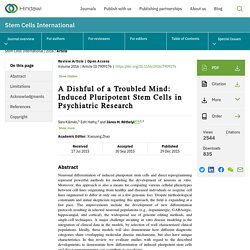 Moreover, this approach is also a means for comparing various cellular phenotypes between cell lines originating from healthy and diseased individuals or isogenic cell lines engineered to differ at only one or a few genomic loci. Despite methodological constraints and initial skepticism regarding this approach, the field is expanding at a fast pace.

The improvements include the development of new differentiation protocols resulting in selected neuronal populations (e.g., dopaminergic, GABAergic, hippocampal, and cortical), the widespread use of genome editing methods, and single-cell techniques. Medicine’s next big thing? Stem cells and schizophrenia. It can be a scary mental disorder. 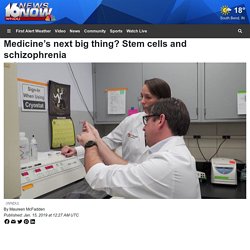 Schizophrenia is not a common condition, but for those who have it, life can be nightmarish. Now, a Texas scientist is researching stem cells and how they might help treat this devastating disorder. Schizophrenia is a difficult mental disorder that causes a person to lose touch with reality. Because the symptoms can be so severe, it’s treated with strong drugs, but they have side effects. So, a Texas scientist has unveiled a different approach that may be a game-changer. Cause of Schizophrenia May Lie in Stem Cells. For many years scientists have tried to investigate the true nature of schizophrenia and its causes, now it seems that scientists may have found a significant clue, and it lies in the cells. 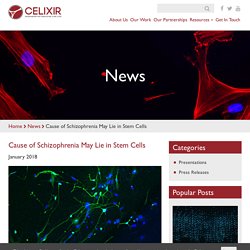 A recent study, condemned by some as ‘unethical’, for its use of ‘chimeras’ (animals created by transplanting cells from one species to another), has shown that mice injected with cells from schizophrenic patients displayed all the same signs of schizophrenia. The study which took place at the university of Rochester Medical Center injected human cells into newborn mice. Lab mice that were injected with the cells of patients suffering from schizophrenia displayed symptoms such as being afraid of strangers, anxiety and memory loss.

They used the skin cells from three people with schizophrenia, and three people without the condition. The 2019 Schizophrenia International Research Society Conference, 10–14 April, Orlando, Florida: A summary of topics and trends. 1. Introduction The Schizophrenia International Research Society (SIRS) recently held its first North American congress, which took place in Orlando, Florida from 10-14 April 2019. The overall theme of this year's congress was United in Progress – with the aim of cultivating a collaborative effort towards advancing the field of schizophrenia research. Judge Steven Leifman opened the congress with his keynote talk, in which he called for an end to the criminalization of mental illness. He highlighted the plight of individuals living with a serious mental illness as well as their families and caregivers who are often forced to turn to the criminal justice system for help, since the mental health system have failed them.

Student travel awardees provided reports of the oral sessions and concurrent symposia that took place during the congress. 2. Improving Therapeutic Interventions of Schizophrenia with Advances in Stem Cell Technology.