(2) The March of History: Mises vs. Marx - The Definitive Capitalism vs. Socialism Rap Battle. This 10-Year Time Lapse of the Solar Cycle Is Breathtaking. This weekend, you should probably go stare at the sun. 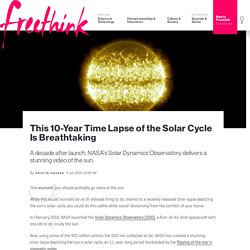 While this would normally be an ill-advised thing to do, thanks to a recently released time-lapse depicting the sun's solar cycle, you could do this safely while social-distancing from the comfort of your home. In February 2010, NASA launched the Solar Dynamics Observatory (SDO), a first-of-its-kind spacecraft with one job to do: study the sun. Now, using some of the 425 million photos the SDO has collected so far, NASA has created a stunning time-lapse depicting the sun's solar cycle, an 11-year-long period bookended by the flipping of the star's magnetic poles. The Solar Cycle The hour-long video begins at a point in the sun's solar cycle called the "solar minimum. " The number and intensity of these bursts increases in the video until they peak near its midpoint — that's when the cycle reaches the "solar maximum" — and then begin subsiding once again. 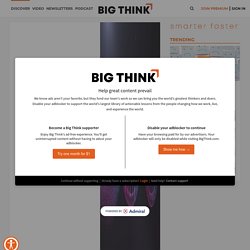 The study identifies a specific set of feelings that music can evoke, which you can experience in this incredible interactive map. Further research can use these findings to figure out how music stirs emotion in us. "Music is a universal language, but we don't always pay enough attention to what it's saying and how it's being understood," says neuroscience doctoral student Alan Cowen of UC Berkeley and the lead author of a new study aimed at identifying the feelings music conveys. He and senior author psychologist Dacher Keltner, also of UC Berkeley, surveyed thousands of American and Chinese listeners to derive a list of 13 of music's emotional languages, along with the types of music that evoke them. The purpose of the study In online music streaming services, a variety of methods go into the creation of playlists designed to inspire specific moods and support various activities.

Your Textbooks Are Wrong, This Is What Cells Actually Look Like. We asked teenagers what adults are missing about technology. This was the best response. “What do adults not know about my generation and technology?” 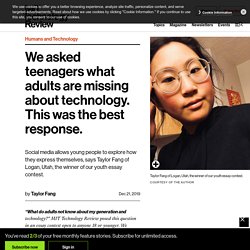 MIT Technology Review posed this question in an essay contest open to anyone 18 or younger. We received 376 submissions from young people in 28 different countries. Many were angry; some were despondent. We think the winning essay, by Taylor Fang, presents a nuanced and moving view of how technology can be harnessed in the service of a richly realized life.

We hope you agree. Screen. The screen also conceals those who use it. Generation Z is entitled, depressed, aimless, addicted, and apathetic. But teens don’t use social media just for the social connections and networks. It’s true that social media’s constant stream of idealized images takes its toll: on our mental health, our self-image, and our social lives. But if adults are worried about social media, they should start by including teenagers in conversations about technology. I’ve seen this from my own experience. Why Brown Is A Way Weirder Color Than You Realize.