Exhibition Work — GEORGE AGIUS. Nereis australis, or Algae of the southern ocean : being figures and descriptions of marine plants, collected on the shores of the Cape of Good Hope, the extra-tropical Australian colonies, Tasmania, New Zealand, and the Antarctic regions; deposited in th. V.2 (1912) - Icones of Japanese algae. Nihon kaiso zusetsu = The art and science of seeing sea-weeds. Membranoptera alata & Scytosiphon Dumontia incrassata Ceramium rubrum Enteromorpha intestinalis, E. compressa Plumaria elegans These green and red algae were collected on a university field trip at the University of Liverpool’s former Marine Laboratory at Port Erin on the Isle of Man. 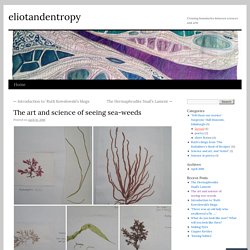 Collecting seaweed and displaying it in albums was one of the ‘sea-shore pleasures’ that entertained the Victorian middle classes. ‘Seaweed and sentiment’, 1865 (Collecting sea-anemones – actinia – and keeping them in marine aquaria was another craze, inspired by Philip Henry Gosse’s Actinologia Britannica (1860): so much so that he was to bewail, ‘They have swept the shore clean as with a besom!’) Amelia Griffiths (1768-1858), the widow of a clergyman, had become singularly knowledgeable about seaweeds. Bioluminescent Algae Light Up London’s Merge Festival. Clothes colored by algae. Raza Weber at TEDxHamburg (Photo: Sebastian Gabsch) Rasa Weber is inspired by algae. 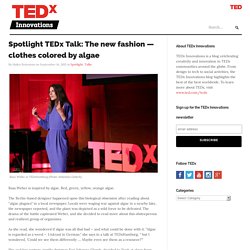 Red, green, yellow, orange algae. The Berlin-based designer happened upon this biological obsession after reading about “algae plagues” in a local newspaper. Locals were waging war against algae in a nearby lake, the newspaper reported, and the plant was depicted as a wild force to be defeated. The drama of the battle captivated Weber, and she decided to read more about this obstreperous and resilient group of organisms. As she read, she wondered if algae was all that bad — and what could be done with it. She and her partner, textile designer Essi Johanna Glomb, decided to “look at algae from the perspective of a designer” to see what they could create from this group of weeds. After their visit, the pair began to use dried microalgae to create a “biological color palette,” Weber says.

Weber and Glomb’s analogue algae textile printing machine (Photo: Blond and Bieber) Alexander McQueen Spring 2012 — Review. Observing it all somewhere a little further off, David Burton, the designer’s photographer-husband, remarked, “When you think about everything that’s happened to her in the past eighteen months, you just couldn’t make it up, could you?” 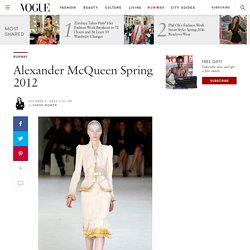 No, you could not. Three measures of exactly how speedily time zips past in fashion are these thoughts: a) that Alexander McQueen died only in February 2010, b) Catherine Middleton was married to Prince William this year on April 29 in a Sarah Burton for McQueen dress, and c) the Alexander McQueen exhibit in New York broke records at the Met before closing in August. Those events have so swiftly passed into history that it’s incredible to realize: This is just the third collection Sarah Burton has designed on her own. With this one, she, like Riccardo Tisci at Givenchy and Karl Lagerfeld at Chanel, made her theme aquatic. But Burton’s way of looking at clothes is lighter than that of her former boss in both senses. World Oceans Day. Anselm Kiefer and the art of algae … My quest for algae in fine art took an unexpected turn at the weekend when I visited the Anselm Kiefer show at Tullie House Museum and Art Gallery in Carlisle. 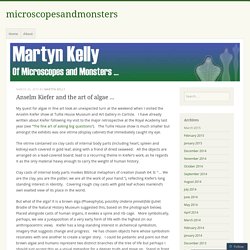 I have already written about Kiefer following my visit to the major retrospective at the Royal Academy last year (see “The fine art of asking big questions”). The Tullie House show is much smaller but amongst the exhibits was one vitrine (display cabinet) that immediately caught my eye. The vitrine contained six clay casts of internal body parts (including heart, spleen and kidney) each covered in gold leaf, along with a frond of dried seaweed. All the objects are arranged on a lead-covered board; lead is a recurring theme in Kiefer’s work, as he regards it as the only material heavy enough to carry the weight of human history.

But what of the alga? Anselm Kiefer’s Untitled (1988): a vitrine containing six gold-plated clay objects along with a frond of dried seaweed, on display at Tullie House, Carlisle, March 2015. Reference. Signed by the Artist, Tagged by the Sea - Symbiartic - Scientific American Blog Network. Yesterday we kicked off the September SciArt Blitz with Museo Atlántico, an underwater museum made of cast concrete figures and objects that will sit off the coast of the Canary Islands once completed, forming an artificial reef. 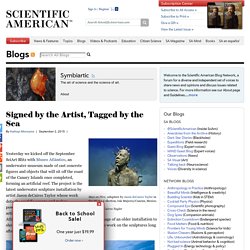 The project is the latest underwater sculpture installation by artist Jason deCaires Taylor whose work dots the world’s oceans and makes powerful statements about politics, human activity, and climate change. Since Museo Atlántico is not completed yet, I promised to post an image of an older installation to show how the corals and algae take hold and continue to work on the sculptures long after Taylor’s hands have quit.

A Sea of Glass, Haeckel, Art Nouveau. If you have the opportunity, you must go see this exhibition! 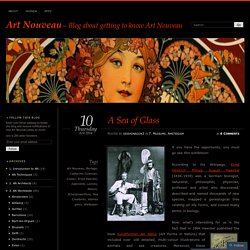 According to his Wikipage, Ernst Heinrich Philipp August Haeckel (1834–1919) was a German biologist, naturalist, philosopher, physician, professor and artist who discovered, described and named thousands of new species, mapped a genealogical tree relating all life forms, and coined many terms in biology. Now, what’s interesting for us is the fact that in 1904 Haeckel published the book Kunstformen der Natur (Art Forms in Nature) that included over 100 detailed, multi-colour illustrations of animals and sea creatures. Moreover, these illustrations inspired many Art Nouveau artists like Émile Gallé, Hendrik Petrus Berlage and René Lalique, all of whom owned a copy of the book. Kunstformen der Natur bridged the gap between science and art. The exhibition A Sea of Glass at the National Glass Museum includes a lot of large Haeckel posters as well as artworks inspired by these posters.