The Story of Christian Gottfried Ehrenberg. The Diatomist. The Designer Who Peered Into Microscopes and Saw High Art. Carl Strüwe took only two kinds of photographs. 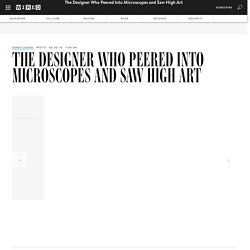 The first was typical enough: Italian sculpture and architecture he saw on vacation. The second was far less typical: close-ups of diatoms, butterfly wings, snail tongue, whalebone—all taken through a microscope. By simply zooming in, Strüwe took the familiar and made it alien. The German photographer wasn’t the first to place the lens of a camera into the eyepiece of a microscope, but in the 1920s, he was among the first to do so as art rather than science. The view from a typical microscope is circular. Carl Strüwe: Microcosmos showcases more than 50 black and white photos from the photographer’s archive. Croft Kettle through the magnifying glass: Kelly. Tidings of Great Joy … – microscopesandmonsters. Tripping over diatom sculptures. This post takes me about 12 kilometres further north from the Durham coastal location that I wrote about in County Durham’s Tropical Seashore. 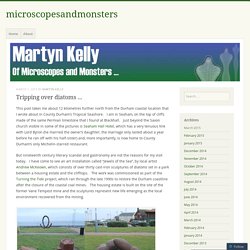 I am in Seaham, on the top of cliffs made of the same Permian limestone that I found at Blackhall. Just beyond the Saxon church visible in some of the pictures is Seaham Hall Hotel, which has a very tenuous link with Lord Byron (he married the owner’s daughter; the marriage only lasted about a year before he ran off with his half-sister) and, more importantly, is now home to County Durham’s only Michelin-starred restaurant. But nineteenth century literary scandal and gastronomy are not the reasons for my visit today. Making the invisible visible. The Museum of Water. Preserving a Diatom Collection. Algae World: Collections of diatoms in the Royal Botanic Garden Edinburgh: G.A. Walker Arnott slides and unmounted material. Walker Arnott collections The Royal Botanic Garden Edinburgh holds a large collection of slides and unmounted material from G.A. 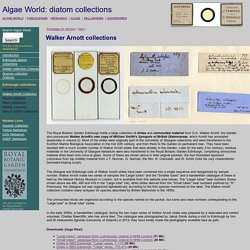 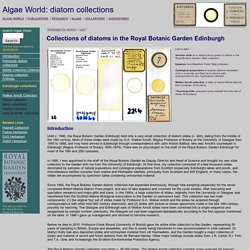 Main collection. Epipelon from Blackford Pond, Main collection. Cytological preparation of epipelic diatoms harvested onto a cover-slip and fixed and stained (with acetocarmine) in situ. Cytological collection Walker Arnott collection: a slide of marine littoral diatoms from Cumbrae, W Scotland. ? Introduction. Algae World: The Geitler Collection of diatoms in the University of Vienna. 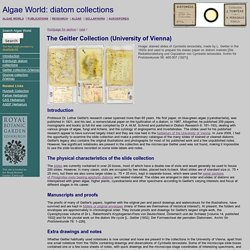 Lothar Geitler's research career spanned more than 65 years. His first paper, on blue-green algae (cyanobacteria), was published in 1921, and his last, a nomenclatural paper on the typification of a diatom, in 1987. Altogether, he published 359 papers, monographs and books (a full list was compiled by Dr A. -M.M. Algae World: The Grunow Collection of diatoms in Vienna (Naturhistorisches Museum Wien)

Mic-UK: Image gallery. Image gallery. The Really Rare Diatom Show. Having set out the limitations of my exercise to define nationally-scarce or rare diatoms, I have drastically reduced my list of candidates from 377 species down to eight. 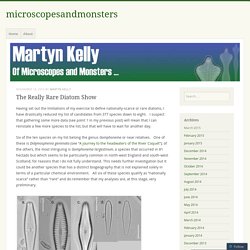 I suspect that gathering some more data (see point 1 in my previous post) will mean that I can reinstate a few more species to the list, but that will have to wait for another day. Six of the ten species on my list belong the genus Gomphonema or near relatives. One of these is Didymosphenia geminata (see “A journey to the headwaters of the River Coquet”); of the others, the most intriguing is Gomphonema tergestinum, a species that occurred in 81 hectads but which seems to be particularly common in north-west England and south-west Scotland, for reasons that I do not fully understand. This needs further investigation but it could be another species that has a distinct biogeography that is not explained solely in terms of a particular chemical environment. Nationally scarce Gomphonema species? Tetracyclus emarginatus. What are Diatoms? General Information The division Bacilliariophyta is distinguished by the presence of an inorganic cell wall composed of silica (hydrated Si02). 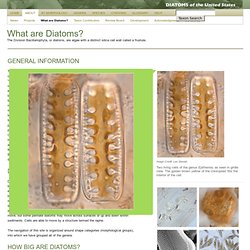 The wall, or frustule, consists of two parts called “valves”. Diatoms have evolved to have elaborate silica cell walls that reflect the types of habitat to which the particular species is adapted. Diatoms are abundant in nearly every habitat where water is found – oceans, lakes, streams, mosses, soils, even the bark of trees. Diatoms grow as single cells, or form simple filaments or colonies. Species. Diatom. General biology[edit] A diatom. 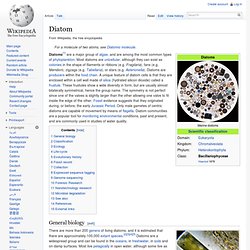 Numbered graduations are 10 micrometres apart There are more than 200 genera of living diatoms, and it is estimated that there are approximately 100,000 extant species.[2][3][4][5] Diatoms are a widespread group and can be found in the oceans, in freshwater, in soils and on damp surfaces. Most live pelagically in open water, although some live as surface films at the water-sediment interface (benthic), or even under damp atmospheric conditions. They are especially important in oceans, where they are estimated to contribute up to 45% of the total oceanic primary production.[6] Spatial distribution of marine phytoplankton species is restricted both horizontally and vertically.[7][8] Usually microscopic, though some species of diatoms can reach up to 2 millimetres in length. 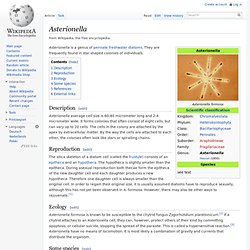 They are frequently found in star shaped colonies of individuals. Description[edit] Asterionella average cell size is 60-80 micrometer long and 2-4 micrometer wide. It forms colonies that often consist of eight cells, but can vary up to 20 cells. Fragilaria capucina. Fragilaria. History of Diatoms at the ANS. Research at The Academy of Natural Sciences of Drexel University. The core research collection was founded upon the collections of nineteenth- and early twentieth century [amateur] diatomists, and includes material from as early as 1771. 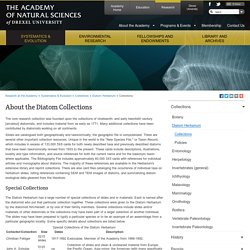 Many additional collections have been contributed by diatomists working on all continents. Slides are catalogued both geographically and taxonomically; the geographic file is computerized. There are several other important collection resources. Unique in the world is the "New Species File," or Taxon Record, which includes in excess of 133,000 5X8 cards for both newly described taxa and previously described diatoms that have been taxonomically revised from 1933 to the present. These cards include descriptions, illustrations, locality and type information, and source references for both the current name and for the basionym taxon where applicable.

It includes approximately 220,000 slides (curated and non-curated), of which about 5,000 are types. Materials include both fossil and recent diatoms collected from fresh, brackish, and marine habitats. Microscopesandmonsters. John Carter, who I wrote about in my last-but-one post (“Remembering John Carter”) had a great interest in Achnanthes, the old genus to which Platessa bahlsii (see post of 12 March 2014) would have once belonged. Smithsonian Environmental Research... - Smithsonian Environmental Research Center. New Zealand Freshwater and Brackish Diatom Types. The diatoms, or Bacillariophyceae, are an extremely diverse group of microalgae, with global estimates of species ranging from 10,000 to 100,000 or more.

They exist as unicells or cell aggregates, and occur in both the oceans and freshwaters, with high ecological importance.