Billion Oyster Project. Robotic Kelp Farms Promise an Ocean Full of Carbon Neutral, Low Cost Energy. Renewable, carbon neutral energy is critical to a future where we’re not all living on rafts in the middle of a suddenly much larger ocean. 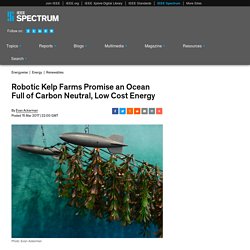 Happily, we’ve got lots of ways of generating renewable energy, like solar farms, wind farms, and hydropower. Despite this diversity, renewables are horrendously inefficient compared with the dense solid or liquid combustibles that come straight out of the ground, both in terms of the energy density that they represent, as well as the amount of physical space that it takes to harvest them. This is an often overlooked problem with renewable energy: Scaling up solar, wind, and hydro to make a dent in overall energy consumption takes up a significant amount of land area. Plus at some point, it starts to become impractical: There’s a finite amount of land area that is appropriate for and can be devoted to large-scale renewables. Not to mention that usually, these installations aren’t things that people want next door. Seaweed could be key ingredient for 3D printing BioPen.

Jan.20, 2014 Australian researchers are farming and processing seaweeds from the sea aimed at producing biomaterials such as ingredient for 3D printing BioPen. 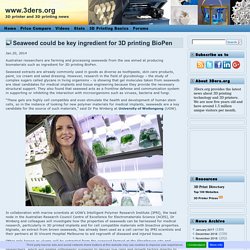 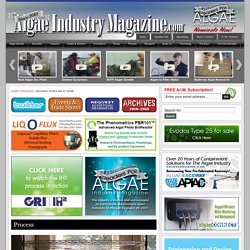 Aaron BaumAlgaeIndustryMagazine.com he popular image of algae farming is bubbling green columns and white-coated scientists, and seems out of reach for ordinary people. Is the experience of algae farming limited to professionals? A growing network of DIY algae farmers is proving that we can all participate, by creating successful algae ponds and growth tanks in our own homes.

These are not mere science projects. Climate crisis: seaweed, coffee and cement could save the planet. This month’s meeting in Paris marks the 21st annual occasion on which nations have met to try to deal with the climate problem. 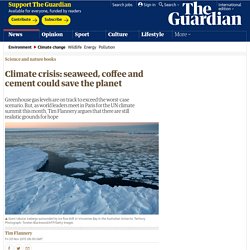 After two decades of failing to agree, there is finally hope that a deal will be reached, with action to commence in 2020, and run until 2030. The world wonders whether Paris will be a success. But it is already a success, to the extent that the existing, unconditional pledges to limit greenhouse gas emissions made by nations in the lead up to the meeting are sufficient to shift humanity from the disastrous trajectory we are currently on. But the long failure of the negotiations to limit emissions gases will be felt way beyond Paris. For the last decade, greenhouse gases emissions have tracked the worst case scenario of the Intergovernmental Panel on Climate Change. The runaway emissions of past decades have pushed average global temperatures to around 0.9C (1.7F) higher than they were prior to the industrial revolution. How seaweed can kelp us tackle climate change - Climate Council. Seaweed, previously the unwanted guest at your beach party, is now increasingly associated with sushi, superfoods, spa treatments and – amongst scientists, at least – solutions to climate change. 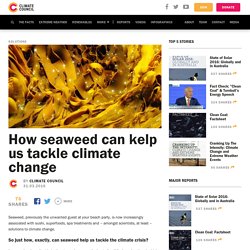 So just how, exactly, can seaweed help us tackle the climate crisis? Increased carbon dioxide in the atmosphere, mostly due to fossil fuel combustion, is driving rapid climate change. As the atmospheric carbon dioxide goes up, so too does the carbon dioxide in the oceans. We know that we need to stop burning fossil fuels, fast. But we also need to remove some of the carbon dioxide that's already in the air and oceans. And that’s where seaweed comes in. Like other plants, as seaweed grows it absorbs carbon dioxide. Calverts Co-operative: Design and Print. Alga Carta paper On the press-room floor this week, queued for printing, we have some Shiro Alga Carta - an Italian creative paper made from seaweed. 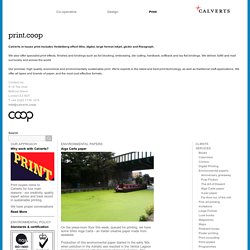 Production of this environmental paper started In the early '90s when pollution in the Adriatic sea resulted in the Venice Lagoon becoming swamped with thousands of tonnes of algae. This reduced the natural oxygen level in the water which in turn killed fish. AlgaeLab. Manabu Hangai Art Works / How to make the seaweed paper. This Furniture Is Made From Seaweed And Paper. 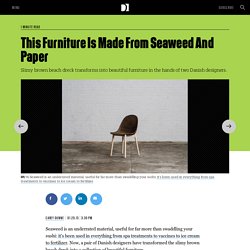 When she entered the school, the computer engineering major says she spent a lot of time hunkered down in the library, doing hours of research on behalf of the school’s nuclear reactor. She lived in a small apartment with three other women, but mostly hung out in her room. One year later, things look very different. Soaring ceilings, exposed piping, and glossy, concrete floors dominate the wide open industrial space.

Over here, there’s a gathering area defined by a colorful rug and modern couches and chairs; over there, meeting tables flocked by rolling white boards. Dr. Charles YARISH 05/07/14: Cultivation of Seaweeds.