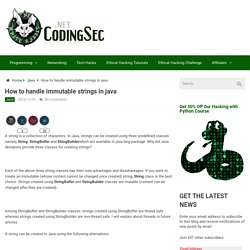 In Java, strings can be created using three predefined classes namely String, StringBuffer and StringBuilderwhich are available in java.lang package. Why did Java designers provide three classes for creating strings? Each of the above three string classes has their own advantages and disadvantages. Physicists say they've manipulated 'pure nothingness' and observed the fallout. According to quantum mechanics, a vacuum isn't empty at all. 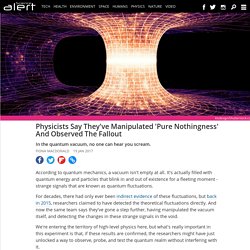 It's actually filled with quantum energy and particles that blink in and out of existence for a fleeting moment - strange signals that are known as quantum fluctuations. For decades, there had only ever been indirect evidence of these fluctuations, but back in 2015, researchers claimed to have detected the theoretical fluctuations directly. And now the same team says they've gone a step further, having manipulated the vacuum itself, and detecting the changes in these strange signals in the void.

We're entering the territory of high-level physics here, but what's really important in this experiment is that, if these results are confirmed, the researchers might have just unlocked a way to observe, probe, and test the quantum realm without interfering with it. This is where the quantum vacuum comes into it. Bmk-201701.1. Featcs. Featcs (@Feat_CS) FEAT. FEAT CS LOGO 1.