Analysing and presenting qualitative data. Interview transcripts, field notes and observations provide a descriptive account of the study, but they do not provide explanations.4 It is the researcher who has to make sense of the data that have been collected by exploring and interpreting them. 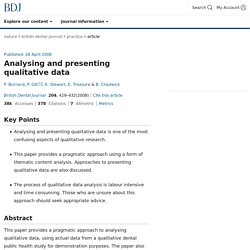 Quantitative and qualitative research differ somewhat in their approach to data analysis. Presenting Qual Data. The effects of visual congruence on increasing consumers’ brand engagement: An empirical investigation of influencer marketing on instagram using deep-learning algorithms for automatic image classification. The changing position of social media in 2020: What does it mean for marketers? New Data on Why People Hate Ads: Too Many, Too Intrusive, Too Creepy. Advertising is only getting more pervasive, obnoxious, and intrusive. 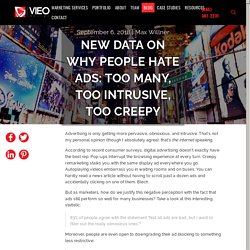 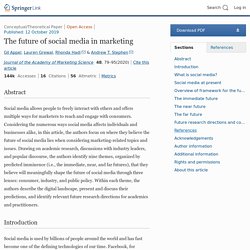 D., & Wetzels, M. (2015). Unraveling the personalization paradox: The effect of information collection and trust-building strategies on online advertisement effectiveness. 3 Reasons Why CMOs Should Embrace Experiential Marketing. Consumers have made it clear that, for the most part, commercials just don’t do it for them anymore. 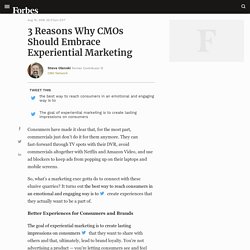 They can fast-forward through TV spots with their DVR, avoid commercials altogether with Netflix and Amazon Video, and use ad blockers to keep ads from popping up on their laptops and mobile screens. So, what’s a marketing exec gotta do to connect with these elusive quarries? It turns out the best way to reach consumers in an emotional and engaging way is to create experiences that they actually want to be a part of. Better Experiences for Consumers and Brands. Social Media Marketing is the Best Way Around Ad Blockers. Have you ever watched a YouTube video that didn’t have an ad? 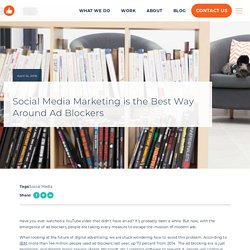 It’s probably been a while. But now, with the emergence of ad blockers, people are taking every measure to escape the invasion of modern ads. When looking at the future of digital advertising, we are stuck wondering how to avoid this problem. According to IBM, more than 144 million people used ad blockers last year, up 70 percent from 2014. The ad blocking era is just beginning, and despite major players (Apple, Microsoft, etc.) creating software to prevent it, people will continue finding loopholes around commercials.

Social Media Week: Influencer marketing no panacea to rise of ad-blockers. At a Social Media Week London fringe event hosted by agency Text100 last night, Tata's Matt Sykes and Microsoft's Devin Moore both agreed that it was important to declare when influencers had been paid to take part in campaigns - even if it was frustrating that that declaration could make the content seem less authentic to users. 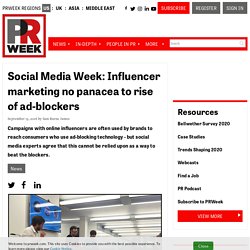 Moore, who is the global social lead for Microsoft's Windows and devices group, said that when he saw #spon or #ad on a post from a brand that he followed, his reaction was "ooh, why did you have to pay them? ". "There's an interesting trade off between Ethics and Brand Legitimacy" @DtmDevmo #SMWLDN #SMWOnlineCommunities — NRS Healthcare (@NRSHealthcare) September 14, 2016 As discussed in PRWeek UK's special edition on influencers, published last week, some PR professionals and marketers feel influencer marketing can combat the rising use of ad-blockers. 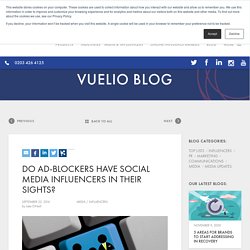 Speaking at a Social Media Week fringe event in London last week, Matt Sykes, head of social and content experiences at Tata Communications told the audience that he considered it just a matter of time before someone made a script which blocked sponsored content highlighted with a #ad, #spon or similar hashtag as dictated by industry watchdogs like the Advertising Standards Authority (ASA). Social Media Didn’t Experience the Pandemic Bump You May Have Expected - Insider Intelligence Trends, Forecasts & Statistics. The lack of user growth may come as a surprise to those who have seen recent studies showing that consumers are engaging more heavily with social media during the pandemic. 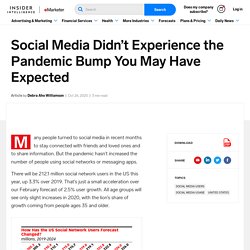 For example, GlobalWebIndex found in a May 2020 study (fielded across 20 countries including the US) that 43% of social networkers ages 16 to 64 said they were spending more time on social media, and 16% said they planned to continue that behavior post-pandemic. Among heavy social network users (those who spent 4 hours or more on an average day), 54% reported spending more time, while 26% said they expected to continue that behavior post-pandemic.

In the US, the pandemic will help drive an 8.8% increase in the average amount of time adult social network users spend with social platforms this year, reaching 82 minutes per day, according to our April 2020 forecast. Emarketer. Mintel Portal. Full-text electronic journals, databases and print journals. 19892. Socialbakers COVID 19 Impact Report. 3 Reasons Why CMOs Should Embrace Experiential Marketing. Consumers have made it clear that, for the most part, commercials just don’t do it for them anymore. 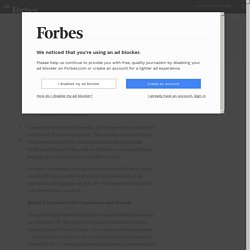 They can fast-forward through TV spots with their DVR, avoid commercials altogether with Netflix and Amazon Video, and use ad blockers to keep ads from popping up on their laptops and mobile screens. So, what’s a marketing exec gotta do to connect with these elusive quarries? It turns out the best way to reach consumers in an emotional and engaging way is to create experiences that they actually want to be a part of. Better Experiences for Consumers and Brands The goal of experiential marketing is to create lasting impressions on consumers that they want to share with others and that, ultimately, lead to brand loyalty.

A Freeman Global Brand Experience Study reports that a third of CMOs plan to devote 21-50 percent of their budget to experiential marketing efforts over the next several years. 1. 2. Big data is also an integral part of experiential marketing. Why Experiential Marketing Is the Future of Business. All long-lasting companies are alike. 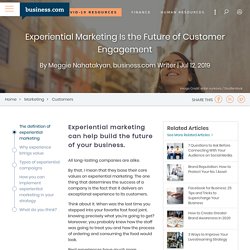 If you haven’t heard of it yet, ‘The Social Dilemma’ is the new Netflix documentary that launched this August 2020 to an eager audience, after being selected for the Sundance Film Festival 2020. What’s all the fuss about? You probably think that you’ve heard it all before when it comes to the subjects of social media addiction, personal data protection and fake news, but this documentary offers something different. It’s led by interviews with the great minds of Silicon Valley that actually created Facebook, Twitter, Instagram and Pinterest, such as the co-inventor of the Facebook “Like” button, Justin Rosenstein, and the former President of Pinterest and former Director of Monetization at Facebook, Tim Kendall, to name just a few. It’s this element that makes us sit up and listen.

Why is it relevant? The world has long recognised the benefits of social media, from connecting families across borders, to acting as an organisational tool for activists. Paying for reach Market dominance. Opinion: The social dilemma for advertisers: Is it ethical? How does Zara survive despite minimal advertising? There’s no doubting Zara’s status as an international fashion retail giant. The fast-fashion experience it provides could be one of the many reasons why it has consistently remained popular among consumers worldwide, especially those who constantly seek the latest fashion trends. The Digital Detox – why people are removing social apps but not deleting them. The social landscape is currently in flux. Platforms are seeing immense shifts in the way people engage with their services.

Brandnation 2020 - the year of-the digital detox. It’s a scary statistic, but 45% of the world’s population are using some form of social media. User numbers in 2020 have topped previous predictions, exceeding 3.484 billion users. A quick look at these numbers might suggest that social media shows no signs of slowing its growth. The Impact of Coronavirus on Social Media Engagement for Brands. Birmingham City University - Sign In. You Heard It Here First: Digital detox. Richard is a Senior Trends Consultant, bringing the latest consumer trends to Mintel clients through bespoke presentations and represents Mintel at global conferences. Consumer. Why Facebook Is Bad, Twitter Might Be a Little Bit Good, and Social Media Is Rotting Our Brains. As we talked, I kept getting distracted by the video chat and my ability to move around in virtual space, the possibility that the two of us could make actual eye contact.

How Ad-blockers Might Change The Future of Advertising. While digital marketing has undergone significant change in the past decade, much of this change has been incremental. Advertising and social media face fresh trust issues amid global crisis. Two global reports have surfaced in the past week indicating a desperate need for the advertising and media industries to work together to rebuild public trust.

But amid an enormous public health crisis, can consumers’ concerns be remedied? Earlier this week, Kantar’s Dimension study revealed a brewing mistrust among consumers towards both advertisers and social media platforms. The report surveyed 8,000 people in eight markets, including the US, UK and China, which have a combined total ad spend of $400bn. It found advertising to be the least likely source people would use to garner information about a business, with just 14% saying they trust advertisers in this respect.

You Heard It Here First: Digital detox. Birmingham City University - Sign In. New Data on Why People Hate Ads: Too Many, Too Intrusive, Too Creepy.

What is "brain hacking"? Tech insiders on why you should care. The following script is from “Brain Hacking,” which aired on April 9, 2017. Anderson Cooper is the correspondent. Waking Up Podcast #71 — What is Technology Doing to Us? Tristan Harris: How a handful of tech companies control billions of minds every day. Center for Humane Technology. Center for Humane Technology. What The Social Dilemma Gets Wrong. Audible.co. We need to rethink social media before it's too late. We've accepted a Faustian bargain.