A Beautiful Mind (9/11) Movie CLIP - The Baby's Bath (2001) HD. How Fellowship of the Ring Builds Tension. Authentic Characters. Come and join over thousands of writers and authors and gain access to The Writers Tribe! 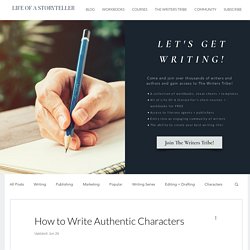 BAO official HD - Pixar Animation 2018. Build Ensemble. Character Relationships. Can there be more than one Influence Character through the arc of the main character's throughline? 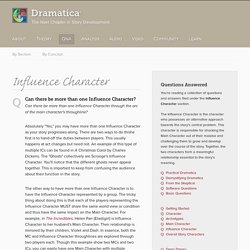 Absolutely "Yes," you may have more than one Influence Character as your story progresses along. There are two ways to do thishe first is to hand-off the duties between players. This usually happens at act changes but need not. An example of this type of multiple ICs can be found in A Christmas Carol by Charles Dickens. The "Ghosts" collectively are Scrooge's Influence Character. The other way to have more than one Influence Character is to have the Influence Character represented by a group. Do I have to show that the impact character has really changed at the end of my script? A: If your Influence Character is a change character, you should show it. For example, the character may go from indifference to caring (Sam Gerard in The Fugitive), or independent to committed (Jerry Maguire). No. Die Hard (#1). It is quite an acceptable situation and in no way weakens the OS. No. Creating Dramatic Tension. Drama Games. Hot Seating. What is Hot Seating? 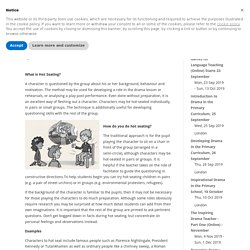 A character is questioned by the group about his or her background, behaviour and motivation. The method may be used for developing a role in the drama lesson or rehearsals, or analysing a play post-performance. Even done without preparation, it is an excellent way of fleshing out a character. Characters may be hot-seated individually, in pairs or small groups.

The technique is additionally useful for developing questioning skills with the rest of the group. How do you do hot seating? The traditional approach is for the pupil playing the character to sit on a chair in front of the group (arranged in a semi-circle), although characters may be hot-seated in pairs or groups. If the background of the character is familiar to the pupils, then it may not be necessary for those playing the characters to do much preparation. Examples. Hot Seat Drama Game. On set for the final chapter of 'Harry Potter and the Deathly Hallows: Part 2' Personification. Story Elements. Story Elements For Kids: What Is a Character? Story Elements for Kids: What Is a Setting? Thought Tracking. Thought tracking (also called thought tapping) is a quick fire strategy enabling children to verbally express their understanding of characters and situations without the need for rehearsal. 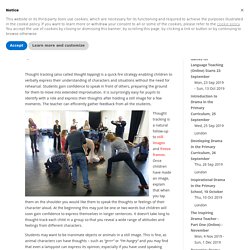 Students gain confidence to speak in front of others, preparing the ground for them to move into extended improvisation. It is surprisingly easy for pupils to identify with a role and express their thoughts after holding a still image for a few moments. The teacher can efficiently gather feedback from all the students. Thought tracking is a natural follow-up to still images and freeze frames.

Once children have made an image, explain that when you tap them on the shoulder you would like them to speak the thoughts or feelings of their character aloud. Students may want to be inanimate objects or animals in a still image. The video is a sample from the Power Up online course by Drama Resource and NILE Online (available from January 2018). Thought Tracking.

Definition A strategy in which the teacher circulates, tapping students on the shoulder to prompt them to focus on their inner thoughts and feelings. 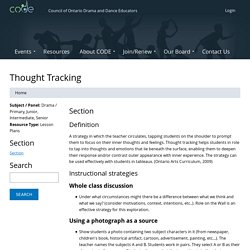 Thought tracking helps students in role to tap into thoughts and emotions that lie beneath the surface, enabling them to deepen their response and/or contrast outer appearance with inner experience.