Legislation of sexuality & pleasure. The Coming Collapse. Chelsea Clinton just declared war on Trump and his entire administration in brutally honest interview. Chelsea Clinton has developed a reputation as someone so preternaturally nice that she can take the most offensive insults hurled her way by simian-brained right-wingers and reply with a kind and even-tempered response that makes the author of the attack look even worse than if she had justifiably skewered them. 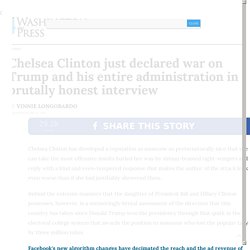 Behind the extreme manners that the daughter of President Bill and Hillary Clinton possesses, however, is a simmeringly brutal assessment of the direction that this country has taken since Donald Trump won the presidency through that quirk in the electoral college system that awards the position to someone who lost the popular tally by three million votes. These Magic Kids (Enough is Enough) The Roots of White Supremacy are in Our Bodies. By Madelanne Rust-D’Eye. 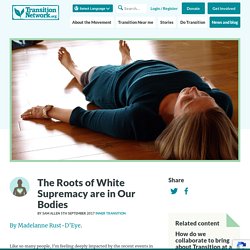 So let’s talk about the hypocrisy of entrepreneurs who claim that their work is all about empowering others, and yet, when the time comes to speak up about white supremacist Nazis and racial injustice, they are silent. 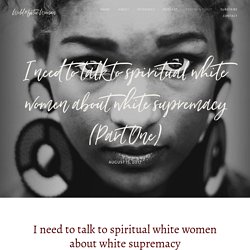 As my friend Jess Sells Wertman said, “Know the difference between a leader and a marketer. Many marketers like to style themselves as leaders, but that doesn't mean they ARE.” Fixing Rape Culture is a Big Project. Here's Step One. It Seems to Me: What young women may not know. It came to my attention recently, after the March on Washington, that many young women are completely satisfied with their lives right now. 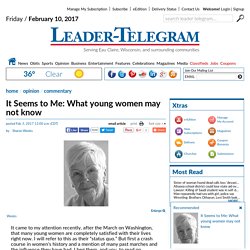 I will refer to this as their “status quo.” But first a crash course in women’s history and a mention of many past marches and the influence they have had. I beg them, and you, to read on. One thing I want to point out, as I am going to discuss women’s rights from more than a hundred years ago to 2017, is what I think these young women are missing. Women’s history has been basically excluded from the classroom text books in public schools. The Women’s March on Washington has released its platform, and it is unapologetically progressive. David McNew/AFP/Getty Images The Women’s March on Washington has released its official policy platform, a far-reaching four-page statement that takes clear stances on reproductive rights, immigration reform, and worker’s issues. 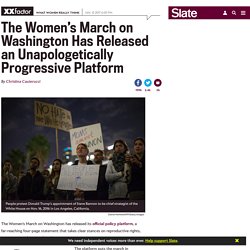 Christina Cauterucci is a Slate staff writer. The platform puts the march in support of the usual feminist suspects: the long-overdue Equal Rights Amendment, equal pay, paid family leave, and an end to violence against women. But it doesn’t shy away from issues that promise to rankle at least a few people who were planning on attending the Jan. 21 march. Organizers have laid out an unapologetically radical, progressive vision for justice in America, placing the march in the context of other past and ongoing movements for equality. The platform supports increased accountability for perpetrators of police brutality and racial profiling, demanding the demilitarization of American law enforcement and an end to mass incarceration.

The Official Women's March Attendance Numbers From Around the World Are In… You Are Not Equal. I’m Sorry. Say Thank You. 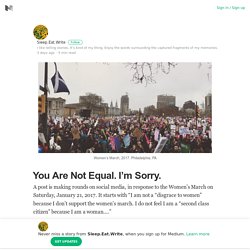 Week 9: Experts in authoritarianism advise to keep a list of things subtly changing around you, so… Published January 14, 2017 This was not a good week for our country: this is the longest, and most troubling list. 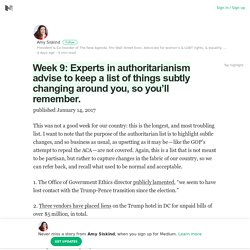 I want to note that the purpose of the authoritarian list is to highlight subtle changes, and so business as usual, as upsetting as it may be — like the GOP’s attempt to repeal the ACA — are not covered. Again, this is a list that is not meant to be partisan, but rather to capture changes in the fabric of our country, so we can refer back, and recall what used to be normal and acceptable. 1. The case for despair is made. Now let’s start to get out of the mess we’re in. With one breath, the friends of power told us that global capitalism was a dynamic, disruptive force, the source of constant innovation and change. 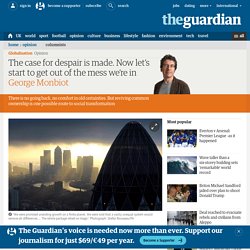 The Great Female Post-Election Libido Crash. As a sex educator and body empowerment coach for women, the results are in. 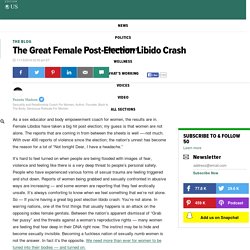 Female Libidos have taken a big hit post election; my guess is that women are not alone. The reports that are coming in from between the sheets is well —-not much. With over 400 reports of violence since the election; the nation’s unrest has become the reason for a lot of “Not tonight Dear, I have a headache.” It’s hard to feel turned on when people are being flooded with images of fear, violence and feeling like there is a very deep threat to people’s personal safety.

People who have experienced various forms of sexual trauma are feeling triggered and shut down. Tips for a Post Election Libido Recover Plan For Women 1. 2. 'While There is Despair, I Am Not Hopeless' Why I Do Not Support The Women's March on Washington — brittany t. oliver. While I know you must be extremely proud of all the recent news coverage you've received, don't forget to check out Fusion's piece of your protest appropriation. 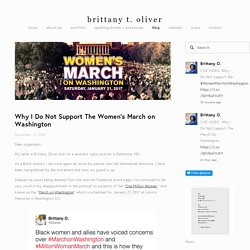 During the suffrage movement from 1848-1923, Black women were not even seen as human. White women who led equality campaigns in Washington, D.C. requested that black suffragists walk at the back of their parades. As a result, black women chose not to march at all and refused to participate. Isn't it funny how history repeats itself? This is why so many Black women and Black people of various identities struggle with connecting to mainstream feminism. Regardless of your intentions, white feminists should not be speaking for Black women or women of color unless asked to do so because that is what allyship looks like.

Gloria Steinem: After Trump's Election, the U.S. Like a Battered woman. The Best Advice ever from the Dalai Lama about Trump. Get elephant's newsletter A lot of people were puzzled when Trump won the U.S. presidential election. Blogs on what to do are circulating the internet like crazy. Who’s better than the Dalai Lama to give advice during this distressing period? I attended the Dalai Lama’s birthday celebration in Ladakh, India in 2015. Living Through the Death of Capitalism – Extra Newsfeed. Feminism and the Election: The Gift of Acceleration - Kelly Brogan MD.