Connectedness & Health: The Science of Social Connection - The Center for Compassion and Altruism Research and Education. Social connection improves physical health and mental and emotional well-being. 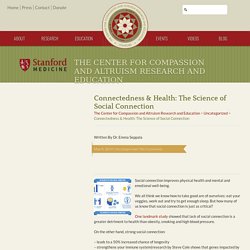 The Science of Cultivating Connection. The neuroscience behind human connection has broad implications for how we live our daily lives. 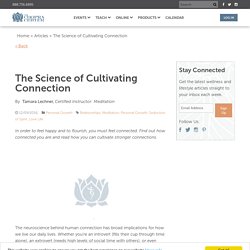 Social Connection Makes a Better Brain. This article was originally published in The Atlantic Monthly. 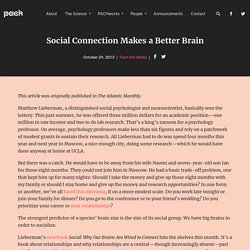 Matthew Lieberman, a distinguished social psychologist and neuroscientist, basically won the lottery. This past summer, he was offered three million dollars for an academic position—one million in raw income and two to do lab research. That’s a king’s ransom for a psychology professor. On average, psychology professors make less than six figures and rely on a patchwork of modest grants to sustain their research. All Lieberman had to do was spend four months this year and next year in Moscow, a nice enough city, doing some research—which he would have done anyway at home at UCLA. But there was a catch. The strongest predictor of a species’ brain size is the size of its social group. Why We Are Wired to Connect. When we experience social pain — a snub, a cruel word — the feeling is as real as physical pain. 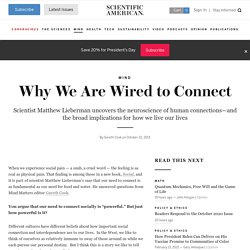 That finding is among those in a new book, Social, and it is part of scientist Matthew Lieberman’s case that our need to connect is as fundamental as our need for food and water. He answered questions from Mind Matters editor Gareth Cook. The Science Of Human Connection And Wellness In A Digitally Connected World. Decoding | Recoding The Connection of Disconnection And Loneliness The most precious commodities on this planet are our health, love, and happiness. 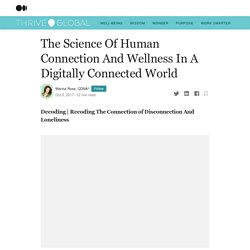 Regardless of what we accomplish and accumulate in life, we are unable to take it with us. In the fast paced, consumer driven, social media shared world that we live in today, success and happiness are often defined by the status of what we achieve, and the value of the things that we own. Everywhere we look, we are inundated with the same message: the measure of our self-worth is directly equal to the measure of our material wealth. Social Connection Makes a Better Brain. What’s remarkable about the default network, according to Lieberman’s research, is that it looks almost identical to another brain configuration—the one used for social thinking or “making sense of other people and ourselves,” as he writes: “The default network directs us to think about other people’s minds—their thoughts, feelings, and goals.” 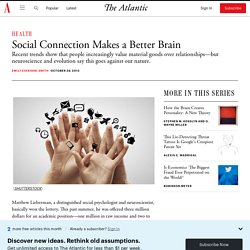 Whenever it has a free moment, the human brain has an automatic reflex to go social. Why would the brain, which forms only 2 percent of our body weight but consumes 20 percent of its energy, use its limited resources on social thinking, rather than conserving its energy by relaxing? The power of human connection. Relationship quality key to happiness for humans 'hardwired for connection' - Science News - ABC News. One of the most powerful lessons I've learned is about the power of connection. 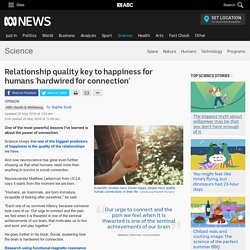 In good company: Why we need other people to be happy. For a lot of people, 2017 meant trying times. 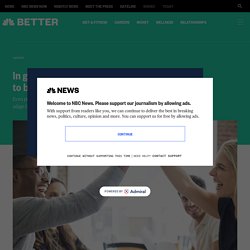 And divisiveness. We fought with politicians, neighbors, family, friends, the media, men and strangers we’ve never even met, thanks to social media. It’s been enough to make one want to try their luck on a desert island — anywhere without WiFi. Our hope for 2018? Perhaps it’s remembering that as much as the people around us can drive us up the wall, no man is an island. Connection Is a Core Human Need, But We Are Terrible at It. Father, Son, Holy Sprit : 3 persons, 1 great relationship. I’ll bet you’ve never thought that the Trinity and your relationships have much to do with each other, right? 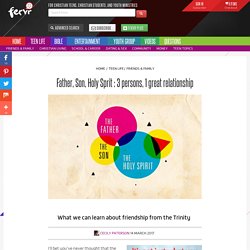 You’d be wrong. They’ve got everything to do with each other. Because God is three persons in one, he relates in certain ways. Connected: Humanity’s Design in the Biblical Story - The Bible Project blog. Why Getting Connected Matters. The world has never been more connected. 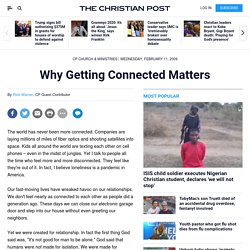 Companies are laying millions of miles of fiber optics and shooting satellites into space. Kids all around the world are texting each other on cell phones – even in the midst of jungles. Yet I talk to people all the time who feel more and more disconnected. They feel like they're out of it. In fact, I believe loneliness is a pandemic in America. Our fast-moving lives have wreaked havoc on our relationships. Yet we were created for relationship. Pastor, one of the crucial purposes of your church is to help alleviate this sense of disconnection. When I do that, I often use four great word pictures of the New Testament church. The Power of Connectedness - FaithGateway.

God uses people to form people. That is why what happens between you and another person is never merely human-to-human interaction — the Spirit longs to be powerfully at work in every encounter. Referring to this dynamic, some writers of Scripture speak of “the fellowship of the Spirit.” Fellowship has become a churchy word that suggests basements and red punch and awkward conversation. But it is really a word for the flow of rivers of living water between one person and another, and we cannot live without it. An academic journal called The Journal of Happiness Studies publishes studies using the tools of research to identify what makes human life flourish.

Spending meaningful time with people who care about us is indispensable to human flourishing.