CCInformHowToIdentifyCoerciveAndControllingBehaviour. Action needed to tackle domestic abuse of over-60s, says Age UK. More than 200,000 people aged 60 to 74 suffered domestic abuse in England and Wales in one year, according to new figures from Age UK, which warned that the total could be higher due to unrecorded abuse. 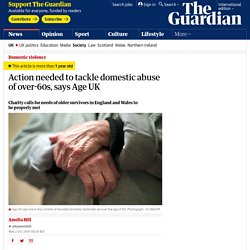 The charity revealed that one in four victims of recorded domestic homicides were over the age of 60. It said it feared for the safety of thousands more due to people’s reluctance or inability to report abuse by loved ones or carers. The National Crime Survey does not record data for people over the age of 74, so many older people were not included in the figures, Age UK said. “There’s a widespread misconception that domestic abuse only happens to younger people but sadly hundreds of thousands of older people are affected, too,” said Caroline Abrahams, Age UK’s charity director. “It’s high time that this was fully recognised by the law, policy and practice so that the needs of older survivors can be identified and properly met.” Intimate Partner Abuse Can Lead to Depression, Suicidal Thoughts in Old Age - News. 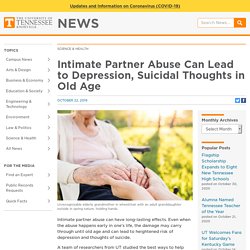 Even when the abuse happens early in one’s life, the damage may carry through until old age and can lead to heightened risk of depression and thoughts of suicide. A team of researchers from UT studied the best ways to help older adults who have experienced this type of abuse. The lead researcher was graduate student Sukyung Yoon, who did the work as part of her dissertation in UT’s College of Social Work. Yoon has now finished her PhD and joined the social work faculty at the University of Wyoming. Other authors were the members of Yoon’s dissertation committee: Professor and Associate Dean for Academics Sherry Cummings, Professor and Associate Dean for Research William Nugent, and Associate Professor and Director of the Social Work Office of Research and Public Service Shandra Forrest-Bank.

They found that problem-focused coping was a protective factor while emotion-based coping was a risk factor among the sample population. Cafcass.gov. Find out about healthy relationships, relationship abuse,... Healthy-Relationship-Workbook. Using-Children-Wheel. BBC iPlayer - Is This Coercive Control? Identifying-and-mitigating-gender-based-violence-risks-within-the-COVID-19-response. Jackson Katz: Violence against women—it's a men's issue. Ppl often stay in abusive relationships bc of something called 'trauma bonding' — here are the signs it's happening to you. Ian dooley / Unsplash People often don't even realise they are in an abusive relationship. 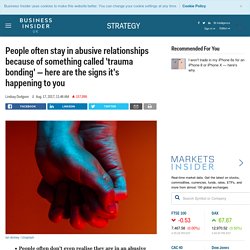 It can be hard for others to understand why someone stays with an abusive partner. It's often because of something called "trauma bonding," where you become addicted to the hormonal rollercoaster an abuser sends you on. Those who have never been in an abusive relationship struggle to understand how people remain in one for so long. If somebody was mistreating you, "why did you stick around? " For survivors, this can be a really tough question to answer. This is because we are conditioned to believe abuse is always physical. Over half of UK women killed by men die at hands of partner or ex. More than half the women killed by men in the UK in 2018 were killed by a current or former partner, many after they had taken steps to leave, according to a report on femicide. 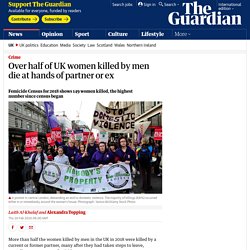 The most common method of murder was a sharp instrument, with strangulation or asphyxiation the second most common. Domestic violence kills 15 times as many as terrorism in Britain. Domestic violence kills 15 times as many people in Britain as terrorism, say campaigners who want the police to be given more money to tackle the problem. 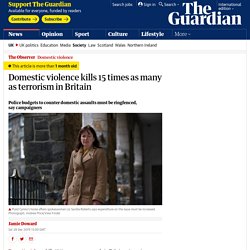 The huge disparity is highlighted in figures obtained from official sources by victims’ rights campaigners, who say the police budget for combating domestic violence must be ringfenced, as it is for terrorism. Official figures show there were 1,870 domestic murders in England and Wales between 2000 and 2018, compared with 126 that were terrorism-related. The vast majority of domestic murder victims were women. 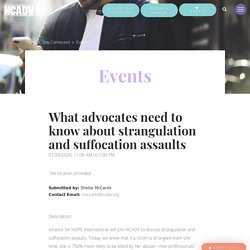 Today, we know that if a victim is strangled even one time, she is 750% more likely to be killed by her abuser. Register now to reserve your spot. Thanks for sharing! 18 Ways to Support Children Who Witness Domestic Violence. An estimated 15.5 million children in the U.S. live in a household where partner violence has occurred at least once in the last year, with 7 million of those children witnessing severe violence. 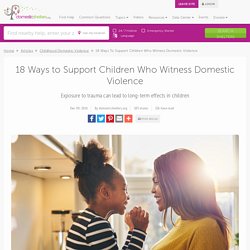 Exposure to that kind of trauma can harm children of all ages. According to the Centers for Disease Control, adverse childhood experiences are linked to: Risky health behaviors Chronic health conditions Shorter life expectancy A child’s best hope is to bond with other caregivers and experience caring and compassionate relationships through them. “Caregivers and providers need to support and facilitate healthy, positive, nurturing relationships with safe adults, whether that’s the nonviolent caregiver or other family members involved with caring for the child. Articles - CDV. Through Our Eyes: Children, Violence, and Trauma. Overview Too many children have been exposed to crime, abuse, and violence in their homes, schools, and communities. 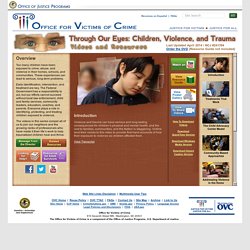 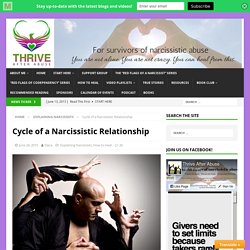 Walker developed what’s referred to as “the cycle of abuse.” In this cycle, there are 4 main stages: 1. Tension building; 2. Incident; 3. Reconciliation; and 4. Somewhere along the way I came across a lesser-known cycle of abuse (but I can’t find who came up with it), that puts a spin on the original cycle of abuse. What is The Duluth Model? - Domestic Abuse Intervention Programs. Since the early 1980s, Duluth—a small community in northern Minnesota—has been an innovator of ways to hold batterers accountable and keep victims safe. 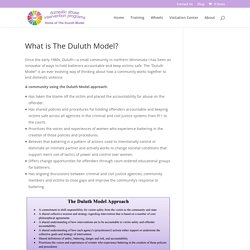 The “Duluth Model” is an ever evolving way of thinking about how a community works together to end domestic violence. A community using the Duluth Model approach: Narrative conversations with mandated men by Tod-Augusta Scott - The Dulwich ... Welcome to this Friday Afternoon presentation. This afternoon, Tod-Augusta Scott, from Nova Scotia Canada, shares his work in relation to narrative conversations with men who have engaged in violence against their partners. Below you will also find links to an interview with Tod, and further references and websites.

We hope you will join the discussion forum on this important area of work. Further reading (free to download) Augusta-Scott.T. (2006). Bibliography. Triangulation Explained. Pandoris Viltis came across this most excellent post about triangulation that I thought was spot-on. I attempted to contact the original author of the piece a few days ago to ask for permission to re-post the majority of the article here but as of yet I've not heard back from her about it.

I don't usually do re-posts without the permission of the author, but I've made an exception in this case because I feel it's too good not to share. I have taken the liberty of changing the pronouns in the original post from masculine to feminine for sake of clarity and because I felt I was reading NMIL in the description therein. Bolding for emphasis, mine. Help for Abused Men: Escaping domestic violence by women or domestic partners. Help for abused men: You’re not alone If you're a man in an abusive relationship, it's important to know that you're not alone. It happens to men from all cultures and all walks of life. Figures suggest that as many as one in three victims of domestic violence are male. However, men are often reluctant to report abuse by women because they feel embarrassed, or they fear they won't be believed, or worse, that police will assume that since they're male they are the perpetrator of the violence and not the victim.

An abusive wife or partner may hit, kick, bite, punch, spit, throw things, or destroy your possessions. Domestic Violence and Abuse: Signs of Abuse and Abusive Relationships. Understanding domestic violence and abuse Domestic abuse, also known as spousal abuse, occurs when one person in an intimate relationship or marriage tries to dominate and control the other person. Domestic abuse that includes physical violence is called domestic violence. Domestic violence and abuse are used for one purpose and one purpose only: to gain and maintain total control over you. More than 40% of domestic violence victims are male, report reveals. About two in five of all victims of domestic violence are men, contradicting the widespread impression that it is almost always women who are left battered and bruised, a new report claims. Men assaulted by their partners are often ignored by police, see their attacker go free and have far fewer refuges to flee to than women, says a study by the men's rights campaign group Parity.

The charity's analysis of statistics on domestic violence shows the number of men attacked by wives or girlfriends is much higher than thought. Its report, Domestic Violence: The Male Perspective, states: "Domestic violence is often seen as a female victim/male perpetrator problem, but the evidence demonstrates that this is a false picture. " Data from Home Office statistical bulletins and the British Crime Survey show that men made up about 40% of domestic violence victims each year between 2004-05 and 2008-09, the last year for which figures are available.

The unheard victims of violence - The Hindu. Rape. Lately, this four letter word has been appearing with frightening regularity in the Indian media as gruesome cases, including the recent gang rape of a Mumbai photojournalist, get reported widely. These rape survivors try and pick up the pieces of their lives, deal with the physical and psychological consequences and fight for justice with stoic perseverance. Who Are the Victims of Domestic Violence? Domestic violence can happen in any relationship, regardless of ethnic group, income level, religion, education or sexual orientation. Leslie Morgan Steiner: Why domestic violence victims don't leave. Amp.rnz.co. The 'She is not your rehab' movement is empowering men to address domestic violence by healing from past traumas through honest conversations. Matt Brown, centre, and 'She is not your rehab' supporters. Photo: Supplied She Is Not Your Rehab was started by men from Christchurch barbershop My Father's Barbers.

The barbershop is known as a place "where men go to heal" and is now calling men to deal with their childhood pain and abuse, instead of projecting it onto their relationships. Owner Matt Brown, an author, speaker and internationally-acclaimed barber, said his business had become a safe space where men could open up about the issues affecting them.

UNILAD Sound - Music Video Raises Awareness About Domestic Abuse. ‘It’s like you go to abuse school’: how domestic violence always follows the ... It’s a sparkling Saturday afternoon in Bella Vista, in Sydney’s Bible belt. The people who live here have faith and money: the streets are immaculate and the houses are huge. Outside one house, a pile of household items is all that blights the row of manicured lawns.