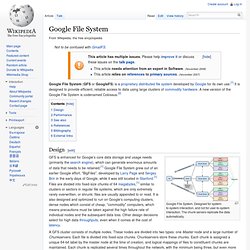 It is designed to provide efficient, reliable access to data using large clusters of commodity hardware. A new version of the Google File System is codenamed Colossus.[2] Design[edit] Google File System. Designed for system-to-system interaction, and not for user-to-system interaction. A GFS cluster consists of multiple nodes. The Master server doesn't usually store the actual chunks, but rather all the metadata associated with the chunks, such as the tables mapping the 64-bit labels to chunk locations and the files they make up, the locations of the copies of the chunks, what processes are reading or writing to a particular chunk, or taking a "snapshot" of the chunk pursuant to replicate it (usually at the instigation of the Master server, when, due to node failures, the number of copies of a chunk has fallen beneath the set number).

Tiered service. Tiered service structures allow users to select from a small set of tiers at progressively increasing price points to receive the product or products best suited to their needs. 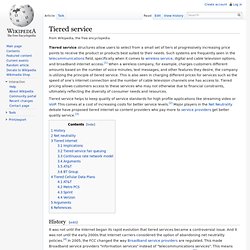 Such systems are frequently seen in the telecommunications field, specifically when it comes to wireless service, digital and cable television options, and broadband internet access.[1] When a wireless company, for example, charges customers different amounts based on the number of voice minutes, text messages, and other features they desire, the company is utilizing the principle of tiered service. This is also seen in charging different prices for services such as the speed of one's internet connection and the number of cable television channels one has access to. Tiered pricing allows customers access to these services who may not otherwise due to financial constraints, ultimately reflecting the diversity of consumer needs and resources. Thin provisioning. Thin provisioning is the act of using virtualization technology to give the appearance of having more physical resources than are actually available. If a system always has enough resource to simultaneously support all of the virtualized resources, then it is not thin provisioned.

The term thin provisioning is applied to disk later in this article, but could refer to an allocation scheme for any resource. For example, real memory in a computer is typically thin provisioned to running tasks with some form of address translation technology doing the virtualization. Each task believes that it has real memory allocated. The sum of the allocated virtual memory assigned to tasks is typically greater than the total of real memory. The efficiency of thin or thick/fat provisioning is a function of the use case, not the technology. Just in time allocation is not the same as thin provisioning. Fibre Channel. Fibre Channel, or FC, is a high-speed network technology (commonly running at 2-, 4-, 8- and 16-gigabit per second rates) primarily used to connect computer data storage.[1][2] Fibre Channel is standardized in the T11 Technical Committee of the International Committee for Information Technology Standards (INCITS), an American National Standards Institute (ANSI)-accredited standards committee. 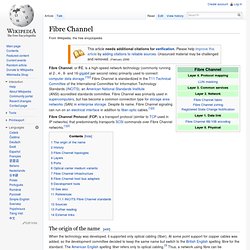 Fibre Channel was primarily used in supercomputers, but has become a common connection type for storage area networks (SAN) in enterprise storage. Despite its name, Fibre Channel signaling can run on an electrical interface in addition to fiber-optic cables.[1][2] Fibre Channel Protocol (FCP) is a transport protocol (similar to TCP used in IP networks) that predominantly transports SCSI commands over Fibre Channel networks.[1][2] The origin of the name[edit] When the technology was developed, it supported only optical cabling (fiber). History[edit] * – Throughput for duplex connections. NAS (Network Attached Storage) Network-attached storage (NAS) is file-level computer data storage connected to a computer network providing data access to a heterogeneous group of clients. 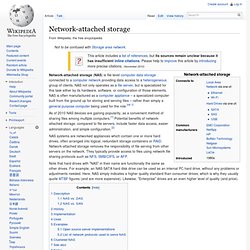 NAS not only operates as a file server, but is specialized for this task either by its hardware, software, or configuration of those elements. NAS is often manufactured as a computer appliance – a specialized computer built from the ground up for storing and serving files – rather than simply a general purpose computer being used for the role. [nb 1] As of 2010[update] NAS devices are gaining popularity, as a convenient method of sharing files among multiple computers.[1] Potential benefits of network-attached storage, compared to file servers, include faster data access, easier administration, and simple configuration.[2] Note that hard drives with "NAS" in their name are functionally the same as other drives. 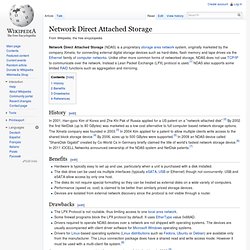 Unlike other more common forms of networked storage, NDAS does not use TCP/IP to communicate over the network. Instead a Lean Packet Exchange (LPX) protocol is used.[1] NDAS also supports some limited RAID functions such as aggregation and mirroring. iSCSI. In computing, iSCSI ( i/aɪˈskʌzi/ eye-SKUZ-ee) is an acronym for Internet Small Computer System Interface, an Internet Protocol (IP)-based storage networking standard for linking data storage facilities. 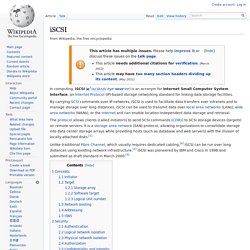 By carrying SCSI commands over IP networks, iSCSI is used to facilitate data transfers over intranets and to manage storage over long distances. iSCSI can be used to transmit data over local area networks (LANs), wide area networks (WANs), or the Internet and can enable location-independent data storage and retrieval. Unlike traditional Fibre Channel, which usually requires dedicated cabling,[a] iSCSI can be run over long distances using existing network infrastructure.[2] iSCSI was pioneered by IBM and Cisco in 1998 and submitted as draft standard in March 2000.[3] Concepts[edit] In essence, iSCSI allows two hosts to negotiate and then exchange SCSI commands using Internet Protocol (IP) networks. SAN (Storage Area Network) A SAN does not provide file abstraction, only block-level operations. 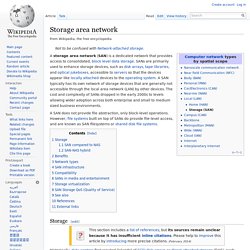 However, file systems built on top of SANs do provide file-level access, and are known as SAN filesystems or shared disk file systems. Storage[edit] Historically, data centers first created "islands" of SCSI disk arrays as direct-attached storage (DAS), each dedicated to an application, and visible as a number of "virtual hard drives" (i.e. LUNs).[1] Essentially, a SAN consolidates such storage islands together using a high-speed network. Operating systems maintain their own file systems on their own dedicated, non-shared LUNs, as though they were local to themselves. Despite such issues, SANs help to increase storage capacity utilization, since multiple servers consolidate their private storage space onto the disk arrays.