VMware vSphere: Storage Virtualization & Storage Management. Affordable shared storage options for VMware vSphere. What you will learn in this tip: In order to use many of the advanced features in VMware vSphere, you need a shared... 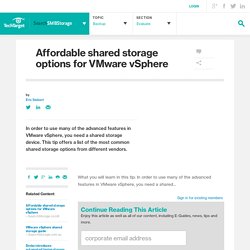 By submitting your email address, you agree to receive emails regarding relevant topic offers from TechTarget and its partners. You can withdraw your consent at any time. Contact TechTarget at 275 Grove Street, Newton, MA. You also agree that your personal information may be transferred and processed in the United States, and that you have read and agree to the Terms of Use and the Privacy Policy. storage device. You can use VMware vSphere without a shared storage device, but it limits the amount of advanced features that you can use with it. How to Speed Up Your NAS With iSCSI. Many technologies originally intended for the enterprise end up trickling down into the consumer market at some point. 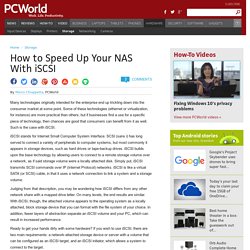 Some of these technologies (ethernet or virtualization, for instance) are more practical than others; but if businesses find a use for a specific piece of technology, then chances are good that consumers can benefit from it as well. Such is the case with iSCSI. iSCSI stands for Internet Small Computer System Interface. SCSI (sans i) has long served to connect a variety of peripherals to computer systems, but most commonly it appears in storage devices, such as hard drives or tape-backup drives. iSCSI builds upon the base technology by allowing users to connect to a remote storage volume over a network, as if said storage volume were a locally attached disk. Simply put, iSCSI transmits SCSI commands over IP (Internet Protocol) networks. iSCSI is like a virtual SATA (or SCSI) cable, in that it uses a network connection to link a system and a storage volume. Pros and Cons. Fibre Channel vs. iSCSI: The war continues. In the beginning there was Fibre Channel (FC), and it was good. 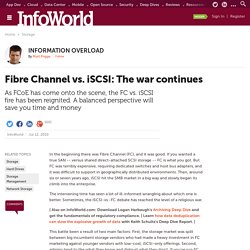 If you wanted a true SAN -- versus shared direct-attached SCSI storage -- FC is what you got. But FC was terribly expensive, requiring dedicated switches and host bus adapters, and it was difficult to support in geographically distributed environments. Then, around six or seven years ago, iSCSI hit the SMB market in a big way and slowly began its climb into the enterprise. The intervening time has seen a lot of ill-informed wrangling about which one is better. Sometimes, the iSCSI-vs. [ Also on InfoWorld.com: Download Logan Harbaugh's Archiving Deep Dive and get the fundamentals of regulatory compliance. | Learn how data deduplication can slow the explosive growth of data with Keith Schultz's Deep Dive Report. ] Now that we're about a year down the pike after the ratification of the FCoE (FC over Ethernet) standard, things aren't much better. 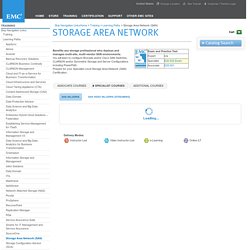 Hybrid-Flash Storage. Pure Storage 250 TB All-Flash Array Takes On Disks. All-flash array upstart Pure Storage is revving up its machines to take on bigger storage jobs as well as pushing down into smaller sites with its fourth generation of products. 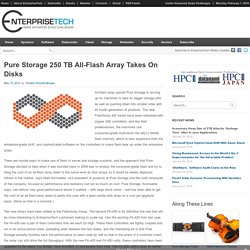 The new FlashArray 400 series have been refreshed with zippier X86 controllers, and like their predecessors, the machines use consumer-grade multi-level cell (MLC) NAND flash memory, which is less expensive than the enterprise-grade stuff, and sophisticated software on the controllers to make flash bear up under the enterprise strain. There are myriad ways to make use of flash in server and storage systems, and the approach that Pure Storage decided to take when it was founded back in 2009 was to employ the consumer-grade flash and try to bring the cost of an all-flash array down to the same level as disk arrays so it would be widely deployed.

Two new arrays have been added to the FlashArray lineup. In the “vanity benchmark zone,” as Kixmoeller puts it, other flash arrays do show better performance. Share this: Storage Array, All Flash Arrays, Flash Storage Arrays. Pure Storage FlashArray 405 & 450 - Tom's IT Pro. The FlashArray 400 Series is Pure's third generation all-flash storage solution, making its debut in May 2013 with the release of the FA-420 model. 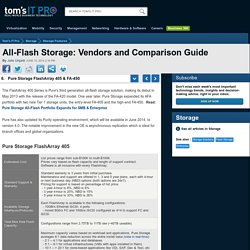 One year later, Pure Storage expanded its AFA portfolio with two new Tier 1 storage units, the entry-level FA-405 and the high-end FA-450. Read: Pure Storage All-Flash Portfolio Expands for SMB & Enterprise Pure has also updated its Purity operating environment, which will be available in June 2014, to version 4.0. The notable improvement in the new OE is asynchronous replication which is ideal for branch offices and global organizations. Pure Storage Reveals FlashArray//m Architecture Details.