On Finding Your Purpose: An Extraordinary Letter by Hunter S. Thompson. In April of 1958, a 22 year-old Hunter S. 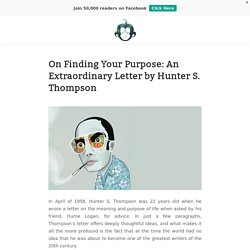 Thompson wrote a letter on the meaning of life when asked by a friend for advice. What makes his response all the more profound is the fact that at the time, the world had no idea that he would become one of the most important writers of the 20th century. Therefore his beliefs about purpose were hypothetical—they were statements of faith.

But if it’s true that our beliefs really do become our reality, then there’s no better example of a life fully realised than the one of Hunter S. Thompson. “I was not proud of what I had learned, but I never doubted that it was worth knowing.” – Hunter S. April 22, 1958 57 Perry Street New York City. Theomagica - Overview. An exploration among multiple cultures The Holy Guardian Angel (HGA) has become the most commonly referred to spiritual concept in Western Magic. 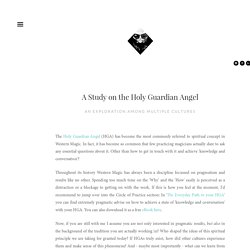 In fact, it has become so common that few practicing magicians actually dare to ask any essential questions about it. Other than how to get in touch with it and achieve 'knowledge and conversation'? Throughout its history Western Magic has always been a discipline focussed on pragmatism and results like no other. Spending too much time on the 'Why' and the 'How' easily is perceived as a distraction or a blockage to getting on with the work. * ALAN MOORE WORLD *: Moore & Coulthart and... the lost Crowley. Surprised by the discover, I contacted Coulthart to know more about it. 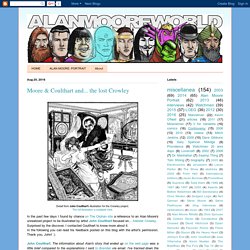 In the following you can read his feedback posted on this blog with the artist's permission. Thank you, John! Imaginos. Imaginos is the eleventh studio album by the American hard rock band Blue Öyster Cult (commonly shortened as BÖC). 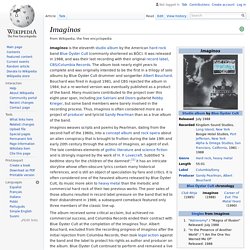 It was released in 1988, and was their last recording with their original record label, CBS/Columbia Records. The album took nearly eight years to complete and was originally intended to be the first in a trilogy of solo albums by Blue Öyster Cult drummer and songwriter Albert Bouchard. Sandy Pearlman, Blue Oyster Cult, Clash Producer, Dead at 72 - Rolling Stone. Sandy Pearlman, a record executive, songwriter, manager, poet and producer for acts like Blue Öyster Cult and the Clash, has died, according to a Facebook post from friend Robert Duncan. 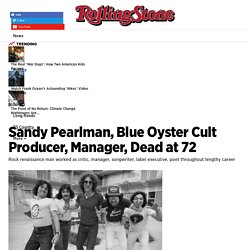 He was 72. Duncan wrote that Pearlman "passed peacefully surrounded by love" Tuesday morning, and that a celebration of his life would be announced in the coming days. In June, Duncan created a GoFundMe page to help cover Pearlman's medical costs after the producer suffered a cerebral hemorrhage that left him unable to walk, talk or fully comprehend his surroundings. On the GoFundMe page, Duncan praised Pearlman's extensive contributions to music, writing, "He is a pioneer of rock criticism, at Crawdaddy and other seminal publications, a pioneer of heavy metal (a phrase he may have been the first to use, as a rock critic), a pioneer of punk, paisley underground and goth. " Dark Journalist: The Truth Is Never Easy. Theomagica - The Everyday Path to your Holy Guardian Angel - eBook. Reagan’s Rules for Military Action.

They are Reagan’s Rules. 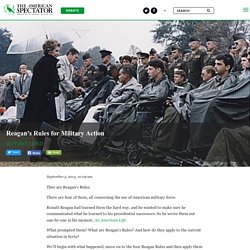 There are four of them, all concerning the use of American military force. Ronald Reagan had learned them the hard way, and he wanted to make sure he communicated what he learned to his presidential successors. So he wrote them out one-by-one in his memoir, An American Life. The Secret Sun: Mindbomb: Things That Should Not Be Known. The "Moon as Alien Base" meme might not be the most popular meme out there, but it's one of the most persistent. 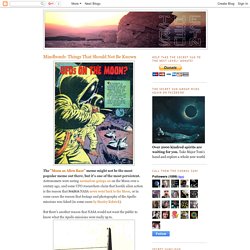 Astronomers were seeing anomalous goings-on on the Moon over a century ago, and some UFO researchers claim that hostile alien action is the reason that NAZCA NASA never went back to the Moon, or in some cases the reason that footage and photography of the Apollo missions was faked (in some cases by Stanley Kubrick). But there's another reason that NASA would not want the public to know what the Apollo missions were really up to.

Richard Hoagland has written and spoken extensively on his beliefs that NASA is covering up the Moon missions to hide alien artifacts found by the Apollo crews. While his theories are well known through his appearances on Coast 2 Coast and other programs, less known-- and even more interesting -- is the fact that two unmanned moon missions indeed discovered enormous obelisks on the Moon's surface, arranged in a geometric design. OK, so what? The Secret Sun: AstroGnostic: Heaven's Gate's Final Secret? UPDATE: Click here for a bizarre and frightening synchronicity attached to this story.It's a continuing source of amazement how many of the themes I followed on the blog over the years have re-entered the newsstream since I began blogging again, especially so in the past month. 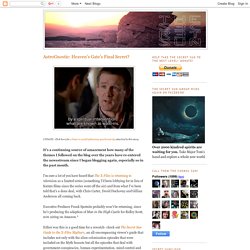 I'm sure a lot of you have heard that The X-Files is returning to television as a limited series (something I'd been lobbying for in lieu of feature films since the series went off the air) and from what I've been told that's a done deal, with Chris Carter, David Duchovny and Gillian Anderson all coming back. Executive Producer Frank Spotnitz probably won't be returning, since he's producing the adaption of Man in the High Castle for Ridley Scott, now airing on Amazon. Just don't expect anything that goes against the usual media narrative on the cult.

In other words, Applewhite was preaching good, old fashioned Manichaeism. A first year divinity student could tell you that. This is Gnosticism 101: Twilight Language: The Adam Walsh Effect: 2016. The summer of 2016 must cause us to revisit the Adam Walsh Effect. 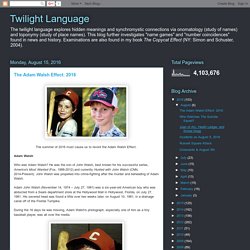 Adam Walsh Who was Adam Walsh? He was the son of John Walsh, best known for his successful series, America's Most Wanted (Fox, 1988-2012) and currently Hunted with John Walsh (CNN, 2014-Present). The House Where You Live Forever : Longreads Blog. Photo courtesy of Alan Prohm. 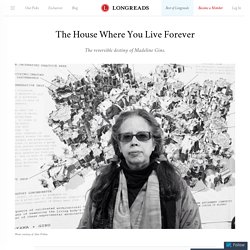 Amelia Schonbek | Longreads and The Awl | August 2016 | 28 minutes (7,065 words) This story was co-published with The Awl and funded by Longreads Members. On a bright afternoon in October 2013, Madeline Gins walked into the office of her architecture practice, in an unrestored loft building on the edge of SoHo, slightly out of breath. Before she arrived, the space—a large open room occupying the fourth floor of the building—had been so still that it was almost possible to forget about the two architects staring into computer screens near the back windows. Gins entered, and the atmosphere began to buzz. “Is Joke here?” Astrology 8/15-8/21: Ties That Bind. The Stargate Conundrum. The Stargate Conundrum The US Government’s secret pursuit of the psychic drug “There are two ways to be fooled.

One is to believe what isn’t true; the other is to refuse to believe what is true.” Søren Kierkegaard (1813-1855) Introduction. The week democracy died: How Brexit, Nice, Turkey, and Trump are all connected. Animation by Slate. Photos by Getty Images, Reuters. There are years, decades even, in which history slows to a crawl. Then there are weeks that are so eventful that they seem to mark the dissolution of a world order that had once seemed solid and to foretell the rise of one as yet unknowable. The week of July 11, 2016, has every chance of being remembered as one of those rare flurries of jumbled, inchoate, concentrated significance. The centrifugal forces that are threatening to break political systems across the world may have started to register a decade ago; they may have picked up speed over the last 12 months; but never since the fall of the Berlin Wall have they wreaked havoc in so many places in so short a span of time—showcasing the failures of technocratic rule, the terrifying rise of populist strongmen, and the existential threat posed by Islamist terrorism, all in the span of seven short days.

The Trolley Problem Meme: What Do You Do? A scenario: A runaway trolley car is careening down a track. Five people stand in its path, unaware of the imminent threat. You stand at the intersection of two different tracks and could, if you chose to, divert the trolley onto another track where only one person would be killed. Propublica. Sometime during the past few years, the country started talking differently about white Americans of modest means.

Early in the Obama era, the ennobling language of campaign pundits prevailed. There was much discussion of “white working-class voters,” with whom the Democrats, and especially Barack Obama, were having such trouble connecting. Never mind that this overbroad category of Americans — the exit pollsters’ definition was anyone without a four-year college degree, or more than a third of the electorate — obliterated major differences in geography, ethnicity, and culture. The label served to conjure a vast swath of salt-of-the-earth citizens living and working in the wide-open spaces between the coasts — Sarah Palin’s “real America” — who were dubious of the effete, hifalutin types increasingly dominating the party that had once purported to represent the common man. The “white working class” connoted virtue and integrity.

That flattering glow has faded away. Every Number Tells a Story. “We depend on numbers to make sense of the world, and have done so ever since we started to count.” — Alex Bellos The earliest symbols used for numbers go back to about 5000 years ago Sumer (modern day Iraq). They didn’t really look far for names. Ges, the word for one, also meant man. Joanne The Scammer Lives For Drama. Branden Miller Is Just Trying To Live.

Branden grew up in Hopewell, a small city in Virginia. He was adopted as a baby by an older white couple: Buddy, who died of cancer when Branden was 12, and Veronica, a stay-at-home mom. Branden didn’t learn he was adopted until age 17, when a family friend broke the news. He doesn’t know much about his biological parents, except that they were black and Puerto Rican. “I read my adoption papers when I found out,” he says. 15 Years After 9/11, Is America Any Safer? Lee Harvey Oswald Proved Innocent: He Worked for RFK & Saved JFK from Assassination in Chicago. Framed by the CIA Because He Infiltrated Their Assassination Conspiracy Oswald Worked Directly For...

Framed by the CIA Because He Infiltrated Their Assassination Conspiracy Oswald Worked Directly For Robert F. Kennedy Who Authorized His Return From The USSR To Conduct Domestic ‘Counterintelligence’ Synarchy: The Hidden Hand Behind the European Union. El Chapo and the Secret History of the Heroin Crisis. 6 Billion People Do Not Meet Vitamin E Levels Necessary for Cognitive and Cardiovascular Health. People who don't get enough vitamin E in their diets appear to be more likely than others to sho...

Secrets of the Subterranean Cities. By Sharula Dux from SoulWise Website Atlantean-Lemurian Wars. Ganzfeld effect. Paranormalia: Bengston's Energy Healing - Too Good to be True? William Bengston's The Energy Cure came out at the end of last year, but I only just got around to it. I have an excuse I suppose, as my own book was coming out at the same time. But it's so extraordinary, I can't understand how I could have missed it.