The Myth of Synchronized Breathing. In the game of Mindball, two players compete to push a ball whose motions are dictated by their brain waves, as measured by electrodes on their scalps. 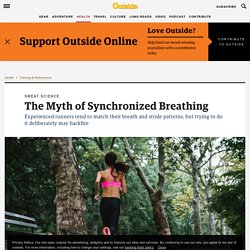 The harder you try, the weaker the force you exert on the ball. This (as the author and philosopher Edward Slingerland noted in his 2014 book Trying Not to Try) is a modern incarnation of the ancient Chinese paradox of wu wei, or effortless action. And it’s strangely reminiscent of the challenges we encounter in pursuit of running well. That’s what popped to mind when I read a new paper in the European Journal of Applied Physiology, from Appalachian State University researcher Abigail Stickford and her colleagues, about synchronization between breathing and stride rate while running. More recently, evidence has suggested that experienced runners are more likely to lock into a synchronized pattern—what scientists called entrainment or (equivalently) locomotor-respiratory coupling—than novices. Contribute to Outside→ Thank you! Breathe In! Nasal Inhalations Are Linked to Laser-Like Focus.

Taking a deep breath in through the nose appears to help the human brain create a laser-like focus on visuospatial tasks, according to a new study by a team of researchers at the Weizmann Institute of Science in Israel. 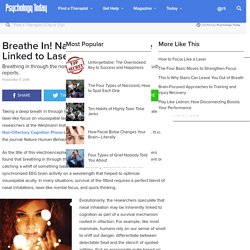 This paper, “Human Non-Olfactory Cognition Phase-Locked with Inhalation,” was published March 11 in the journal Nature Human Behaviour. As the title of this electroencephalography-based study suggests, the researchers found that breathing in through the nose—without the intention of sniffing a scent or catching a whiff of something based on the olfactory-based sense of smell—synchronized EEG brain activity on a wavelength that helped to optimize visuospatial acuity. In many situations, survival of the fittest requires a perfect blend of nasal inhalations, laser-like mental focus, and quick thinking. article continues after advertisement Source: Matheus Bertelli/Pexels Nasal Inhalations Help an Athlete's Brain Have a Better Eye for the Ball. Proper Breathing Brings Better Health. As newborns, we enter the world by inhaling. 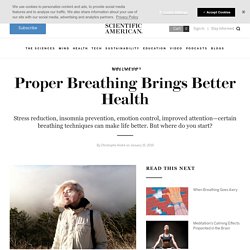 In leaving, we exhale. (In fact, in many languages the word “exhale” is synonymous with “dying.”) Breathing is so central to life that it is no wonder humankind long ago noted its value not only to survival but to the functioning of the body and mind and began controlling it to improve well-being. As early as the first millennium B.C., both the Tao religion of China and Hinduism placed importance on a “vital principle” that flows through the body, a kind of energy or internal breath, and viewed respiration as one of its manifestations. The Chinese call this energy qi, and Hindus call it prana (one of the key concepts of yoga). A little later, in the West, the Greek term pneuma and the Hebrew term rûah referred both to the breath and to the divine presence.

The Art of Conscious Breathing [Stig Severinsen] Your Breath is Your Brain’s Remote Control. We have all heard this simple saying during times of trouble: “Take a deep breath in.” 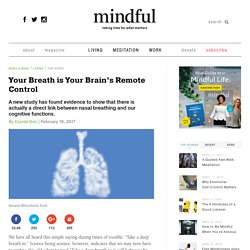 Science being science, however, indicates that we may now have to update this old adage to read “Take a deep breath in it will help you be more emotionally aware but only if you inhale specifically through your nostrils and not your mouth—good luck.” While this may seem a lengthy tip to recall in the midst of uh-oh moments, the power of active breathing—voluntarily inhaling and exhaling to control our breathing rhythm—has been known and used throughout history. Even today, in tactical situations by soldiers, or in extreme cold conditions by the Ice Man, we know that slow, deep breathing can calm the nervous system by reducing our heart rate and activating the parasympathetic (calming) nervous system.

In this way, our bodies become calm, and our minds also quieten. We have all heard this simple saying during times of trouble: “Take a deep breath in.”