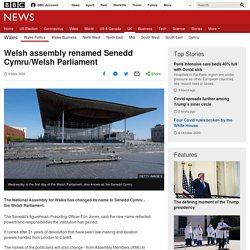 The Senedd's figurehead, Presiding Officer Elin Jones, said the new name reflected powers and responsibilities the institution has gained. It comes after 21 years of devolution that have seen law-making and taxation powers handed from London to Cardiff. Scottish and Welsh governments set out Brexit bill amendments. Image copyright PA The Scottish and Welsh governments have published proposals for changing the legislation that will take the UK out of the EU. 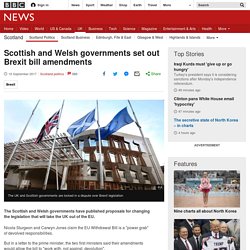 Nicola Sturgeon and Carwyn Jones claim the EU Withdrawal Bill is a "power grab" of devolved responsibilities. But in a letter to the prime minister, the two first ministers said their amendments would allow the bill to "work with, not against, devolution". UK ministers deny that they are planning a power grab. And they insist that the devolved parliaments will be enhanced, rather than diminished, by Brexit. The UK government and the devolved administrations are locked in a dispute over what should happen to powers in areas such are fishing and farming which are not currently reserved to Westminster, but which are currently exercised in Brussels. 'Substantial' amendments They added that they "stand ready to work in a cooperative and coordinated way with others to prepare for Brexit", but said the UK government's approach was preventing this.

How Welsh devolution has evolved over two decades. From an assembly with very limited powers, and a debating chamber once described as resembling a restaurant on a cross-channel ferry, to plans to call itself a Welsh Parliament - how devolution in Wales has developed from a decidedly wobbly start. 1 May 1997: Tony Blair's Labour government sweeps to power in a landslide general election victory with a manifesto commitment to devolve power to Wales and Scotland subject to public approval in referendums. 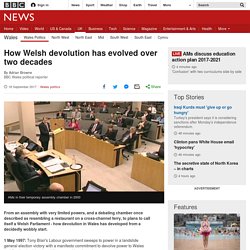 July 1997: The "New Labour" administration announces its Welsh devolution plans in a White Paper - A Voice for Wales. A 60-member assembly would take over responsibility for a £7bn budget from the UK Cabinet's Welsh secretary. With more limited legal powers than the proposed Scottish Parliament, it would pass secondary legislation amending certain existing laws. 18 September 1997: In a referendum voters are asked to decide whether "I agree there should be a Welsh Assembly" or "I do not agree there should be a Welsh Assembly". 10 years of failure or decade to remember for devolution?

A decade ago today the National Assembly began its first session. 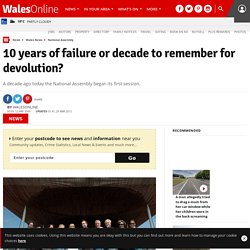 SEÁN SMITH asked 10 ordinary people in Cardiff Bay about what they see as the best and worst things the Assembly has been responsible for in its first 10 years… Nerys Bennett, 28, from Grangetown, Cardiff. Best thing: Devolution gives Wales a greater sense of independence and its own identity. Worst thing: She wished the Assembly was “more able to connect with ordinary people and have a greater impact on their lives”. Clare Decey, 30, of Fairwater, Cardiff. Best thing: The introduction of free prescriptions in Wales, the greatest measure of the past decade. Worst thing: That devolution in Wales had not gone far enough. Laura Bowden, 22, Cathays, Cardiff. How do you feel 20 years since Wales voted for devolution? Wales voted for a devolved government 20 years ago this week after the publication of a white paper entitled A Voice for Wales, one of the first actions of Tony Blair’s Labour government. 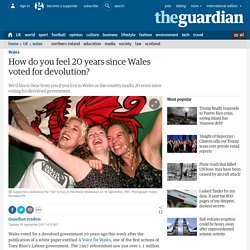 The 1997 referendum saw just over 1.1 million votes cast, a margin of just 6,721 deciding it. In an interview with the Guardian to mark the anniversary, the first minister, Carwyn Jones, said he believed Wales was now more successful and confident than two decades ago. Warning that a hard Brexit would challenge devolution as well as the union, Jones said: “As someone who wants the UK to stay together, I don’t want daft decisions such as the current [Brexit] bill to cause the UK to begin to unravel. I’m a devolutionist who believes in the union. I don’t think they get that in Whitehall.” Devolution in Wales is here to stay – Brexit must not change that. For many, it seems that a margin of victory of 52 to 48 is less than compelling. 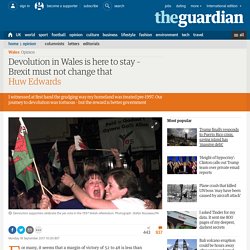 In Wales, it is splendidly ironic that some of those questioning the validity of the 2016 referendum result are the same people who rejected any such questioning in 1997 when Wales voted for devolved government by 50.3 to 49.7 – a margin so narrow that the verdict could not be confirmed until the very last vote had been counted. There have been four cardinal events in Welsh politics since the second world war. This week Wales is marking, celebrating or bewailing (take your pick) the most recent of them, the poll held in accordance with the Referendums (Scotland and Wales) Act 1997. This was one of the first pieces of legislation passed by the Labour administration of Tony Blair. But it is difficult to understand the peculiar circumstances of 1997 without appreciating what went before. A guide to devolution in the UK.

Image copyright AFP/Getty Images There have long been important distinctions in the way different parts of the UK work - for example, the separate education and legal systems in Scotland. 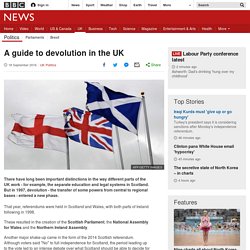 But in 1997, devolution - the transfer of some powers from central to regional bases - entered a new phase. That year, referendums were held in Scotland and Wales, with both parts of Ireland following in 1998.