Magnetism generated in non-magnetic metals. By subtly altering certain quantum interactions in matter, scientists from the University of Leeds have shown for the very first time how to generate magnetism in metals that aren’t normally magnetic. 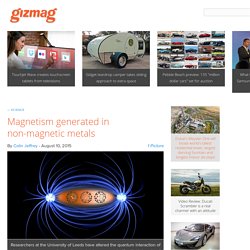 Synthetic magnets made using this technique may one day reduce our reliance on rare or toxic metals in such things as wind turbines, computer hard drives and magnetic field medical imaging devices. "Being able to generate magnetism in materials that are not naturally magnetic opens new paths to devices that use abundant and hazardless elements, such as carbon and copper," says postgraduate student Fatma Al Ma’Mari, from the School of Physics & Astronomy at the University of Leeds.

Ordinarily, there exist only three metals that are ferromagnetic – that is, able to be made magnetic in the presence of a magnetic field and remaining that way after the field is removed – at room temperature, these being iron, cobalt, and nickel. Walking Bicycle Club. Raht Racer velomobile may let riders pedal "as fast as a car" Pedalist velomobile hits Kickstarter. Last September, we spied a prototype of Virtue Cycles' Pedalist electric-assist velomobile at Interbike in Las Vegas. 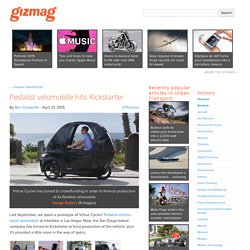 Now, the San Diego-based company has turned to Kickstarter to fund production of the vehicle, plus it's provided a little more in the way of specs. As mentioned in our previous coverage, the Pedalist is essentially a tadpole-style trike (two wheels in the front) with a full lighting system and a polycarbonate body that provides protection from the elements along with a reduction in wind drag. It also has an electric motor, to help propel its target weight of 150 to 200 lb (68 to 91 kg). GinzVelo makes for gonzo transportation. Electric bikes may help you climb hills, fight headwinds and arrive at work in a non-sweaty state, but they still won't keep you dry when it rains. 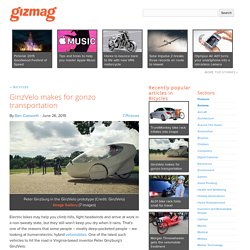 That's one of the reasons that some people – mostly deep-pocketed people – are looking at human/electric hybrid velomobiles. One of the latest such vehicles to hit the road is Virginia-based inventor Peter Ginzburg's GinzVelo. The GinzVelo takes the form of a recumbent tricycle surrounded by a sleek fiberglass/foam core body shell, which is the basic design used by most velomobiles. The shell aids in aerodynamics, shields the rider from the elements, and may also offer a degree of crash protection. It additionally makes the thing look pretty darn cool. Morgan Threewheeler gets the velomobile treatment. The Morgan Threewheeler is definitely a unique vehicle, although with prices starting just shy of £30,000 (about US$47,000) ... well, it ain't cheap. 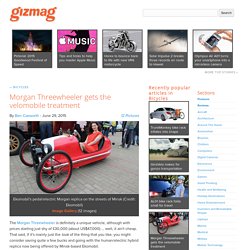 That said, if it's mainly just the look of the thing that you like, you might consider saving quite a few bucks and going with the human/electric hybrid replica now being offered by Minsk-based Ekomobil. According to Ekomobil, the design of its vehicle is based on technical drawings of the original gas-powered Morgan Threewheeler. It has a lacquered composite body shell and 24-inch wheels on the outside, combined with wood veneer and leather trim on the interior. 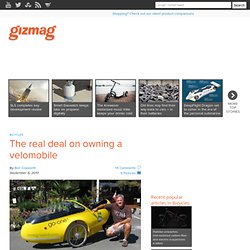 It was about a vehicle called the Cyclodyne, which was a recumbent human-powered tricycle enclosed in a full polyester-and-epoxy streamlined shell. The writer claimed that he had easily got the thing up to 30 mph (48 km/h), and that it was designed to reach 53 mph (85 km/h) on flat ground. Good Lord, how I wanted one. Its US$3,800 price tag ensured that it would never happen, but that didn’t stop me from obsessing. That article was my introduction to the world of velomobiles, which can pretty much be defined as aerodynamically-shelled recumbent tricycles. View all Hugo Ciro lives in Victoria, British Columbia, where he runs a fair trade coffee importing business. When Ciro’s vehicle arrived in Canada, he discovered that the seat was designed for someone considerably taller than him, and had to replace it with a seat he made himself. 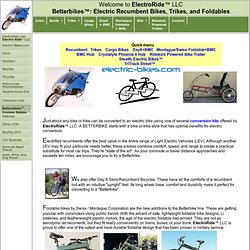 A BETTERBIKE starts with a bike or trike style that has optimal benefits for electric conversion.Electrified recumbents offer the best value in the entire range of Light Electric Vehicles (LEV). Although another LEV may fit your particular needs better, these e-bikes combine comfort, speed, and range to create a practical substitute for most car trips. They're "state of the art". As your commute or travel distance approaches and exceeds ten miles, we encourage you to try a Betterbike.Foldable bikes by Swiss / Montague Corporation are the new additions to the Betterbike line. 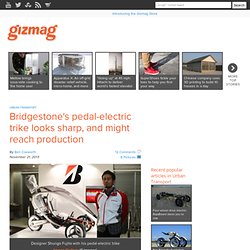 The fact is, though, the company also makes bicycles, golf equipment, and has tried its hand at motorcycles. Bridgestone designer Shungo Fujita decided to combine all three things in one stunning concept vehicle – a pedal-electric trike that can carry a set of golf clubs. View all We spied the trike at the Tokyo Motor Show, where Fujita informed us that Bridgestone likes his concept so much, plans are in place to manufacture the vehicles as a means of transport for the athletes at Tokyo's 2020 Olympic village. Does this mean a commercial production run could also be in the works? Shungo was reluctant to discuss the trike's specs, although after some gentle prodding he told us that its electric assist motor is rated at 600 watts, giving the vehicle a top motor-assisted speed of 30 km/h (19 mph). About the Author. Johanson3 electric cargo trike keeps the rider standing, and tilts into turns - Images.

Now you can buy your own Antarctica-worthy fat trike. The ICE Full Fat is all set for your next 'big expedition' Image Gallery (12 images) Last December, British adventurer Maria Leijerstam became the first person to cycle from the edge of the Antarctic continent to the South Pole. 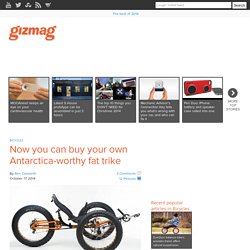 Organic Transit. ELF velomobile is powered by you and the Sun. While it’s all very well and good to use an electric vehicle as your around-town ride, full-size electric cars can still be pretty pricey. 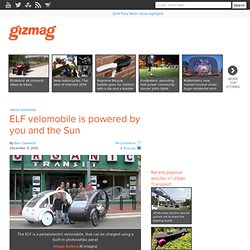 Also, as many of their critics are quick to point out, the electricity used to charge their batteries currently still tends to come from eco-unfriendly sources such as coal-burning power plants. Well, that’s where the three-wheeled ELF velomobile comes into play. It’s cheaper than a car, can be pedaled like a tricycle, and the battery that powers its electric assist motor can be charged from the Sun. View all Prototypes of the ELF are presently being built by Organic Transit, a Durham, North Carolina-based company founded by entrepreneur Rob Cotter. The Mechanical Engineering Project. The HOY! Pinoy Mini Car Side by Side Size Comparison with Tricycle 1 of 3. Honda tmx 155, loaded sound set up. "The Flying Eye Hospital, Trike and Tested, Guyabano and Immersions!" 2. Prozza E-trike "Pecolo" and Battery Exchange Station. Boxer manufacturing the finest trikes. Trivek leaning trike lets riders sit back and sit tall - Images. In the Philippines, E-trikes Are Driving Change.