Transport and Travel. About Words - Cambridge Dictionaries Online blog. By Liz Walter​ As part of an occasional series on the tricky subject of phrasal verbs, this blog looks at ones formed with the verb ‘come’. 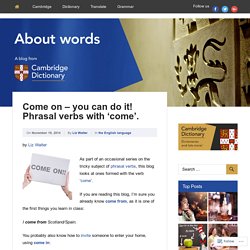 If you are reading this blog, I’m sure you already know come from, as it is one of the first things you learn in class: I come from Scotland/Spain. You probably also know how to invite someone to enter your home, using come in: How lovely to see you! Just like these two common phrasal verbs, many others use ‘come’ more or less with its usual meaning of moving or travelling towards someone or something. He’s not here at the moment. Would you like to come round for lunch tomorrow? All her family are coming over from Australia.

And here’s another great thing about phrasal verbs with come: none of them can be separated, so you don’t need to worry about that at all! However, there are some phrasal verbs with ‘come’ that are harder because the meaning is impossible to guess. Tell me if you come across Max anywhere. I came across a lovely little restaurant. Related. About Words - Cambridge Dictionaries Online blog. Clipped wing generation noun the generation of young adults who are unable to be independent from their parents because they cannot afford independent living costs William Wragg, aged 28, is among tens of thousands of Britons who have joined the ‘clipped wing generation’ of graduates, despite earning £74,000 plus expenses as a Member of Parliament. [ 10 February 2016] genervacation noun a holiday taken by parents and their grown-up children which is paid for by the parents While the rise of what travel firms are calling the ‘genervacation’ has been building for some time, it has received a turbo boost from pension reforms and soaring property prices. [ 20 February 2016] A large number of parents were caught up with guilt because their children can’t afford the holidays that they can, Mr Williams said. 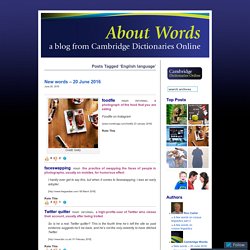 [www.dailymail.co.uk 21 February 2016] adultism noun discrimination against young people [The Economist (UK current affairs magazine) 02 January 2016] [ 28 March 2016] In London but at the station: prepositions for talking about travel. By Liz Walter​ Several readers have asked for information on prepositions, so I will start with a blog post that looks at an area where they are really important: travel. 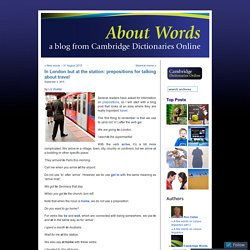 The first thing to remember is that we use to (and not ‘in’) after the verb go: We are going to London. I went to the supermarket. With the verb arrive, it’s a bit more complicated. They arrived in Paris this morning. Call me when you arrive at the airport. Do not use ‘to’ after ‘arrive’. We got to Germany that day. When you get to the church, turn left. Note that when the noun is home, we do not use a preposition: Do you want to go home? For verbs like be and wait, which are connected with being somewhere, we use in and at in the same way as for ‘arrive’: I spent a month in Australia. Wait for me at the station. About Words - Cambridge Dictionaries Online blog. By Colin McIntosh​ Footballers have a lot to answer for when it comes to men’s hairstyles. 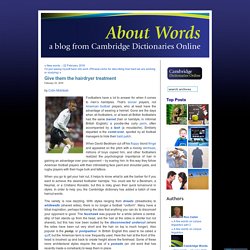 That’s soccer players, not American football players, who at least have the advantage of wearing a helmet. Gone are the days when all footballers, or at least all British footballers had the same barnet (hair or hairstyle, in informal British English): a poodle-like curly perm, often accompanied by a tash (a moustache).

Similarly departed is the comb-over, sported by all football managers to hide their bald patch. When David Beckham cut off his floppy blond fringe and appeared on the pitch with a moody skinhead, millions of boys copied him, and other footballers realized the psychological importance of hair in gaining an advantage over your opponent – by scaring him. When you go to get your hair cut, it helps to know what to ask the barber for if you want to achieve the desired footballer hairstyle. The variety is now dazzling.

Bethany Shriever on how she got into BMX racing - CBBC Newsround. Driven. Agree with and wait for: common mistakes with verbs and their prepositions. By Liz Walter​ Several readers have asked for more help with prepositions, so this post concentrates on prepositions you need to use with verbs. 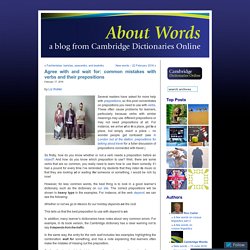 These often cause problems for learners, particularly because verbs with similar meanings may use different prepositions or may not need prepositions at all. For instance, we arrive at or in a place, get to a place, but simply reach a place – no wonder people get confused! (see In London but at the station: prepositions for talking about travel for a fuller discussion of prepositions connected with travel.) So firstly, how do you know whether or not a verb needs a preposition before an object?

However, for less common words, the best thing is to look in a good learner’s dictionary, such as the dictionary on our site. Whether or not we go to Mexico for our holiday depends on the cost. This tells us that the best preposition to use with depend is on. In addition, many learner’s dictionaries have notes about very common errors.