'The Metaverse Primer' — MatthewBall.vc. Different Data Valuation Methodologies. Value is in the eye of the beholder. 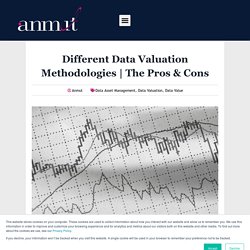 The stakeholder value approach goes right to the source of value, by measuring the economic value created for each stakeholder. Valuing high-tech companies. For the past several years, investors have once again been piling into shares of companies with fast growth and high uncertainty—especially Internet and related technologies. 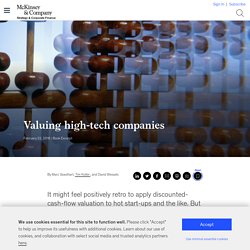 The rapid rise and sudden collapse of many such stocks at the end of the 20th century raised questions about the sanity of a stock market that appeared to assign higher value to companies the more their losses mounted. Now, amid signs that the current tech boom is wobbling, even the US Securities and Exchange Commission is getting into the act, announcing in late 2015 its plans to investigate how mutual funds arrive at widely varying valuations of privately held high-tech companies. In the search for precise valuations critical to investors, we find that some well-established principles work just fine, even for high-growth companies like tech start-ups. Start from the future Originating in San Francisco, the company now serves around 150 cities around the world. Understanding how a start-up makes money is critical. TechCrunch is now a part of Verizon Media. TechCrunch is part of Verizon Media. 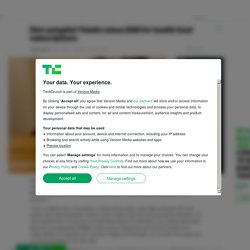 By clicking "Accept all" you agree that Verizon Media and our partners will store and/or access information on your device through the use of cookies and similar technologies and process your personal data, to display personalised ads and content, for ad and content measurement, audience insights and product development. Your personal data that may be used Information about your account, device and internet connection, including your IP address Browsing and search activity while using Verizon Media websites and apps Precise location You can select 'Manage settings' for more information and to manage your choices. 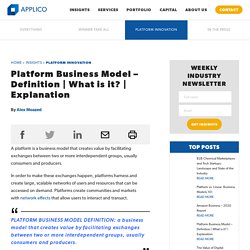 In order to make these exchanges happen, platforms harness and create large, scalable networks of users and resources that can be accessed on demand. Platforms create communities and markets with network effects that allow users to interact and transact. PLATFORM BUSINESS MODEL DEFINITION: a business model that creates value by facilitating exchanges between two or more interdependent groups, usually consumers and producers. Like Facebook, Uber, or Alibaba, these businesses don’t directly create and control inventory via a supply chain the way linear businesses do. Platform businesses don’t, to use a common phrase, own the means of production— instead, they create the means of connection.

Successful platforms facilitate exchanges by reducing transaction costs and/or by enabling externalized innovation. What a Platform is Not. Amazon, Google and why you can't just invent a blockbusting games developer. It was perhaps not the most surprising video game industry revelation of all time. 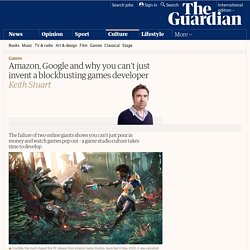 Last week, Bloomberg published an eviscerating exposé on the dysfunctional culture at Amazon Game Studios, the development teams formed by the online retail giant, which have so far failed to produce a single hit title for PC or consoles, despite recruiting a wealth of industry veterans. Agile marketing: A step-by-step guide. An international bank recently decided it wanted to see how customers would respond to a new email offer. 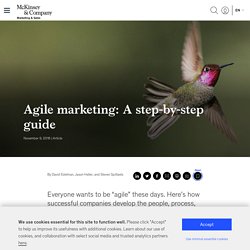 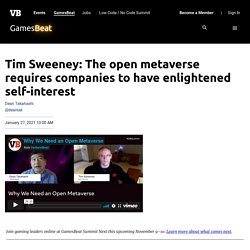 Learn more about what comes next. Twenty years ago, at the dawn of the Xbox era, Epic Games CEO Tim Sweeney convinced Bill Gates to spend a billion dollars on more memory chips for the Xbox. He faced a lot of pressure, but Tim didn’t back down. After all, it was Bill Gates’ money. And it was the right thing to do for gamers. Fast forward to today. The platform play: How to operate like a tech company. “The question is not how fast tech companies will become car companies, but how fast we will become a tech company.” 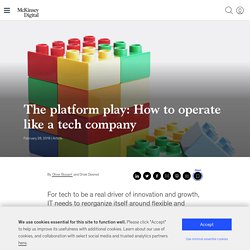 This is how the board member of a global car company recently articulated the central issue facing most incumbents today: how to operate and innovate like a tech company. The tech giants of today have been some of the most innovative companies in the past generation. Evolution of the Platform Organization: 3 Haier, Rendanheyi, and Zhang Ruimin’s Vision. Haier’s Chairman, Zhang Ruimin, is one of the world’s most well-known management thinkers, at least in the rarefied world of business strategy and management. 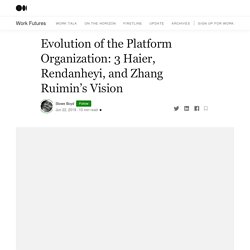 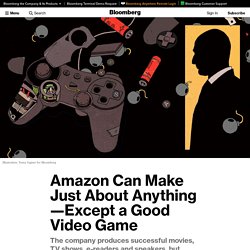 Eight years later, he has released two duds, withdrew both from stores after a torrent of negative reactions and canceled many more. For a company that dominates countless areas of retail, consumer electronics and enterprise computing, the multiple failures in gaming show one realm that may be impervious to Amazon.com Inc.’s distinctive business philosophy. It tried to make games the Amazon way, instead of simply making games people would want to play. Sign in to your account. The platform play: How to operate like a tech company. The Role of Marketing in Digital Business Platforms. Afuah, 2013 A. AfuahAre network effects really all about size? The role of structure and conduct Strategic Management Journal, 34 (3) (2013), pp. 257-273.