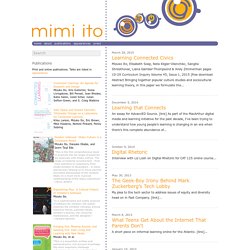 December 5, 2014 Learning that Connects An essay for AdvancED Source. October 9, 2014 Digital Rhetoric Interview with Liz Losh on Digital Rhetoric for CAT 125 online course... May 30, 2013 The Geek-Boy Irony Behind Mark Zuckerberg’s Tech Lobby My plea to the tech sector to address issues of equity and diversity head on in Fast Company. March 8, 2013 What Teens Get About the Internet That Parents Don't A short piece on informal learning online for the Atlantic. 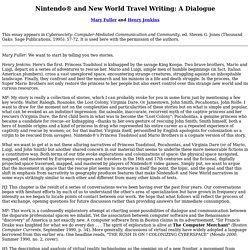 Steven G. Jones (Thousand Oaks: Sage Publications, 1995): 57-72. It is used here with the permission of the authors. Mary Fuller: We want to start by telling you two stories. Henry Jenkins: Here's the first. Game Research - The art, business, and science of video games » Civilization and Its Discontents: Simulation, Subjectivity, and Space. Date posted: May 18, 2006Updated: Oct 24, 2006 by Ted Friedman Introduction: New Paradigms, Old Lessons There was a great Nintendo commercial a few years back in which a kid on vacation with his Game Boy starts seeing everything as Tetris blocks. 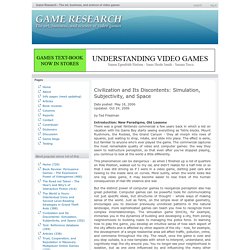 Mount Rushmore, the Rockies, the Grand Canyon - they all morph into rows of squares, just waiting to drop, rotate, and slide into place. The effect is eerie, but familiar to anyone who’s ever played the game. The commercial captures the most remarkable quality of video and computer games: the way they seem to restructure perception, so that even after you’ve stopped playing, you continue to look at the world a little differently. Game Research - The art, business, and science of video games » Making Sense of Software: Computer Games as Interactive Textuality. 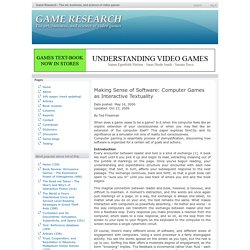 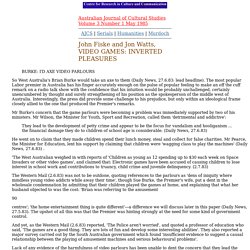 The most popular Labor premier in Australia has his finger accurately enough on the pulse of popular feeling to make an off the cuff remark on a radio talk show with the confidence that his intuition would be probably unchallenged, certainly unencumbered by thought and surely strengthening of his position as the spokesperson of the middle west of Australia. Interestingly, the press did provide some challenge to his prejudice, but only within an ideological frame closely allied to the one that produced the Premier's remarks. Mr Burke's concern that the game parlours were becoming a problem was immediately supported by two of his ministers.

Personal Home Pages and the Construction of Identities on the Web. Introduction It has been contended by media theorists such as Joshua Meyrowitz (1985) that the adoption of new media seems to involve a shifting or blurring of the boundaries of public and private. 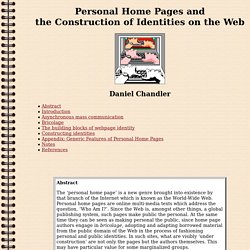 Without adopting the stance of hard technological determinism (Chandler 1995b; 1996), we may perceive such a shift in the new genre of the personal home page on the World-Wide Web. Whilst the fundamental technical difference between the medium of speech and that of writing is that writing is automatically recorded, web pages introduce another key feature: what is written on a web page (and stored on a web-server) is automatically published on a global scale.

Web pages which are ‘personal’ are simultaneously public, and it is such ‘personal home pages’ which are the subject of this paper. Home pages are a medium in which conventional relationships between public and private are visibly in the process of transformation (Kelly 1995). Video Games and Young Players. The earliest home video game was PONG, an electronic table-tennis game which was launched in 1972 by Atari. 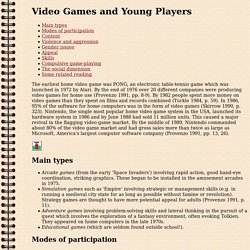 By the end of 1976 over 20 different companies were producing video games for home use (Provenzo 1991, pp. 8-9). By 1982 people spent more money on video games than they spent on films and records combined (Turkle 1984, p. 59). Redefining the Home Screen: Technological Convergence as Trauma and Business Plan. Every electronic media product launch or network debut carries with it an implicit fantasy scenario of its domestic consumption, a polemical ontology of its medium, and an ideological rationale for its social function. 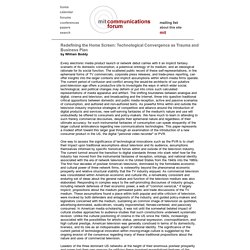 The scattered public record of these self-representations, in the ephemeral forms of TV commercials, corporate press releases, and trade-press reporting, can offer insights into the larger contexts and implicit assumptions within which media firms operate. The current period of confusion and conflict among the would-be architects of our putative post-television age offers a productive site to investigate the ways in which wider social, technological, and political changes may deform or put into crisis such calculated representations of media apparatus and artifact. Leaders of the three dominant US networks at the height of their enormous postwar prosperity and power had their own reasons for ratifying these imagined essentialized features of the medium. 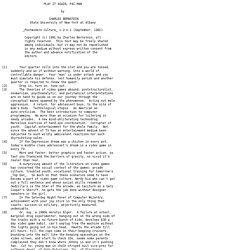 This text may be freely shared among individuals, but it may not be republished in any medium without express written consent from the author and advance notification of the editors. [1] Your quarter rolls into the slot and you are tossed, suddenly and as if without warning, into a world of controllable danger. Your "man" is under attack and you must simulate his defense, lest humanity perish and another quarter is required to renew the quest. [2] Drop in, turn on, tune out. [3] The theories of video games abound: poststructuralist, neomarxian, psychoanalytic, and puritanical interpretations are on hand to guide us on our journey through the conceptual mazes spawned by the phenomenon.

Acting out male aggression. M/C Journal. 1Computer and video games are one of the primary uses of personal computer technologies, and yet despite an increasing interest in cultural practices that are organised around computer and information technologies cultural studies has paid very little attention to this phenomenon. 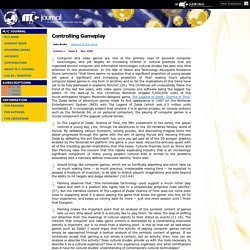 In the War of Desire and Technology Allucquére Roseanne Stone comments "that there seems no question that a significant proportion of young people will spend a significant and increasing proportion of their waking hours playing computer-based games in one form or another, and so far the implications of this trend have yet to be fully addressed in academic forums" (26). This Christmas will undoubtedly follow the trend of the last few years, with video game consoles and software being the biggest toy sellers. The Actor Network Resource, Lancaster University. Science Studies Centre, Department of Sociology, Lancaster University, UK ANT Resource (Home Page) CSS Home Page | ANT Resource Thematic List | ANT Resource Alphabetical List Introduction.

New Media - The Political Economy of Internet Search Engines * Bengü Başbuğ. Free Labor: Producing Culture for the Digital Economy. The real not-capital is labor. -Karl Marx, Grundrisse Working in the digital media industry is not as much fun as it is made out to be. Netscan Home. Democ.htm. CyberDemocracy: Internet and the Public Sphere Mark Poster University of California, Irvine Copyright(c) Mark Poster 1995. Game Studies 0102: Sims, BattleBots, Cellular Automata, God and Go. By Celia Pearce.

A Conversation with Will Wright by Celia Pearce Conducted in Will Wright's office at Maxis, September 5, 2001 CP: What is your philosophy of interactive design? WW: Ooh, a heavy question, a philosophy question. CP: It’s a big question, but I wanted to start you talking about why you design games. What is it about the format of an interactive experience that is so compelling to you? Not 2.0? Tim Bray writes: I just wanted to say how much I’ve come to dislike this “Web 2.0” faux-meme.

It’s not only vacuous marketing hype, it can’t possibly be right. In terms of qualitative changes of everyone’s experience of the Web, the first happened when Google hit its stride and suddenly search was useful for, and used by, everyone every day. The second—syndication and blogging turning the Web from a library into an event stream—is in the middle of happening. What Is Web 2.0. By Tim O'Reilly 09/30/2005 Oct. 2009: Tim O'Reilly and John Battelle answer the question of "What's next for Web 2.0? " From Work to Play. Play Suspended This essay got its start in my keynote remarks for the Digital Arts and Culture Conference in the Spring of 2001 and took its present form during the Summer and Fall of that unforgettable year. CybercultureSoftvideography.pdf. WADs, Bots and Mods: Multiplayer FPS Games as Co-creative Media.

Marshall McLuhan. The Official Site for the Estate of Marshall McLuhan. Lev Manovich - home. Bruno-latour.fr. Table of Contents for Chapter One. Hypertext and Critical Theory. Lisbeth Klastrup: Paradigms of interaction: conceptions and misconceptions of the field today. Henry Jenkins. The Metaphysics of Virtual Reality - Michael Heim. Hayles, "The Power of Simulation" Hayles, "The Power of Simulation" Hayles, "Narratives of Artificial Life"