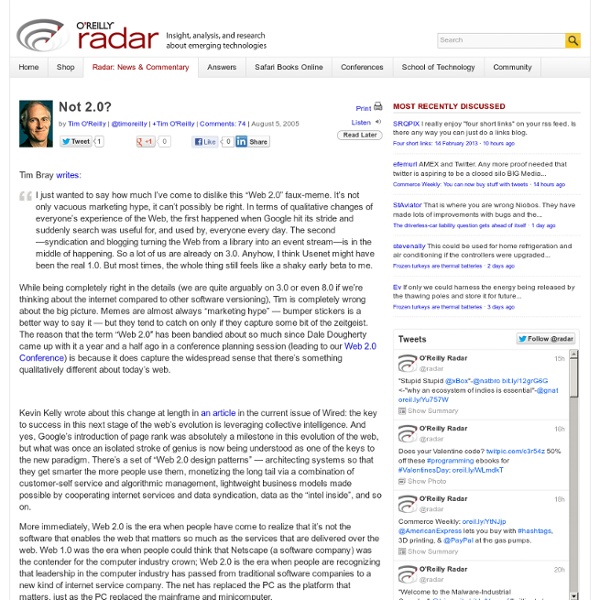 Tim Bray writes: I just wanted to say how much I’ve come to dislike this “Web 2.0” faux-meme. It’s not only vacuous marketing hype, it can’t possibly be right. In terms of qualitative changes of everyone’s experience of the Web, the first happened when Google hit its stride and suddenly search was useful for, and used by, everyone every day. The second—syndication and blogging turning the Web from a library into an event stream—is in the middle of happening. So a lot of us are already on 3.0. While being completely right in the details (we are quite arguably on 3.0 or even 8.0 if we’re thinking about the internet compared to other software versioning), Tim is completely wrong about the big picture. Kevin Kelly wrote about this change at length in an article in the current issue of Wired: the key to success in this next stage of the web’s evolution is leveraging collective intelligence. I guess it’s the old debate between language purists, and language pragmatists.

What Is Web 2.0 by Tim O'Reilly 09/30/2005 Oct. 2009: Tim O'Reilly and John Battelle answer the question of "What's next for Web 2.0?" in Web Squared: Web 2.0 Five Years On. The bursting of the dot-com bubble in the fall of 2001 marked a turning point for the web. Memetics This article is related to the study of self-replicating units of culture, not to be confused with Mimesis. Memetics is a theory of mental content based on an analogy with Darwinian evolution, originating from the popularization of Richard Dawkins' 1976 book The Selfish Gene.[1] Proponents describe memetics as an approach to evolutionary models of cultural information transfer. The meme, analogous to a gene, was conceived as a "unit of culture" (an idea, belief, pattern of behaviour, etc.) which is "hosted" in the minds of one or more individuals, and which can reproduce itself, thereby jumping from mind to mind. Thus what would otherwise be regarded as one individual influencing another to adopt a belief is seen as an idea-replicator reproducing itself in a new host.

What Is Web 2.0 by Tim O'Reilly 09/30/2005 Oct. 2009: Tim O'Reilly and John Battelle answer the question of "What's next for Web 2.0?" in Web Squared: Web 2.0 Five Years On. The bursting of the dot-com bubble in the fall of 2001 marked a turning point for the web. Many people concluded that the web was overhyped, when in fact bubbles and consequent shakeouts appear to be a common feature of all technological revolutions. Shakeouts typically mark the point at which an ascendant technology is ready to take its place at center stage.

Game Studies 0102: Sims, BattleBots, Cellular Automata, God and Go. By Celia Pearce A Conversation with Will Wright by Celia Pearce Conducted in Will Wright's office at Maxis, September 5, 2001 CP: What is your philosophy of interactive design? WW: Ooh, a heavy question, a philosophy question. CP: It’s a big question, but I wanted to start you talking about why you design games. From Work to Play Play Suspended This essay got its start in my keynote remarks for the Digital Arts and Culture Conference in the Spring of 2001 and took its present form during the Summer and Fall of that unforgettable year. Those were not easy months in which to think about changes in media and culture, however momentous. With the implosion of the Internet bubble, the future that had recently looked so glorious tumbled suddenly from promise to delusion. A popular song from those days sardonically recalls “the time when new media / was the big idea,” suggesting that even nostalgia had come to work on Internet time. Or had that sort of time run out?

(Ideas) Consciousness At a certain stage of our evolution (Homo Habilis?), a rudimentary structured language developed. Probably holophrastic (i.e. one-word sentences) to begin with, then with two-word sentences. This contributed greatly to an increase in communication, and a perpetuating memory. This created an all new type of information network. democ.htm CyberDemocracy: Internet and the Public Sphere Mark Poster University of California, Irvine Free Labor: Producing Culture for the Digital Economy The real not-capital is labor. -Karl Marx, Grundrisse Working in the digital media industry is not as much fun as it is made out to be.

WADs, Bots and Mods: Multiplayer FPS Games as Co-creative Media This paper will focus on the inter-relationships between media, technology and culture as demonstrated by the online multiplayer FPS scene, and will make explicit the degree to which game texts and associated technology facilitate culture and the formation of community, and how in turn such social structures inflect and determine the development of computer games, related Internet technologies and subsequent models for software development and distribution. Beyond the idea of “participatory media”, I argue that multiplayer FPS games have become “co-creative media”; neither developers nor players can be solely responsible for production of the final assemblage regarded as “the game”, it requires the input of both. co-creative media”, Counter-Strike, first-person shooter, Game development, gaming culture, Half-Life, mod scene, multiplayer, online games, Quake

M/C Journal 1Computer and video games are one of the primary uses of personal computer technologies, and yet despite an increasing interest in cultural practices that are organised around computer and information technologies cultural studies has paid very little attention to this phenomenon. In the War of Desire and Technology Allucquére Roseanne Stone comments "that there seems no question that a significant proportion of young people will spend a significant and increasing proportion of their waking hours playing computer-based games in one form or another, and so far the implications of this trend have yet to be fully addressed in academic forums" (26). This Christmas will undoubtedly follow the trend of the last few years, with video game consoles and software being the biggest toy sellers.

pop-cult PLAY IT AGAIN, PAC-MAN by CHARLES BERNSTEIN State University of New York at Albany _Postmodern Culture_ v.2 n.1 (September, 1991) Copyright (c) 1991 by Charles Bernstein, all rights reserved. This text may be freely shared among individuals, but it may not be republished in any medium without express written consent from the author and advance notification of the editors. [1] Your quarter rolls into the slot and you are tossed, suddenly and as if without warning, into a world of controllable danger. Your "man" is under attack and you must simulate his defense, lest humanity perish and another quarter is required to renew the quest. [2] Drop in, turn on, tune out. [3] The theories of video games abound: poststructuralist, neomarxian, psychoanalytic, and puritanical interpretations are on hand to guide us on our journey through the conceptual mazes spawned by the phenomenon.