Physics suggests that the future has already happened - BBC Reel. The biggest questions about life, the Universe and everything - and how to answer them. 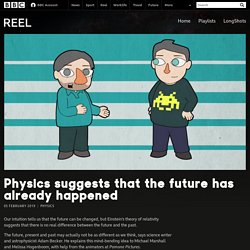 The future may be set in stoneOur intuition tells us that the future can be changed, but Einstein's theory of relativity suggests otherwise.Now Playing The other dimensions that could existWhy physics suggests there are hidden dimensions besides the ones we know.Watch now PhysicsEinstein's big idea made simpleEinstein’s theory of general relativity is famously weird and complicated, so we’ve explained it.Watch now ScienceDo you have many doppelgangers?

Could All Our Scientific Knowledge Come Tumbling Down Like A House Of Cards? Our entire cosmic history is theoretically well-understood, but only qualitatively. 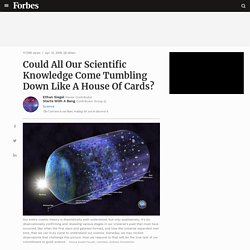 It's by observationally confirming and revealing various stages in our Universe's past that must have occurred, like when the first stars and galaxies formed, and how the Universe expanded over time, that we can truly come to understand our cosmos. Someday, we may receive observations that challenge this picture. How we respond to that will be the true test of our commitment to good science. Nicole Rager Fuller / National Science Foundation We’re always on the lookout for the next big thing, and even our best guesswork is often terrible at anticipating exactly where it will come from.

Yet revolutions in science are real, and when they occur, they cause us to rethink many things — and perhaps even everything — that we'd previously assumed to be true. Wikimedia Commons user Stigmatella aurantiaca The key test for us won't be in whether we arrive at that crossroads. 9 Very Helpful Healing Frequencies. “If you want to find the secrets of the universe, think in terms of energy, frequency and vibration.” ― Nikola Tesla “Everything is energy, we know this far. 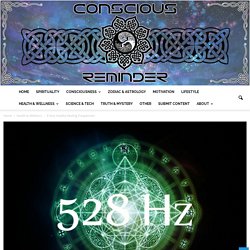 And Energy manifests in frequencies. Everything has a frequency. Facts. . – Albert Einstein To manifest the reality we want, all we need to do is feel the frequency we wish. It is quite simple once we manage a few very important details, such as the subconscious, the mind frequencies patterns we accumulate and hold on to, our precious defense mechanisms. To break the spell, the frequency change can only happen once we can really FEEL, from within. And the time to do it is NOW. The use of frequencies is not a new discovery. 174Hz – 12 (3) Remove pain 285Hz – 15 (6) Influence energy fields 396Hz – 18 (9) Liberating Guilt and Fear 417Hz – 12 (3) Undoing Situations and Facilitating Change 528Hz – 15 (6) Transformation and Miracles (DNA Repair) 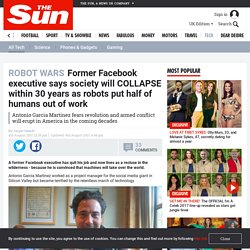 Antonio Garcia Martinez worked as a project manager for the social media giant in Silicon Valley but became terrified by the relentless march of technology. Facebook Getty - Contributor He reckons that machines will have taken half of humanity's jobs within 30 years, sparking revolt and armed conflict. So he quit his job, fled his home and now lives in woodland north of Seattle with a gun for protection. He spoke to new two-part BBC2 documentary "Secrets of Silicon Valley", which explores the growing influence of the tech hub on global development.

Mr Martinez said: "If the world really does end, there aren't going to be many places to run. "Within 30 years, half of humanity won't have a job. "I've seen what the world will look like in five to 10 years. This video isn't encoded for your device Getty Images Facebook friend. Gaia.