Martin Zalodek - Vienna Philharmonic. Japan goes ahead with year-end Beethoven 9s – Slipped Disc. The tradition of performing Beethoven’s ninth symphony in December stretches back, as we have described here, to the beginning of the First World War and reinforced by a German-Jewish refugee at the start of the Second. 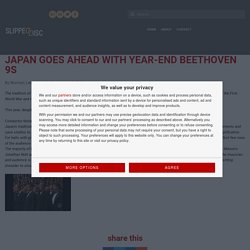 This year, despite Covid, it’s still going ahead. Conductor Keitado Harada writes from Tokyo:Japan’s tradition of performing Beethoven 9 in December does not stop because of this virus. During the fall there were several experiments and case studies to ensure the safety of performing choral works. For example, reducing the chorus to 4-8 singers per part and adding amplification. For halls with great acoustics, not adding a mic and reducing the string count. The Met Opera’s timpanist is now playing in … Korea – Slipped Disc.

From Jason Haaheim, principal timpanist at the Metropolitan Opera: … on December 18th, I sat down behind timpani in a room full of real live musicians to begin rehearsing the first movement of Beethoven 9, my first large ensemble rehearsal in 282 days. 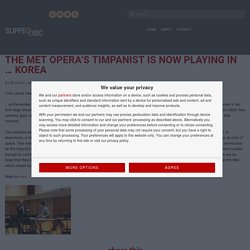 It’s almost impossible to describe the complexity of those onrushing emotions: joy, elation, relief, fear, serenity, guilt, reconnection, disorientation…all in a blender while my ears were on fire and my mind was contemplating the gravity of that moment. Two hundred and sixty-four days without safe access to timpani was by far my longest break in playing since I picked up my first pair of drumsticks in the fall of 1989, thirty-one years ago. Among the challenges facing percussionists and timpanists is that our gear takes up a lot of space. The Magic Flute. Book Review: 'Wagner's Parsifal: The Music of Redemption' Roger Scruton finds in this 19th-century work an antidote to many of our modern society’s ills. 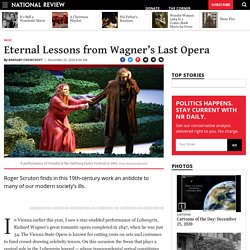 With choir in hard hats, fire-ravaged Notre Dame rings in Christmas. In a concession to the fact that the Gothic cathedral is still being rebuilt, the choristers wore construction hard hats and boiler suits, and there was no audience. 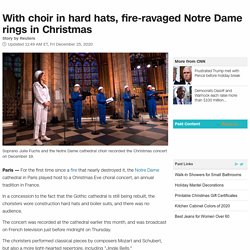 The concert was recorded at the cathedral earlier this month, and was broadcast on French television just before midnight on Thursday. The choristers performed classical pieces by composers Mozart and Schubert, but also a more light-hearted repertoire, including "Jingle Bells. " Hansel and Gretel. The Metropolitan Opera is streaming epics every night this week. The Metropolitan Opera will be closed through at least next September, but the New York institution continues to sustain opera lovers with free nightly streams of full operas from its archives. 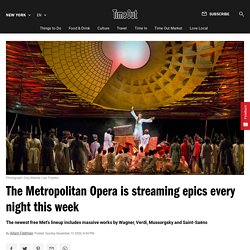 From December 14 through December 20, the company is going big with epic works by composers including Wagner, Verdi, Mussorgsky and Saint-Saëns. All but two of the productions were recorded in high definition for cinematic release as part of the Met series Live in HD. A different opera goes live on the Met's website at 7:30pm EST (12:30am GMT) every night and remains there until 6:30pm EST the next day. Lohengrin « parterre box - "The most essential blog in opera!" (New York Times) Where opera is king and you, the readers, are queens.

Bryn Terfel Returns to the Metropolitan Opera. (Sort Of.) The airy studio where Bryn Terfel practices is set a good few yards from the house in Penarth, Wales, that he shares with his wife and two young children. 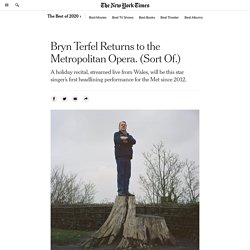 Given his thunderous bass-baritone voice, which has roared through the great roles of Mozart, Puccini, Verdi and Wagner at opera houses around the world over the past 30 years, this is probably essential to family sanity. A few days before a holiday recital that will be streamed live by the Metropolitan Opera on Saturday from Brecon Cathedral, about 40 miles north of here, Mr. Terfel, 55, was seated at his piano in the room for a video call. Visible behind him was an antique poster advertising a Paris-Wales train route, and another for a production of Verdi’s “Falstaff” in Milan, in which he played the jovial title role. This wall of New Yorkiana was particularly poignant to see, since Mr.

His recent Met history has been a dark comedy of errors. “These are things that you never expect to stop you in your tracks,” Mr. Adriana Lecouvreur « parterre box - "The most essential blog in opera!" (New York Times) Where opera is king and you, the readers, are queens. Gran Teatre del Liceu Cancels Two 'La Traviata' Performances - Opera Wire. How to Stream Teatro alla Scala's Opening Night Gala Today - Opera Wire. The Teatro alla Scala is set to open its 2020-21 season on Dec. 7 with a gala performance entitled “A Riveder le Stelle.” 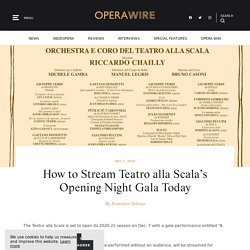 The gala, which is prerecorded and will be performed without an audience, will be streamed for audiences around the world. The gala will be broadcast in Italy on RAI 1, RAI 1 HD, and RAI Play while in France and other French-speaking countries and in Germany and other German-speaking countries the gala will be streamed on Arte Concert. Metropolitan Opera: Free opera every night Dec. 7-13. The Metropolitan Opera is streaming free encore presentations every night during the pandemic from the Live in HD series on their website. 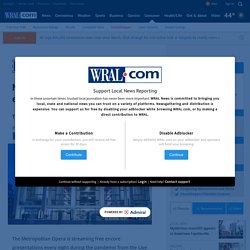 Each stream becomes available at 7:30 p.m. EDT and remains accessible for on-demand viewing until 6:30 p.m. the following day. See all the details including the schedule for each week on their website. Met Stars Live in Concert: The Met is also offering a new pay-per-view concert series with top artists. It’s good to be king « parterre box - "The most essential blog in opera!" (New York Times) Where opera is king and you, the readers, are queens. Born on this day in 1863 composer Pietro Mascagni. 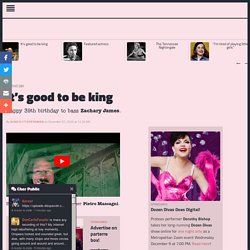 Born on this day in 1879 composer Rudolf Friml. Birthday anniversaries of composer Ernst Toch (1887), mezzo-soprano Elisabeth Höngen (1906) and contralto Helen Watts (1927). Metropolitan Opera to Lock Out Stagehands as Contract Talks Stall. In one of the most serious labor disputes to erupt in the culture world since the coronavirus pandemic halted performances around the globe, the Metropolitan Opera said on Monday that it planned to lock out its stagehands at midnight after the union representing the workers balked at the company’s demands for pay cuts. 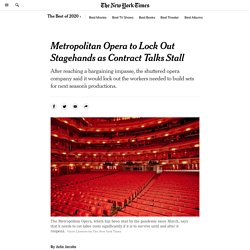 The Met, which has been shut by the pandemic since March, says that it needs to cut labor costs significantly if it is to survive until and after it reopens. So the company, which has furloughed most of its work force without pay since April, has offered to begin paying many employees up to $1,500 a week if their unions agree to long-term contracts that include a 30 percent cut in pay. Half of those cuts would be restored once the Met’s box office returns to pre-pandemic levels. Royal Opera House Announces Streaming Slate for December - Opera Wire. The Royal Opera House has unveiled a new streaming slate for the holiday season. For the purposes of this article, our focus will be solely on operatic performances. Showcases will be available via the company’s online platforms as well as Marquee TV and BBC, among others.

No other music reaches the heights of The Lark Ascending – so I’m ending my career with it. US star soprano misses La Scala gala season-open debut. MILAN (AP) — Soprano Lisette Oropesa was to be the first American to sing a title role in the gala season opener at La Scala since Maria Callas in the 1950s. Then Italy’s virus cases surged. An outbreak in both La Scala’s chorus and its orchestra forced the country’s premier opera house to cancel for the first time one of the top events on Europe’s cultural calendar.

Oropesa is now set to be one of more than 20 opera stars, among them Placido Domingo, Roberto Alagna and Piotr Beczała, recording arias and duets from the tiered theater for a broadcast gala event marking the traditional Dec. 7 opening. But there will be no glittering crowds, and no celebratory dinner. In fact, on Monday night the theater in Milan will be mostly empty. By then, Oropesa will be in Barcelona, where she is performing next week. And doing on the La Scala stage for the coveted season-opener is even bigger. “It is a rare thing to get that honor, and it is definitely important to me.

Halfway to heaven « parterre box - "The most essential blog in opera!" (New York Times) Where opera is king and you, the readers, are queens. On World Opera Day, Italy goes dark for a month – Slipped Disc. Conducting The Ring Cycle: A Marathon of Music. 4/4 review – a powerhouse of a programme from the Royal Opera. The Royal Opera opened its doors to its first post-lockdown live audience for 4/4, a quartet of staged vocal works, none of them originally intended for the theatre, all of them dealing in some way with isolation. They share a designer in Antony McDonald, though each is allocated a different conductor and director, with McDonald himself tackling the second of the sequence, Samuel Barber’s Knoxville: Summer of 1915.

Wexford Festival Opera: Watch Rossini's Petite messe solennelle. Welcome to Wexford Festival Opera, presented in association with RTÉ Culture and RTÉ Player - over the next week, we'll be bringing you the best of WFO 2020 - find out more here. This performance of Rossini's Petite messe solennelle, considered one of the most remarkable compositions of his career, demonstrated by his use of beautiful, memorable melodies and rhythmic vitality, is dedicated to the memory of the victims of the COVID-19 pandemic - watch it above. Performed in its original version from the stage of the National Opera House with two pianos, harmonium, four soloists and chorus, it will be conducted by Kenneth Montgomery with instrumentalists Finghin Collins (first pianist), Carmen Santoro (second pianist), Andrew Synnott (harmonium), and soloists Claudia Boyle (soprano), Tara Erraught (mezzo-soprano), Pietro Adaíni (tenor), John Molloy (bass) and the Wexford Factory Ensemble.

Duration: 90 mins (no interval) 10 Years of Staging The Amazing. Siegfried review – Jurowski showcases Wagner with wonder and excitement. Opera Review: Recalling Highlights of 2010-2019. James Valenti and Angela Gheorghiu in La Traviata at the Met. Marty Sohl / Metropolitan Opera. A Master of Winter Writes His First Opera: ‘The Snow Queen’ MUNICH — You could be forgiven for assuming the composer Hans Abrahamsen has an obsession with winter. He did, after all, once write a piece called “Winternacht” (“Winter Night”), and perhaps his most famous work is “Schnee” (“Snow”). His song cycle “let me tell you” evokes a landscape as wintry as one in a Bruegel painting. And there is no metaphor more apt to describe Mr. Abrahamsen’s music than a snowflake: pleasantly soft and simple from a distance, mathematically precise and complex under a microscope.

But, Mr. Review: A Young Soprano Meets the Hype at the Met Opera.