Just What Were Donald Trump's Ties to the Mob? In his signature book, The Art of the Deal, Donald Trump boasted that when he wanted to build a casino in Atlantic City, he persuaded the state attorney general to limit the investigation of his background to six months. 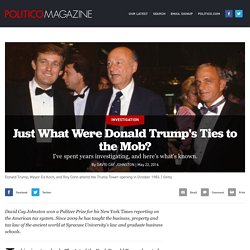 Most potential owners were scrutinized for more than a year. Trump argued that he was “clean as a whistle”—young enough that he hadn’t had time to get into any sort of trouble. He got the sped-up background check, and eventually got the casino license. But Trump was not clean as a whistle. Beginning three years earlier, he’d hired mobbed-up firms to erect Trump Tower and his Trump Plaza apartment building in Manhattan, including buying ostensibly overpriced concrete from a company controlled by mafia chieftains Anthony “Fat Tony” Salerno and Paul Castellano.

Story Continued Below Why did Trump get his casino license anyway? I’m not the only one who has picked up signals over the years. This is part of the Donald Trump story that few know. “Why’d Donald do it?” A Brief History of Donald Trump and the Mafia. Donald Trump with magazine editor Edward Kosner, center, and Roy Cohn, a Trump mentor and lawyer whose clients included bosses of two major New York crime families. 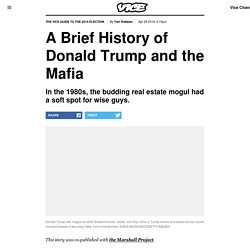 SONIA MOSKOWITZ/GETTY IMAGES This story was co-published with the Marshall Project. This Is How Donald Trump Actually Got Rich. President Donald J. 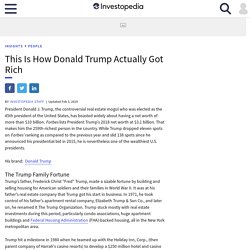 Trump, the controversial real estate mogul who was elected as the 45th president of the United States, has boasted widely about having a net worth of more than $10 billion. Forbes lists President Trump's 2018 net worth at $3.1 billion. That makes him the 259th-richest person in the country. While Trump dropped eleven spots on Forbes' ranking as compared to the previous year and slid 138 spots since he announced his presidential bid in 2015, he is nevertheless one of the wealthiest U.S. presidents. 21 Questions for Donald Trump. I have covered Donald Trump off and on for 27 years — including breaking the story that in 1990, when he claimed to be worth $3 billion but could not pay interest on loans coming due, his bankers put his net worth at minus $295 million. 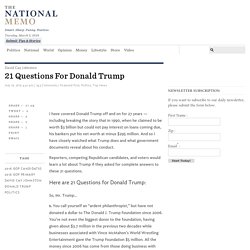 And so I have closely watched what Trump does and what government documents reveal about his conduct. Reporters, competing Republican candidates, and voters would learn a lot about Trump if they asked for complete answers to these 21 questions. So, Mr. Trump… 1. 21 Questions for Donald Trump. Questions for Trump. The Truth About Trump and the Mob. This article was originally published by the Marshall Project, a nonprofit news organization focused on the U.S. criminal justice system. 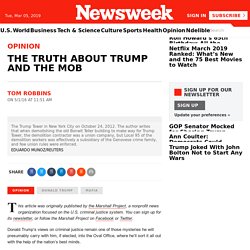 You can sign up for its newsletter, or follow the Marshall Project on Facebook or Twitter. Daughter of Sammy Gravano penning book on life in 'Mafia enclave of Staten Island' ~ Five Families of New York City. Karen Gravano Wiki, Dating, Married, Weight Loss, Daughter, Father. Donald Trump Sounds Like a Mafia Boss. How Scared Should Trump Be of Mueller? Ask John Gotti or Sammy “The Bull” Ten South, the high-security wing of the Metropolitan Correctional Center, in Lower Manhattan, is, by design, as grim as any corner of hell. 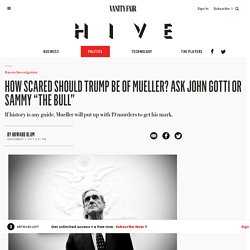 A half dozen narrow cells are lined one after the other, the overhead lights glow day and night, and the tiny window in each cell is frosted, allowing only an opaque hint of the world beyond the prison. There’s a slot in the solid cell door, but it’s kept shut most of the time, and so the prisoner’s unvarying horizon stretches as far as the four cinderblock walls.

Robert Mueller. Sixth director of the FBI; American attorney A graduate of Princeton University and New York University, Mueller served as a Marine Corps officer during the Vietnam War, receiving a Bronze Star for heroism and Purple Heart. 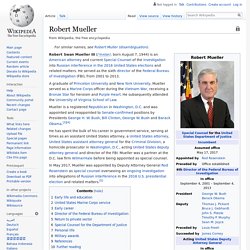 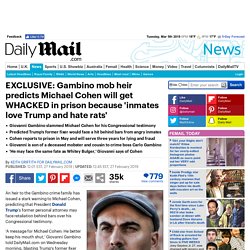 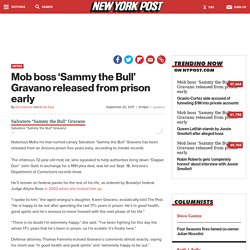