There Is a Crack in Everything, That’s How the Light Gets In: Leonard Cohen on Democracy and Its Redemptions. Trained as a poet and ordained as a Buddhist monk, Leonard Cohen (September 21, 1934–November 10, 2016) is our patron saint of sorrow and redemption. 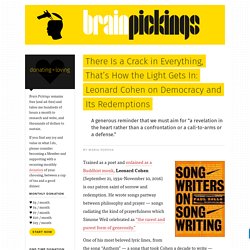 He wrote songs partway between philosophy and prayer — songs radiating the kind of prayerfulness which Simone Weil celebrated as “the rarest and purest form of generosity.” One of his most beloved lyric lines, from the song “Anthem” — a song that took Cohen a decade to write — remains what is perhaps the most meaningful message for our troubled and troubling times: “There is a crack in everything, that’s how the light gets in.” It springs from a central concern of Cohen’s life and work, one which he revisited in various guises across various songs — including in “Suzanne”, where he writes “look among the garbage and the flowers / there are heroes in the seaweed,” and in the iconic “Hallelujah”: “There’s a blaze of light / In every word / It doesn’t matter which you heard / The holy or the broken Hallelujah”. 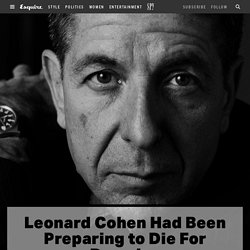 You were always the old guy in the club. You released your first album when you were 32 which, at the time, was ancient for any singer never mind a new one. You wrote "A Singer Must Die" in 1974, so you had been predicting this moment, for yourself and for us, for over four decades. You were the peculiar case, or maybe it's not that peculiar, of a man obsessed with mortality who lives into his eighties. Still, the fact of your death arrived with a thud yesterday, a handful more darkness in a dark time. Best Leonard Cohen Songs to Listen to That Aren't Hallelujah—Leonard Cohen Greatest Hits. I stole the first Leonard Cohen album I ever owned. 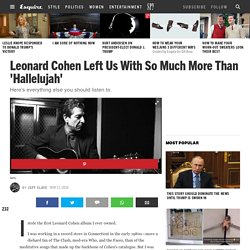 I was working in a record store in Connecticut in the early 1980s—more a diehard fan of The Clash, mod-era Who, and the Faces, than of the meditative songs that made up the backbone of Cohen's catalogue. But I was open-minded, too, when a co-worker thrust a cassette of The Best of Leonard Cohen into my hands one day with a simple "you need to hear this. " With its mysterious cover and unusual song titles, I took the album home and gave it a spin. As soon as "Suzanne," the opening cut, kicked in, I was transfixed. 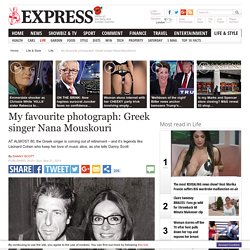 From the very first time I heard Leonard sing, his music touched my heart. It is never just a simple song – it is a philosophy, an invitation to think about this world we live in. I am not trying to compare myself to him, but I hope that my songs are a little bit like this. For me, the best music is more than just ‘la-la-la’ and romance – it must contain a message, too. Leonard came to see one of my concerts in Canada and after the show, he invited me over to his house for coffee.