Ideas.ted. Sarah Jane Souther / TED Betty Bigombe had already hiked eight miles through the jungle, and there was still no sign of life. 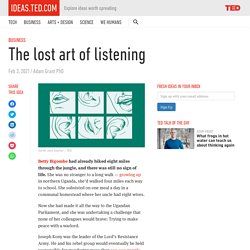 She was no stranger to a long walk — growing up in northern Uganda, she’d walked four miles each way to school. She subsisted on one meal a day in a communal homestead where her uncle had eight wives. Now she had made it all the way to the Ugandan Parliament, and she was undertaking a challenge that none of her colleagues would brave: Trying to make peace with a warlord. Joseph Kony was the leader of the Lord’s Resistance Army. In the early 1990s, Betty convinced the Ugandan president to send her in to see if she could stop the violence. When Betty finally made contact with the rebels after months of effort, they were insulted at the prospect of negotiating with a woman. Although the peace effort didn’t succeed, opening Kony’s mind to conversation was a remarkable accomplishment. The key, she explained, was not persuading or even coaxing, but listening.

Hbr. In 1992 one of us (Kevin) joined Amgen, the world’s largest biotechnology company, as its president and chief operating officer. 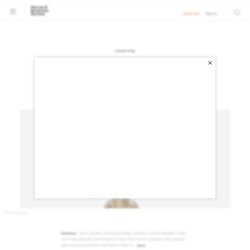 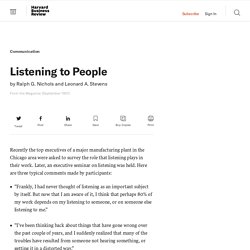 Later, an executive seminar on listening was held. Here are three typical comments made by participants: “Frankly, I had never thought of listening as an important subject by itself. But now that I am aware of it, I think that perhaps 80% of my work depends on my listening to someone, or on someone else listening to me.” “I’ve been thinking back about things that have gone wrong over the past couple of years, and I suddenly realized that many of the troubles have resulted from someone not hearing something, or getting it in a distorted way.” 04092020 BCO 008. Twitter. ‘We vragen zoals we ademhalen, te snel en te oppervlakkig’ The Age Of The Loudest Voice Is Over, Welcome To The Decade Of Listening. The second decade of the new millennium will go down as the loudest in history. 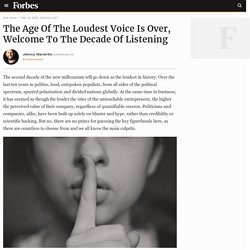 Over the last ten years in politics, loud, outspoken populists, from all sides of the political spectrum, spurred polarization and divided nations globally. At the same time in business, it has seemed as though the louder the cries of the untouchable entrepreneur, the higher the perceived value of their company, regardless of quantifiable success. Politicians and companies, alike, have been built up solely on bluster and hype, rather than credibility or scientific backing. But no, there are no prizes for guessing the key figureheads here, as there are countless to choose from and we all know the main culprits.

We adviseren ons suf, en luisteren te weinig. Www.forbes. When I ask my public relations students why they want to get into the field, they say they like to talk, so they figured it was a field suited for them. 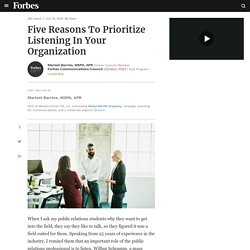 Speaking from 25 years of experience in the industry, I remind them that an important role of the public relations professional is to listen. Wilbur Schramm, a mass communications scholar, said, “Listening is a powerful tool.” Listening is underrated, and organizations would benefit greatly by taking Schramm’s advice. An article in the Public Relations Journal describes listening as “a complex function of affective processes (involving motivation to attend to others), behavioral processes (involving verbal or nonverbal feedback) and cognitive processes (involving attending to, understanding, receiving and interpreting content and messages).” Emotional validation is a basic human need. Here are five reasons to prioritize this important tool in the management process. Listening-relationships-marriage-closeness-communication-bias.amp.

A prime example, he said, was when he gave his wife what he thought was the perfect gift: a behind-the-scenes tour of the Shedd Aquarium in Chicago, during which she would get to feed the dolphins, beluga whales and penguins. 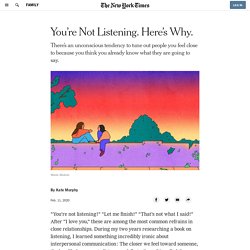 He thought she’d love it because she’d once expressed interest in swimming with dolphins. But she didn’t love it. At all. She was annoyed because she was pregnant at the time and suffering from morning sickness. How to Be a Better Listener - Smarter Living Guides. Spraakmakers - woensdag 21 november 2018, 09:30 - 11:30 uur. Brené Brown: Listening to shame. Good Managers vs Bad Managers - Kaplan Business School. Published 10 February 2018, Updated 04 September 2018 Good Managers vs Bad Managers: Which one are you? 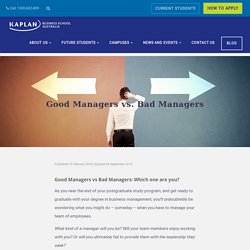 As you near the end of your postgraduate study program, and get ready to graduate with your degree in business management; you’ll undoubtedly be wondering what you might do – someday – when you have to manage your team of employees. What kind of a manager will you be? Will your team members enjoy working with you? Or will you ultimately fail to provide them with the leadership they seek? Will you be a good manager or a bad one? Knowing the difference. Werken aan Positieve Gezondheid in de ouderenzorg. Luistercirkels faciliteren collectieve intelligentie - Embodied Learning. 5 Skills of Really Amazing Listeners. Most people like to think what they have to say is important. 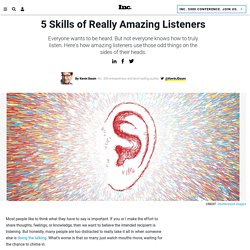 If you or I make the effort to share thoughts, feelings, or knowledge, then we want to believe the intended recipient is listening. But honestly, many people are too distracted to really take it all in when someone else is doing the talking. What's worse is that so many just watch mouths move, waiting for the chance to chime in. Resisting the pull to rescue - Someone To Tell It To.

We are thrilled to share this guest post from our friend Tamsin Hartley, who is doing incredible work in the UK through The Listening Space. 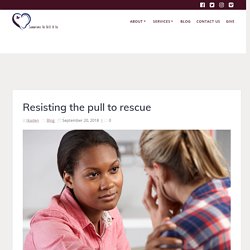 Thank you, Tamsin! Most of us have a natural desire to help others. Seeing someone in distress makes us feel uncomfortable. 5 Principles I Rely on to Become a Better Listener — Meeting Strategist. Always check to make sure you’re on the same page. 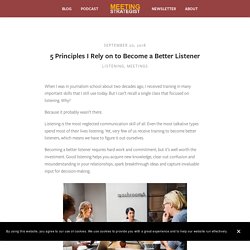 An effective way to do that is through mirroring: repeat the last few of the other person’s words and then go silent. Try something new! A listening experiment in your next team meeting. Luistervaardigheid voor leidinggevenden - Pentascope. ‘Rouw is de achterkant van liefde’ Www.forbes. ‘Complexiteit is juist de schoonheid van ons vak’ FAQ Series: How to Get People to Listen. The Sound of Silence: An Illustrated Serenade to the Art of Listening to One’s Inner Voice Amid the Noise of Modern Life.

“There are many fine things which we cannot say if we have to shout,” Henry David Thoreau observed in contemplating how silence ennobles speech. A year earlier, he had written in his journal: “I wish to hear the silence of the night, for the silence is something positive and to be heard.” It’s a sentiment of almost unbearable bittersweetness today, a century and a half later, as we find ourselves immersed in a culture that increasingly mistakes loudness for authority, vociferousness for voice, screaming for substance.

We seem to have forgotten what Susan Sontag reminded us half a century ago — that “silence remains, inescapably, a form of speech,” that it has its own aesthetic, and that learning to wield it is among the great arts of living. Goldsaito’s lyrical writing, part ballad and part haiku, and Kuo’s illustrations, midway between manga and Chris Ware yet thoroughly original, carry the story with effortless poetic enchantment. Then the koto player played. Zeggenschap in zorg. Reinventing Organizations in de praktijk. Are Your Communication Skills Hindering Your Marketing Career? One of the key changes in the role of marketing today is how much interaction and engagement marketing needs to have with other functions in order for marketing to attain their own stated goals.

New responsibilities require marketers to acquire a new skill set to be successful. While the most obvious skills are technical, a skill set that is largely ignored, but is the foundation of modern marketing is communication. Develop Basic Communication Skills The digital skills gap for the modern marketer is growing wider every day. At the same time, the need for soft skills is exploding. Many skills exist in the communications arsenal of the modern marketer. Active Listening. Heather Lanier: 'Goed' en 'slecht' zijn onvolledige verhalen die we onszelf vertellen. Www.forbes.

Cookiewall. Exploring what an interruption is in conversation. Www.forbes. People Really Aren't Listening to You and Here's Why. Why Pets are the Best Listeners - Communication Expert Amy Castro. If you have pets, you probably spend at least some time each day talking to them. On an intellectual level, most of us realize that our pets don’t really understand a lot of what we say to them. Although they can master the meaning of many words, the odds that they fully understand what we’re saying when we have a conversation with them is slim. In a 2010 Associated Press Poll, one third of pet-owning married women said their pets are better listeners than their husbands.

Eighteen percent of pet-owning married men said their pets are better listeners than their wives. Researchers at the University of Sussex in the U.K., found that dogs turn their heads when they hear words they know (like “Come!”) Cookiewall. - Ziel & Zorg. 10 Ways to Immediately Improve Your Listening (and Networking) Skills. Listening for a Patient’s Story. When I move to shake hands with Jack, a 70-year-old new patient and my last of the morning, I see the large white envelope. Records, most likely. The Power Of Listening. Active Listening: A Key Professional Skill.

Think back to the last conversation you had. Were you focused on the other person and what the other person was saying? Were you thinking about what you wanted to say next while your conversation partner was still mid-sentence? Was your mind somewhere else entirely—the backlog of emails in your inbox, perhaps, or what to have for lunch today? Your answers to those questions can help you determine what type of communication you use: active or passive. Active communication happens when you give your full attention to your conversation partner, really listen to them, and respond appropriately.

Well.blogs.nytimes. 5 Steps for Becoming an Excellent Listener. Consulting - Master The Forgotten Art of Listening. The most basic human need is to understand and to be understood. But most people don’t truly listen to others. Most people listen with the goal or intent of responding. These Emotionally Intelligent Habits Can Make You A Better Listener. 1. Reinforce What Others Feel, Not Just What They Say. Why Being a Good Listener is More Important Than Ever - The Latimer Group. Listening is a big topic at The Latimer Group. De stille meerderheid. Waardering uitspreken doe je door écht naar medewerkers te luisteren.