Peasants for Plutocracy: How the Billionaires Brainwashed America (Mini-Documentary) 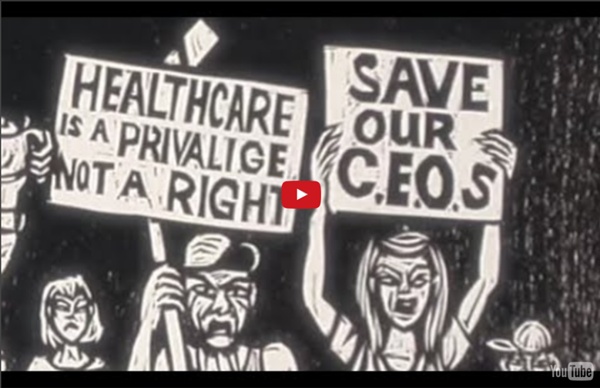 Has Donald Trump never 'promoted or encouraged violence,' as Sarah Huckabee Sanders said? Has President Donald Trump promoted violence? At a White House briefing, White House spokeswoman Sarah Huckabee Sanders answered with a definitive no. During a June 29, 2017, press briefing, CBS News’ Major Garrett asked Huckabee Sanders about some of Trump’s recent tweets, including a pair directed at "low I.Q. Crazy Mika" and "Psycho Joe" -- the hosts of MSNBC’s Morning Joe. Trump mocked Mika Brzezinski by tweeting that she had been "bleeding badly from a face-lift" during a visit to Mar-a-Lago. Garrett said that "some have suggested" that Trump’s tweets have "misconstrued one of the messages that should have been gathered" after the shooting of House Majority Whip Steve Scalise, R-La., and several others at a congressional baseball practice.

DeVos and the Issue Of College Sexual Assault Take Center Stage At ALEC The Blue Bear, looking in the window of the Colorado Convention Center in Denver. (Photo by Joel Gillman | Flickr CC 2.0) This post originally appeared at Exposed by CMD. Denver’s massive Blue Bear will be peering in the windows as US Education Secretary Betsy DeVos headlines the 44th American Legislative Exchange Council (ALEC) Annual Meeting being held at the Colorado Convention Center’s Hyatt Regency Hotel July 19-21. Other big names speaking at the event include Trump defender-in-chief Newt Gingrich, Labor Secretary Alexander Acosta, Secretary of the Interior Ryan Zinke, Republican pollster Frank Luntz and local megadonor and light beer magnate Peter Coors, who chairs the right-wing Coors Foundation. The Center for Media and Democracy reported that there will be a debate on the ALEC draft model bill to repeal the 17th Amendment, but many other controversial issues will be on the ALEC agenda as the meeting gets underway tomorrow.

The First Amendment Is in Danger – Part 1 Reporters attempt to pose questions to President Donald Trump during a news conference on Feb. 16, 2017. (Photo by Mario Tama/Getty Images) Of all the incredible statements issuing from the fantasy factory that is the imagination of Donald Trump, the one he recently made in a speech to graduates of the Coast Guard academy, that “no politician in history — and I say this with great surety — has been treated worse or so unfairly” sets an unenviable record for brazen ignorance plus a toxic mix of self-aggrandizement and self-pity. In his eyes, the most villainous persecutors are the mainstream “fake news” organizations that dare to oppose his actions and expose his lies. Such a bill might accuse the press of “seditious libel,” meaning the circulation of an opinion tending to induce a belief that an action of the government was hostile to the liberties and happiness of the people. How Trump would relish that kind of imaginary power over his enemies!

Donald Trump’s Populism Decoded: How a Billionaire Became the Voice of the “Little People” Reformers like the cartoonist Joseph Keppler depicted the Senate as controlled by the giant moneybags, who represented the nation's financial trusts and monopolies. (Image courtesy of Wikicommons) Campaigning for a Republican congressional candidate in the hotly contested June 2017 special election outside of Atlanta, Agriculture Secretary and former Georgia Gov. Sonny Perdue tried to sum up the appeal of President Donald J. It's Official: How the Koch Brothers Killed Trump’s Job Plan It’s Official: How the Koch [...] This post originally appeared at Alternet. As the 100-day mark of Donald Trump’s embattled presidency approaches, it’s official: the self-proclaimed champion of America’s forgotten workers has no jobs plan. In announcing his new tax plan, President Trump quietly abandoned his biggest legislative initiative aimed at creating American jobs, and postponed again his ambitious but vague trillion-dollar infrastructure jobs program. Trump’s problem is translating his rhetoric into reality.

How Chief Joseph of the Nez Perce became a hero of civil rights advocates. Edward S. Curtis/Library of Congress On July 4, 1872, settlers of the Grande Ronde Valley in northeastern Oregon paraded through the streets of their tiny county seat, La Grande, before sitting down for a feast and public recitation of the Declaration of Independence. Afterward, two guests stayed behind—large men about 30 years old, their long braids banded and feathered, wearing bright blankets, clusters of necklaces, and intricately beaded shirts and leggings. Trump's New Project: Legalizing Discrimination Under the Guise of Religious Freedom With the election of Donald Trump came sweeping fear amongst the LGBT activist community that the President would act against their interests, and that America would quickly witness regressive reforms in the wake of Obama’s progressive administration. It seems that the fears of LGBT activists and their allies across the United States may soon be realized, with President Trump signing last week an executive order regarding religious liberty that could see discriminative acts against members of the LGBT community legalized. This executive order could prove to be a distressing blow, particularly following Obama’s presidency, during which the LGBT community witnessed vast successes such as the Hate Crimes Prevention Act of 2009, and the overturning of ‘Don’t Ask Don’t Tell’.