The Lost Cradle of Civilization. I've been toying with the idea of writing this thread for a while. 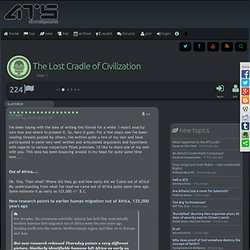 I wasn't exactly sure how and where to present it. So, here it goes. For a few years now I've been reading threads posted by others, I've written quite a few of my own and have participated in some very well written and articulated arguments and hypothesis with regards to various conjecture filled premises. I'd like to share one of my own with you. This idea has been bouncing around in my head for quite some time now..... Out of Africa.... Ok, fine, Then what? New research points to earlier human migration out of Africa, 125,000 years ago For decades, the consensus scientific opinion has held that anatomically modern humans first migrated out of Africa some 60,000 years ago, heading north into the eastern Mediterranean region and then on to Europe and Asia. ETCSL:ETCSLcuneiform. Introduction Cuneiform writing was most probably invented in Uruk in southern Mesopotamia (modern Iraq) about 3400 - 3300 BCE (Glassner 2003:45). 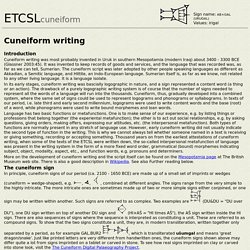 It was invented to keep records of goods and services, and the language that was recorded was, as far as we can tell, Sumerian. The cuneiform script was later adopted by other people speaking languages as different as Akkadian, a Semitic language, and Hittite, an Indo-European language. Sumerian itself is, as far as we know, not related to any other living language. It is a language isolate. Sumerian literature: ETCSL: The Electronic Text Corpus of Sumerian Literature. The Electronic Text Corpus of Sumerian LiteratureCatalogues: by date | by number | in full | Website info: navigation help | site description | display conventions | recent changesProject info: consolidated bibliography | about the project | credits and copyright | links Now, I swear by the sun god Utu on this very day -- and my younger brothers shall be witness of it in foreign lands where the sons of Sumer are not known, where people do not have the use of paved roads, where they have no access to the written word -- that I, the firstborn son, am a fashioner of words, a composer of songs, a composer of words, and that they will recite my songs as heavenly writings, and that they will bow down before my words...... 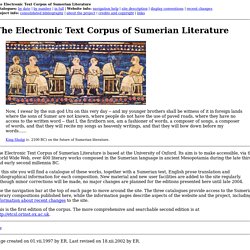 King Shulgi (c. 2100 BC) on the future of Sumerian literature. The Sumerian king list: translation. The Electronic Text Corpus of Sumerian LiteratureCatalogues: by date | by number | in full | Website info: navigation help | site description | display conventions | recent changesProject info: consolidated bibliography | about the project | credits and copyright | linksThis composition: composite text | bibliography (In the following translation, mss. are referred to by the sigla used by Vincente 1995; from those listed there, mss. 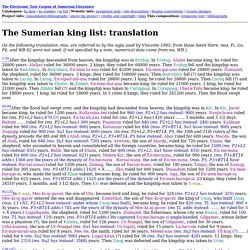 (In mss. 211-223In Mari, Anbu (?) (mss. (ms. 308-334In the army (ms. Ancient Sumeria Discoveries That Have Astounded Todays Historians New Documentary 2018. Mesopotamia - The Sumerians. Forbidden History of the Sumerians [FULL VIDEO] The Ancient Ones. Disclosing Knowledge from the Sumerian Tablets. Sumer is modern day Iraq, loosely translated Sumer stands for “land of the civilized kings” or “native land”. 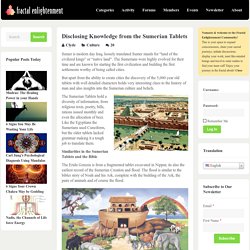 The Sumerians were highly evolved for their time and are known for starting the first civilization and building the first settlements worthy of being called cities. But apart from the ability to create cities the discovery of the 5,000 year old tablets with well detailed characters holds very interesting clues to the history of man and also insights into the Sumerian culture and beliefs. The Sumerian Tablets hold a diversity of information, from religious texts, poetry, bills, rations issued monthly and even the allocation of beer. Like the Egyptians the Sumerians used Cuneiform, but the older tablets lacked grammar making it a tough job to translate them.