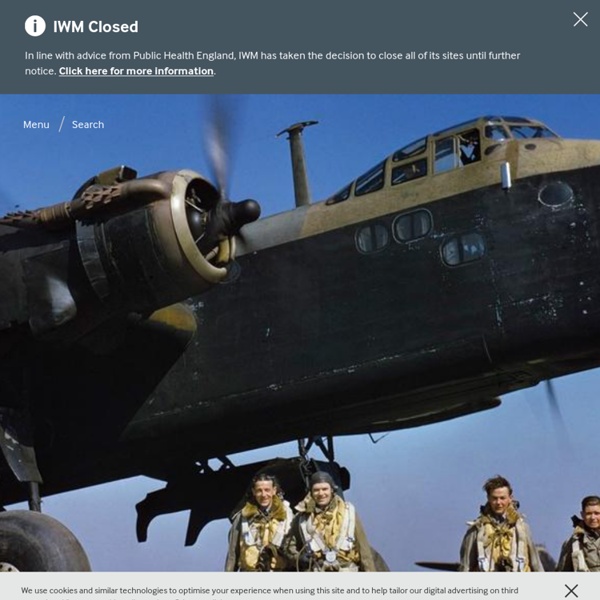 World War One World War One An A to Z of World War One Timeline of World War One 1914 and World War One ICT in the Curriculum 2012 - ICT in the Curriculum 2012 Can't say the NSA/PRISM security services surveillance controversy has got me very hot under the collar. Maybe its just that I struggle to get excited about Big Brother-esque snooping, when privacy is something of a redundant concept these days - CCTV is everywhere in the UK, even in Welsh forests! You are being watched! Museum Mile A walk along Museum Mile provides a fascinating insight into London, past and present. From King's Cross to the River Thames, discover 12 of the city's most extraordinary museums and galleries and their equally diverse collections. Take in the beauty of Van Gogh at The Courtauld Gallery and Shakespeare's First Folio at the British Library. Marvel at 400 years of anatomical history at the Hunterian Museum and witness the forefront of medical science at the Wellcome Collection.

German Propaganda Archive (Guide Page) Nazi and East German Propaganda Guide Page Propaganda was central to Nazi Germany and the German Democratic Republic. The German Propaganda Archive includes both propaganda itself and material produced for the guidance of propagandists. The goal is to help people understand the two great totalitarian systems of the twentieth century by giving them access to the primary material. For further information on the site, see the FAQ. WikiPrimaryHistory? This page began life as a rather tongue in cheek response to the new English National Curriculum for History, published for consultation on 7th February 2013. The sustained focus in the key stage one and two programmes of study on factual knowledge to be acquired has caused something of stir amongst teachers, teacher educators and academics. The thinking behind the approach can be found in this recent speech. Concerns have been raised about the age-appropriateness of some of the material and the sheer quantity of stuff to be covered. With the idea of crowdsourcing the curriculum in mind, I thought it would be useful and instructive to link the new content to explanatory material, with Wikipedia being an obvious source.

Top 10: Unusual British museums A selection of Britain's most bizarre and quirky museums. Dog Collar Museum, Leeds Castle, Maidstone A collection of dog collars, mostly dating from the Middle Ages (no dogs admitted). www.leeds-castle.com JCS Online Resources The acclaimed Churchill Archive is now free for the first time to schools worldwide thanks to a $1 million donation from philanthropist Laurence Geller CBE. "All children should understand Sir Winston Churchill’s fundamental place in our nation’s history,” says the Rt Hon Nicky Morgan MP, Secretary of State for Education and Minister for Women and Equalities, "and schools can now seize the opportunity to access the Churchill Archive – a tremendous cache of documents that bring history to life.” Opening up exciting new opportunities for the teaching and learning of History at secondary level, the Churchill Archive - described by History Today as "the real gem of online Churchill resources" - offers cross-searchable online access to over 800,000 original documents.

10 Apps for Teaching History Alterations to the National Curriculum are set to bring about significant changes in schools, with history one of the subjects which will be most affected. From 2014, pupils will be expected to complete a more rigorous history syllabus including a complete chronological history of Britain. In preparation, many schools will be reviewing the way they deliver history lessons. BBC Active has a range of history videos which can help them to comply with the strong emphasis on British history prescribed in the new curriculum. And, as it’s not just teaching materials but teaching methods that are undergoing something of a revolution, we've been taking a look at the pick of the latest apps for teaching history, both of Britain and beyond: 1.

Lebensraum: Policy or Rhetoric? When the Germans talked of Lebensraum, or ‘living space’, they used the term to denote a perceived need to have enough physical room to provide for themselves comfortably. In particular, it identified the possession of enough land to feed a population large enough to ensure Germany a place on the world stage. Hitler did not just start talking about the need to conquer Lebensraum in 1941; its origins lay much further back than even 1939. Anti-Nazi newspaper columnists (for example in Der Deutsche in Polen) observed during the late 1930s that Hitler’s foreign policy involved something more than just planless initiatives, improvisation and contradictory imperatives. They said that its main direction had been well-established during the mid-1920s.

List of museums in Suffolk This list of museums in Suffolk, England contains museums which are defined for this context as institutions (including nonprofit organizations, government entities, and private businesses) that collect and care for objects of cultural, artistic, scientific, or historical interest and make their collections or related exhibits available for public viewing. Also included are non-profit art galleries and university art galleries. Museums that exist only in cyberspace (i.e., virtual museums) are not included. To use the sortable table, click on the icons at the top of each column to sort that column in alphabetical order; click again for reverse alphabetical order. The List[edit] Defunct museums[edit]

Who were the Black Diggers? Nearly 4,000 Indigenous people officially served during World War II (1939-1945), according to historian Robert Hall. Of those, about 3,000 were Aboriginal people and 850 Torres Strait Islander people. Other accounts suggest as many as 5,000 Indigenous people served. The War Service Land Settlement Agreement between the Federal Government and states resulted in soldier settlement legislation that granted returned service personnel land. While Indigenous service personnel were not excluded, many say they were rejected from the scheme. The treatment of Black Diggers during World War II is known to have further propelled the Indigenous rights movement, which led to the 1967 referendum.

I bet, but being in south of France I won't have the opportunity to visit them. Too bad! by bluefred Feb 6

The Imperial War Museums have plenty of events and material to mark the Centenary of World War One. by lwatts Jan 30