Mysticism. Spirituality. The term "spirituality" lacks a definitive definition, although social scientists have defined spirituality as the search for "the sacred," where "the sacred" is broadly defined as that which is set apart from the ordinary and worthy of veneration. 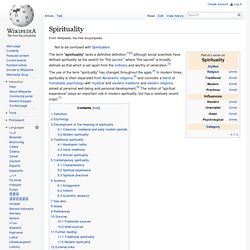 Definition[edit] Animism. Specifically, animism is used in the anthropology of religion as a term for the belief system or cosmology of some indigenous tribal peoples,[5] especially prior to the development and/or infiltration of colonialism and organized religion.[6] Although each culture has its own different mythologies and rituals, "animism" is said to describe the most common, foundational thread of indigenous peoples' "spiritual" or "supernatural" perspectives. 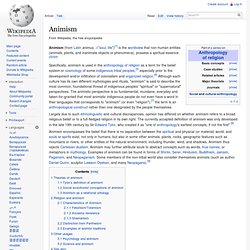 The animistic perspective is so fundamental, mundane, everyday and taken-for-granted that most animistic indigenous people do not even have a word in their languages that corresponds to "animism" (or even "religion");[7] the term is an anthropological construct rather than one designated by the people themselves. Largely due to such ethnolinguistic and cultural discrepancies, opinion has differed on whether animism refers to a broad religious belief or to a full-fledged religion in its own right.

Shamanism. The earliest known depiction of a Siberian shaman, produced by the Dutch explorer Nicolaes Witsen, who authored an account of his travels among Samoyedic- and Tungusic-speaking peoples in 1692. 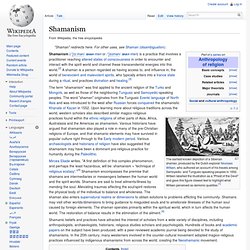 Witsen labelled the illustration as a "Priest of the Devil" and gave this figure clawed feet to highlight what Witsen perceived as demonic qualities.[1] Shamanism (/ˈʃɑːmən/ SHAH-mən or /ˈʃeɪmən/ SHAY-mən) is a practice that involves a practitioner reaching altered states of consciousness in order to encounter and interact with the spirit world and channel these transcendental energies into this world.[2] A shaman is a person regarded as having access to, and influence in, the world of benevolent and malevolent spirits, who typically enters into a trance state during a ritual, and practices divination and healing.[3]

Magic (paranormal) Magic or sorcery is an attempt to understand, experience and influence the world using rituals, symbols, actions, gestures and language.[1][2][3][4] Modern Western magicians generally state magic's primary purpose to be personal spiritual growth.[5] Modern theories of magic may see it as the result of a universal sympathy where some act can produce a result somewhere else, or as a collaboration with spirits who cause the effect.[6] The belief in and the practice of magic has been present since the earliest human cultures and continues to have an important religious and medicinal role in many cultures today.[7][8] Magic is often viewed with suspicion by the wider community, and is sometimes practiced in isolation and secrecy.[4] 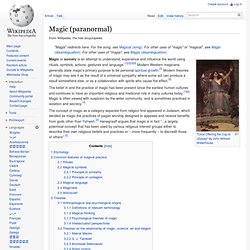 Alchemy. The Emerald Tablet, a key text of Western Alchemy, in a 17th-century edition Alchemy is an influential philosophical tradition whose practitioners have, from antiquity, claimed it to be the precursor to profound powers. 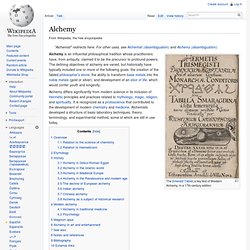 The defining objectives of alchemy are varied, but historically have typically included one or more of the following goals: the creation of the fabled philosopher's stone; the ability to transform base metals into the noble metals (gold or silver); and development of an elixir of life, which would confer youth and longevity.

Overview[edit] Alchemy is the art of liberating parts of the Cosmos from temporal existence and achieving perfection which, for metals is gold, and for man, longevity, then immortality and, finally, redemption. Modern discussions of alchemy are generally split into an examination of its exoteric practical applications and its esoteric aspects. Transcendentalism. Transcendentalism is a religious and philosophical movement that developed during the late 1820s and '30s[1] in the Eastern region of the United States as a protest against the general state of spirituality and, in particular, the state of intellectualism at Harvard University and the doctrine of the Unitarian church as taught at Harvard Divinity School. 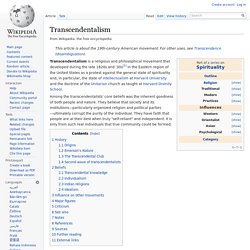 Among the transcendentalists' core beliefs was the inherent goodness of both people and nature. They believe that society and its institutions—particularly organized religion and political parties—ultimately corrupt the purity of the individual. Occult. Esotericism. Esotericism (or esoterism) signifies the holding of esoteric opinions or beliefs,[1] that is, ideas preserved or understood by a small group of those specially initiated, or of rare or unusual interest.[2] The term derives from the Greek, either from the comparative ἐσώτερος (esôteros), "inner", or from its derived adjective ἐσωτερικός (esôterikos), "pertaining to the innermost".[3] The term can also refer to the academic study of esoteric religious movements and philosophies, or to the study of those religious movements and philosophies whose proponents distinguish their beliefs, practices, and experiences from mainstream exoteric and more dogmatic institutionalized traditions.[4]

Art of memory. The art of memory (Latin: ars memoriae) is any of a number of a loosely associated mnemonic principles and techniques used to organize memory impressions, improve recall, and assist in the combination and 'invention' of ideas. 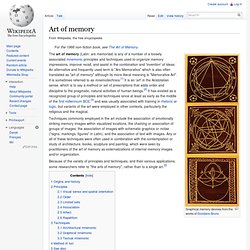 An alternative and frequently used term is "Ars Memorativa" which is also often translated as "art of memory" although its more literal meaning is "Memorative Art". Spiritualism. By 1853, when the popular song Spirit Rappings was published, Spiritualism was an object of intense curiosity. 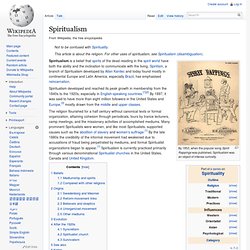 Spiritualism developed and reached its peak growth in membership from the 1840s to the 1920s, especially in English-speaking countries.[1][2] By 1897, it was said to have more than eight million followers in the United States and Europe,[3] mostly drawn from the middle and upper classes. The religion flourished for a half century without canonical texts or formal organization, attaining cohesion through periodicals, tours by trance lecturers, camp meetings, and the missionary activities of accomplished mediums. Beliefs[edit] Although various Spiritualist traditions have their own beliefs, known as Principles, there are some shared concepts:[citation needed] Mediumship and spirits[edit] Spiritualists believe in communicating with the spirits of discarnate humans.

Compared with other religions[edit] Meditation. Meditation is a practice in which an individual trains the mind or induces a mode of consciousness, either to realize some benefit[1] or as an end in itself.[2] The term meditation refers to a broad variety of practices (much like the term sports) that includes techniques designed to promote relaxation, build internal energy or life force (qi, ki, prana, etc.) and develop compassion,[3] love, patience, generosity and forgiveness. 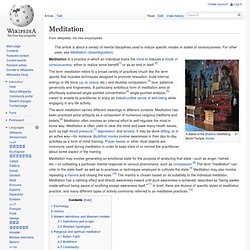 A particularly ambitious form of meditation aims at effortlessly sustained single-pointed concentration[4] single-pointed analysis,[5] meant to enable its practitioner to enjoy an indestructible sense of well-being while engaging in any life activity. Meditation may involve generating an emotional state for the purpose of analyzing that state—such as anger, hatred, etc. Etymology[edit] The English meditation is derived from the Latin meditatio, from a verb meditari, meaning "to think, contemplate, devise, ponder".[13] Tibetan Buddhism.

Tibetan Buddhism[1] is the body of Buddhist religious doctrine and institutions characteristic of Tibet, Mongolia, Tuva, Bhutan, Kalmykia and certain regions of the Himalayas, including northern Nepal, and India (particularly in Arunachal Pradesh, Ladakh, Dharamsala, Lahaul and Spiti district in Himachal Pradesh and Sikkim). It is the state religion of Bhutan.[2] It is also practiced in Mongolia and parts of Russia (Kalmykia, Buryatia, and Tuva) and Northeast China. Religious texts and commentaries are contained in the Tibetan Buddhist canon such that Tibetan is a spiritual language of these areas. The Tibetan diaspora has spread Tibetan Buddhism to many Western countries, where the tradition has gained popularity.[3] Among its prominent exponents is the 14th Dalai Lama of Tibet. Shingon Buddhism. The center image of the Garbhakosa Mandala, featuring the Five Wisdom Buddhas and attendant bodhisattvas. Shingon Buddhism (真言宗, Shingon-shū?) Is one of the mainstream major schools of Japanese Buddhism and one of the few surviving Esoteric Buddhist lineages that started in the 3rd to 4th century AD that originally spread from India to China through traveling monks such as Vajrabodhi and Amoghavajra.

The esoteric teachings would later flourish in Japan under the auspices of a Buddhist monk named Kūkai (空海), who traveled to Tang Dynasty China to acquire and request transmission of the esoteric teachings. Yoga. Yoga (/ˈjoʊɡə/; Sanskrit: योग, Listen) is an Indian physical, mental, and spiritual practice or discipline. There is a broad variety of schools, practices and goals in Hinduism, Buddhism (including Vajrayana and Tibetan Buddhism[2][3][4]) and Jainism.[5][6][7][6] The best-known are Hatha yoga and Raja yoga.

The origins of Yoga have been speculated to date back to pre-Vedic Indian traditions, but most likely developed around the sixth and fifth centuries BCE, in ancient India's ascetic circles, which are also credited with the early sramana movements. Tantra. For Tantric Buddhism, see Vajrayana. For the texts classified as Tantras, see Tantras. Tantra[note 1] is the name given by recent scholars to a style of meditation and ritual which arose in India no later than the 5th century AD.[1] Definitions[edit] Several definitions of Tantra exist. Eleusinian Mysteries. Votive plaque depicting elements of the Eleusinian Mysteries, discovered in the sanctuary at Eleusis (mid-4th century BC) Dionysian Mysteries. Orphism (religion) Orphic mosaics were found in many late-Roman villas. ‪Ripleys Believe It or Not! A Qigong (chi kung) Master Emits Heat From Hand at Over 200 degrees‬‏ Qigong Demo with Master "John Chang" ‪Mind Body & Kick Ass Moves Chi Gong Skills 1 Seriously sharp‬‏

‪Fight Quest 01 - Kung Fu 2/3‬‏ ‪Grant Morrison THE disinfo speech.flv‬‏ ‪Grant Morrison on Life and Fiction (naration)‬‏ ‪Alan Moore interviewed by Stewart Lee‬‏ ‪Alan Moore: Art is Magic‬‏ ‪alan moore on magic‬‏ ‪Alan Moore - The Magic Of Alan Moore - 1/9‬‏ Gnostic Society Library: Sources on Gnosticism and Gnosis. Almost all of the several dozen internet sites with collections of texts similar to our own obtained their material by directly or indirectly copying some files present at the Gnosis Archive. Ours was perhaps the first major collection of such texts to appear on "the web" in 1994, and thus has served as a source for others creating "their own" collections.

Unfortunately transcription errors, typos, and primitive HTML formatting were present in the massive amount of material added to the Gnosis Archive in our first years; in a repeated process of "copying" they have been very widely propagated around the internet. Over nearly two decades we have made many corrections to these texts. Euripides, Bacchae (e-text) Custom Search. Papyri Graecae Magicae.

The Enneads of Plotinus Index. Heraclitus - Fragments. General online resources for neoplatonic studies - International Society for Neoplatonic Studies. Metta Physics Magazine: Spirituality, Science and Religion Interface. Julian Huxley: The New Divinity. The Over-Soul. Texts : Essays: First Series : THE OVER-SOUL from Essays: First Series (1841) Ralph Waldo Emerson "But souls that of his own good life partake, He loves as his own self; dear as his eye They are to Him: He'll never them forsake: When they shall die, then God himself shall die: They live, they live in blest eternity.

" Henry More Space is ample, east and west, But two cannot go abreast, Cannot travel in it two: Yonder masterful cuckoo Crowds every egg out of the nest, Quick or dead, except its own; A spell is laid on sod and stone, Night and Day 've been tampered with, Every quality and pith Surcharged and sultry with a power That works its will on age and hour. William Blake - The Marriage of Heaven and Hell. The Alchemy web site on Levity.com. Austin Osman Spare. Hermetic.com » Austin Osman Spare <map name="admap55056" id="admap55056"><area href=" shape="rect" coords="0,0,468,60" title="" alt="" target="_blank" rel="nofollow" /></map><table cellpadding="0" cellspacing="0" style="width:468px;border-style:none;background-color:#ffffff;"><tr><td><img src=" style="width:468px;height:60px;border-style:none;" usemap="#admap55056" alt="" /></td></tr><tr><td style="background-color:#ffffff;" colspan="1"><center><a style="font-size:10px;color:#0000ff;text-decoration:none;line-height:1.2;font-weight:bold;font-family:Tahoma, verdana,arial,helvetica,sans-serif;text-transform: none;letter-spacing:normal;text-shadow:none;white-space:normal;word-spacing:normal;" href=" target="_blank">Ads by Project Wonderful!

Your ad could be here, right now. ‪Eliphas Leary - LAM 6: Sentient Symbols‬‏ ‪Eliphas Leary - LAM 35: Enochian Magick‬‏ ‪Eliphas Leary - LAM 17: Vibration and Information‬‏ Esoteric Archives. Theomagia, or, The temple of wisdome : in three parts, spiritual, celestial, and elemental : containing the occult powers of the angels of astromancy in the telesmatical sculpture of the Persians and AEgyptians : the mysterious vertues of the characters o. The discoverie of witchcraft : Scot, Reginald, 1538?-1599.