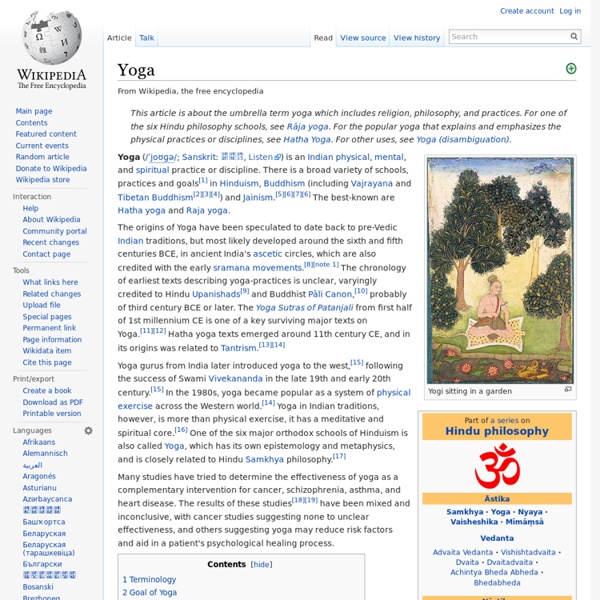 Yoga (/ˈjoʊɡə/; Sanskrit: योग, Listen) is an Indian physical, mental, and spiritual practice or discipline. There is a broad variety of schools, practices and goals in Hinduism, Buddhism (including Vajrayana and Tibetan Buddhism[2][3][4]) and Jainism.[5][6][7][6] The best-known are Hatha yoga and Raja yoga. The origins of Yoga have been speculated to date back to pre-Vedic Indian traditions, but most likely developed around the sixth and fifth centuries BCE, in ancient India's ascetic circles, which are also credited with the early sramana movements.[note 1] The chronology of earliest texts describing yoga-practices is unclear, varyingly credited to Hindu Upanishads[9] and Buddhist Pāli Canon,[10] probably of third century BCE or later. The Yoga Sutras of Patanjali from first half of 1st millennium CE is one of a key surviving major texts on Yoga.[11][12] Hatha yoga texts emerged around 11th century CE, and in its origins was related to Tantrism.[13][14] Terminology Goal of Yoga Buddhism

Asana In the practice of Yoga, Asana denotes the art of sitting still[1] and also any posture useful for restoring and maintaining a practitioner's well-being and improving the body's flexibility and vitality, cultivating the ability to remain in seated meditation for extended periods.[2] Such asanas are known in English as "yoga postures" or "yoga positions". Any way that we may sit or stand is an asana while a posture used in yoga is called a yogasana. Modern usage includes lying on the back, standing on the head and a variety of other positions.[2] In yoga asana refers both to the place in which a practitioner (yogin or yogi if male, yogini if female) sits and the posture in which he or she sits.[3] In the Yoga Sutras, Patanjali defines asana as "to be seated in a position that is firm, but relaxed".[4] Patanjali mentions the ability to sit for extended periods as one of the eight limbs of his system, known as Raja yoga,[5] but does not reference standing postures or kriyās. Benefits[edit]

Yoga Basics Column - Not All Yoga Is Created Equal You say Ashtanga, I say Kundalini. What's the difference? Use this guide to find the right yoga for you. By Jennifer Cook As studies continue to reveal yoga's many health benefits, this centuries-old Eastern philosophy is fast becoming the new fitness soul mate for workout enthusiasts. Contemporary devotees range from high-powered execs trying to keep hearts beating on a healthy note to image-conscious Hollywood stars striving for sleek physiques.

Yoga Health Benefits, History, Types, Statistics, Equipment, Poses and Postures on MedicineNet Benefits of Yoga Q: I would like to start taking yoga classes. Please explain the different types of yoga and the benefits of each type. Yoga Health Benefits: Flexibility, Strength, Posture, and More Why do I need to register or sign in for WebMD to save? We will provide you with a dropdown of all your saved articles when you are registered and signed in. Yoga is a great way to work on your flexibility and strength. Just about everyone can do it, too -- it's not just for people who can touch their toes or want to meditate.

Peruvian Amazon The Peruvian Amazon is the area of the Amazon jungle included within the country of Peru, from east of the Andes to borders with Ecuador, Colombia, Brazil and Bolivia. This region comprises 60% of the country and is marked by a large degree of biodiversity. Peru has the second largest portion of the Amazon rain forest after the Brazilian Amazon. Wild Things Night is my favorite time in the Amazon because that's when things get really loud. Some of the players in this orchestra can be identified: castanet frogs, for example, clickety-clacking rhythmically. Or the monkey frog, which makes an unpretty bonk, like an ambulance coming up on traffic. Occasionally, something crashes down through the brush, sounding awfully large—a big bat?A turkey vulture?

Travel views: September 22 to 28, 2012 Emailed by Carole and Alex Grenfell, who win two flights to Belfast from London Southend More feedback from our readers Making the most of Machu Picchu Your writer is correct to say you need to spend a night in Aguas Calientes in order to climb Huayna Picchu, but don’t be put off by his daunting description of the climb. As long as you are there before 10am you will have a good chance of being one of the first 400 allowed admission; the steel cables he mentions are hand rails to help you up the steps, some of which are very high.

US drone to map ancient Peru ruins Washington - Archaeologists in Peru plan to use a US-made drone to survey ancient Andean ruins, in the latest civilian application of the unmanned aerial vehicles used to hunt militants in the world's war zones. The device, which can fit in a backpack, is due to be tested later this month at the ruins of the 16th-century Spanish colonial town Mawchu Llacta, some 4 100m above sea level. The Skate Small Unmanned Aerial System will take only about 10 minutes to map the massive site the size of 25 football fields, saving the researchers months of time-consuming cataloguing, they said. "Mawchu Llacta, with its exceptionally well-preserved layout and architecture, provides an ideal case study," said anthropologist Steven Wernke and engineering professor Julie Adams of Vanderbilt University in an e-mail. "But the scale and complexity of it necessitated a novel approach to mapping. "This project is part of that process, as it will develop free, open source code for flight and imagery capture."