.id the population experts. Australian property bubble hasn't yet burst, but can house prices keep rising amid the pandemic? - ABC News. After years of dire predictions that Australia's property bubble could burst, national house prices continue to withstand the otherwise devastating impact of the coronavirus pandemic, and once again the doomsayers have been proven wrong. 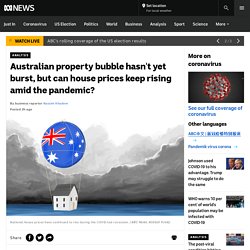 Data released this week from CoreLogic shows the national average rose 0.4 per cent in October, following five months of national declines during the COVID-19 pandemic. Now everyone's a statistician: Here's what armchair COVID experts are getting wrong - ABC News. Population decline due to coronavirus could cost economy $117b a year, KPMG forecast shows - ABC News. Who are the 75 Australian 'scientists and professionals' who say there is no climate emergency? - Fact Check. RMIT ABC Fact Check Updated about 6 hours agoThu 27 Feb 2020, 12:34am Periodically, petitions containing the signatures of "scientists" who are sceptical of human-induced global warming emerge, which seek to counter the views of climate scientists. 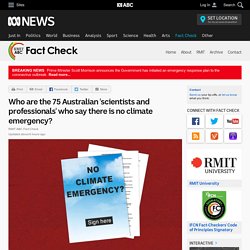 Liberal backbencher Craig Kelly highlighted one such recent petition on Facebook in October. "WHY ARE THEY IGNORING 500 SCIENTISTS & PROFESSIONALS? " Mr Kelly's post began, which reproduced in full a petition known as the European Climate Declaration, declaring there is "no climate emergency". Mr Kelly went on to say that Labor "denied the science and joined the climate crazies declaring a 'climate emergency'". A letter to the UN Secretary General which accompanied the petition introduced the signatories as "knowledgeable and experienced scientists and professionals in climate and related fields". 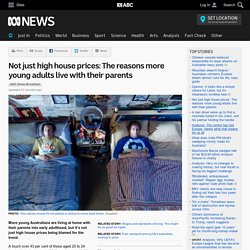 Key points: Young men are more likely to live at home than womenCultural backgrounds influence the likelihood of staying homeReasons for living at home extend to relationships and education A touch over 43 per cent of those aged 20 to 24 lived with their parents in 2016, compared with 36 per cent in 1981. There was a rise among those aged 25-29 and 30-34 as well. The Australian Institute of Family Studies (AIFS) has recently analysed the data to reveal the trends across city and country, men and women, and even cultural backgrounds. It found young men were more likely to stay home than women — particularly in capital cities — but the factors were more varied than just cost of living. Droughts influenced by humans for better and worse with aerosols and greenhouse gas emissions, study shows. Analysis Posted about 4 hours agoFri 3 May 2019, 9:00pm A new scientific paper suggests humans have had their fingerprints all over droughts for the past century, both in making them better and making them worse. 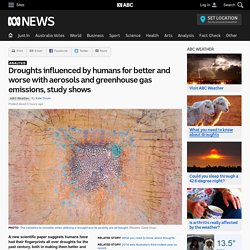 It's a big claim, especially as droughts are notoriously difficult to define and measure. Key points: New paper suggests humans have been influencing droughts since the beginning of the 21st century Dip in mid century droughts explained by increased aerosolsHuman influence on drought likely to continue Published in the journal Nature, the paper said humans had a clear influence on drought in the early 1900s through increased human-induced greenhouse gas emissions, but that the influence dipped in the mid 20th century.

The Economist Intelligence Unit released the Out of the Shadows Index, ranking 40 countries that cover 70 per cent of the world's population under 19 years of age. Australia is ranked top in the Asia-Pacific region, but trails the UK, Sweden and Canada, while Pakistan languishes at the bottom of the index. The overall ranking takes into account each country's "environment" for children, legal framework, the engagement of industry, civil society and media, and government commitment and capacity. What's the link between immigration and population? - Politics. Analysis. 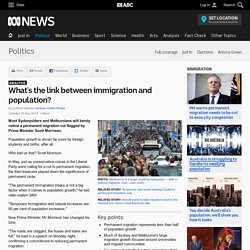 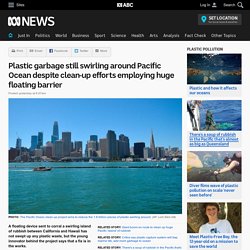 Population growth needs to be part of the national economic conversation. Analysis Updated earlier today at 7:15amFri 14 Dec 2018, 7:15am The debate over population has dominated the latest meeting between the national and state governments and is set to be a major and heated political issue at next year's federal election. 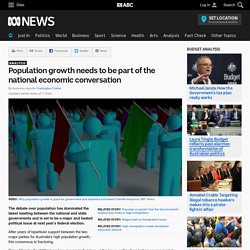 After years of bipartisan support between the two major parties for Australia's high population growth, this consensus is fracturing. Prime Minister Scott Morrison has unexpectedly taken up the issue, calling for a bottom-up approach to setting the immigration level based on what the individual states would like, recognising that population growth — and its associated costs — are not evenly spread. He has called for a reduction in immigration of around 30,000 people per year, from 190,000 to around 160,000, arguing it would help take pressure off congested cities. How life has changed for people your age.

5 Ways Writers Use Misleading Graphs To Manipulate You [INFOGRAPHIC] In this post-truth era, graphs are being used to skew data and spin narrative like never before. NAPLAN results delayed over concerns national data could be invalid. Updated 38 minutes agoWed 8 Aug 2018, 1:25am The NAPLAN results for more than 1 million children have been caught up in controversy as education heads raise the alarm that it may not be possible to compare scores across the country. 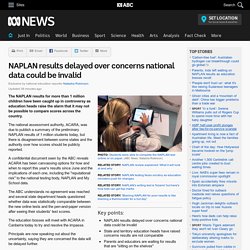 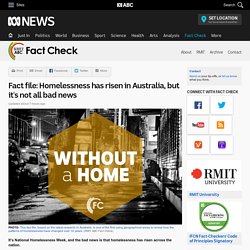 The number of homeless people across Australia has risen 14 per cent since 2011 to 116,400, according to a new interactive analysis of homelessness data by RMIT ABC Fact Check. And the increase can't be attributed to population growth alone — the rate of homelessness increased from 47.6 per 10,000 Australians in 2011 to 49.8 in 2016. War on Waste: Do we really use 10 million straws a day? We don't know, but it's time to count - Science News - ABC News. Have you heard this statistic? Australians use an estimated 10 million plastic straws a day. Chart of the day: Nearly half of selfie-related deaths are caused by drowning. Updated yesterday at 3:15amMon 30 Jul 2018, 3:15am A US man died last week after slipping off a cliff while taking selfies at a whale-watching site in Sydney's south. Sadly, he's far from alone. According to Turkish clinicians who tallied up selfie-related incidents reported in the media from December 2013 to January 2017, most injuries resulted from falling, but the leading cause of death was drowning.

In more unusual cases, a Russian man died after posing with a grenade, and in 2016 a tourist in China was dragged underwater by a walrus while he was snapping a selfie with the massive marine mammal. No wonder some countries run "safer selfie" campaigns. What should I read next? Chart of the day: The Government hasn't been very good at predicting population growth. Posted Tue at 1:43amTue 17 Jul 2018, 1:43am Australia's population growth has outstripped official expectations for more than a decade, according to the Government's own estimates. The Intergenerational Report provides "a projection into the future, giving us an estimate of the challenges we face as a nation".

But across the four reports stretching back to 2002, the Government has repeatedly underestimated how fast the population is growing. In 2002, the first report assumed net overseas migration would continue at 90,000 people per year. Subsequent reports have increased this migration figure, but they have still underestimated growth. Worldometers - real time world statistics. Public Profiler. Gapminder: Unveiling the beauty of statistics for a fact based world view. Real time world statistics.