How to Reverse Engineer a Chip. Have you ever wondered how you could look at a chip and map out its schematic? 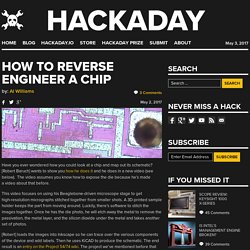 [Robert Baruch] wants to show you how he does it and he does in a new video (see below). The video assumes you know how to expose the die because he’s made a video about that before. This video focuses on using his Beaglebone-driven microscope stage to get high-resolution micrographs stitched together from smaller shots. A 3D-printed sample holder keeps the part from moving around. Luckily, there’s software to stitch the images together. [Robert] loads the images into Inkscape so he can trace over the various components of the device and add labels. If you want to duplicate his efforts, be warned that you need some fairly nasty chemicals, so be careful. A 74LS01–the subject of the video–only has 8 transistors. Ten email commandments. There have never been so many ways to get things done – or so many distractions. 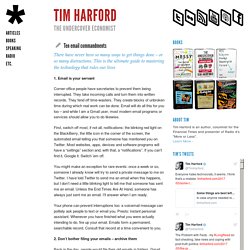 This is the ultimate guide to mastering the technology that rules our lives 1. Xdotool: Script your mouse. Back in the day, we were all told that computers would make our lives easier. 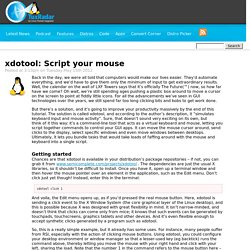 They’d automate everything, and we’d have to give them only the minimum of input to get extraordinary results. Learn Ethical Hacking From Scratch. This course was last updated on 01/01/2017 Welcome to my comprehensive course on Ethical Hacking! 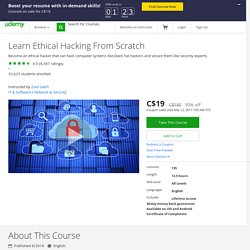 In this course, you will start as a beginner with no previous knowledge about penetration testing or hacking. The first thing you will learn is some basic information about ethical hacking and the different fields in penetration testing. This course is focused on the practical side of penetration testing without neglecting the theory behind each attack. An R function to map your Twitter Followers · Simply Statistics. 21 Dec 2011 Share this on → Twitter | Facebook | Google+ I wrote a little function to make a personalized map of who follows you or who you follow on Twitter. 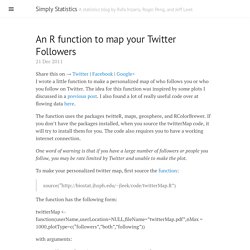 The idea for this function was inspired by some plots I discussed in a previous post. I also found a lot of really useful code over at flowing data here. The function uses the packages twitteR, maps, geosphere, and RColorBrewer. One word of warning is that if you have a large number of followers or people you follow, you may be rate limited by Twitter and unable to make the plot. To make your personalized twitter map, first source the function: Quick Start. This instruction assumes that PhantomJS is installed and its executable is placed somewhere in the PATH. 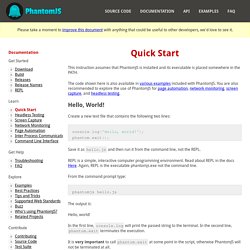 The code shown here is also available in various examples included with PhantomJS. You are also recommended to explore the use of PhantomJS for page automation, network monitoring, screen capture, and headless testing. Hello, World! Create a new text file that contains the following two lines: console.log('Hello, world! ') Save it as hello.js and then run it from the command line, not the REPL. REPL is a simple, interactive computer programming environment. 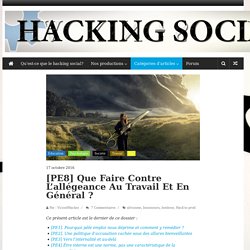 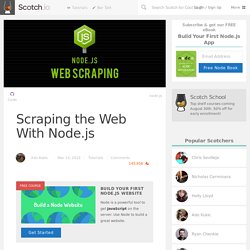 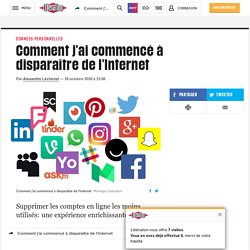 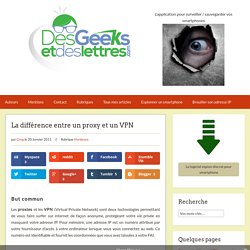 Fully parameterised to customise for different wheels and shafts. $10 USB charger can record your keystrokes wirelessly. Late last month, the FBI issued a public alert regarding KeySweeper — an Arduino-based keylogger for Microsoft wireless keyboards (which use a proprietary 2.4GHz RF protocol) that is cleverly camouflaged as a functioning USB wall charger.

The brainchild of Samy Kamkar, the stealthy device can sniff, decrypt, log and report back all keystrokes. Web Scraping with Beautifulsoup – Emacs, Arduino, Raspberry Pi, Linux and Programming etc. Following script is adapted from somewhere which I could not seem to recall the origin. #! /bin/python import os import urllib.request from bs4 import BeautifulSoup #open file to write data f=open('/home/tan/proj/bs4/university-list.txt','w') url=" page = urllib.request.urlopen(url) soup = BeautifulSoup(page,"lxml") #print the list the html file #print(soup.prettify()) count=0 universities=soup.find_all('a',class_='institution') for university in universities: url=university['href'] list=(university.string+"\t"+url) f.write(list+'\n') count+=1 # print the # of universities print("The Total Number of Universites in US is",count, ".

Hacking the Internet of Things: Decoding LoRa. Getting software-defined radio (SDR) tools into the hands of the community has been great for the development and decoding of previously-cryptic, if not encrypted, radio signals the world over. As soon as there’s a new protocol or modulation method, it’s in everyone’s sights. A lot of people have been working on LoRa, and [bertrik] at RevSpace in The Hague has done some work of his own, and put together an amazing summary of the state of the art. TP-LINK’s WiFi Defaults to Worst Unique Passwords Ever. This “security” is so outrageous we had to look for hidden cameras to make sure we’re not being pranked. We don’t want to ruin the face-palming realization for you, so before clicking past the break look closely at the image above and see if you can spot the exploit.

HN44S812emeeditionMars2007. Point the Way to the ISS with This DIY Orbit Tracker. Given the International Space Station’s host of superlatives (i.e. most expensive man made structure, largest artificial body in Earth’s orbit, longest functioning habitable satellite, greatest engineering accomplishment of all time, coolest flying space laboratory, etc.), you’d think that it would be on our minds constantly. Yet many of us go hours, even days, without thinking about it once. There’s a growing movement of people who believe that our space agencies are underfunded because humanity is just not paying enough attention to our present accomplishments and future plans in space exploration. Well, I know one way to direct attention to something. Point at it. This is the first prototype of the International Space Station Orbit Tracking Pointer. Embedding PCBs In 3D Prints. The folks over at Lunchbox Electronics are working on a very cool prototype: embedding LEDs inside standard 1×1 Lego bricks.

Being a prototype, they needed a cheap way to produce Lego bricks stuffed with electronics. It turns out a normal 3D printer has okay-enough resolution, but how to put the electronics in the bricks? Gcode wizardry, of course. The electronics being stuffed into the bricks isn’t much – just a small PCB with an LED. It does, however, need to get inside the brick. “Bricking” Microcontrollers in LEGO Motivates Young Programmers. ArduinoConnectionCode - hack-a-robosapien - We use Arduino board to send commands to Robosapien - A project of Neuron hackspace on adding extra features to WowWee RoboSapien. Hack de mon RobotSapien ( seb03000 ) Two Hacked Robosapien Toys Autonomously Sumo Wrestle. OBD-Pi : Software Installation. Before you start you will need a working install of Raspbian with network access. We'll be doing this from a console cable connection, but you can just as easily do it from the direct HDMI/TV console or by SSH'ing in. Whatever gets you to a shell will work!

Note: For the following command line instructions, do not type the '#', that is only to indicate that it is a command to enter. Before proceeding, run: # sudo apt-get update # sudo apt-get upgrade # sudo apt-get autoremove # sudo reboot Install these components using the command: Part 1: Hacking a Tyco (tm) "Rebound" for robot use in 30min. The chassis of the "Rebound" is perfect for small off road robots. The PCB has a radio receiver and dual "H" bridge. This walkthrough shows you how to make the chassis and PCB microcontroller friendly in 30min. MITIC & Education. Let's make a Mini Robot. How to make a walking robot at home. 1-Hour Quadcopter Build. A Raspberry Pi Garage Door Opener. We can never seem to get enough garage door hacks around here. [Tanner’s] project is the most recent entry into this category. Using MATLAB and SDR to Reverse Engineer 433MHz Messages. Hackers everywhere are having a lot of fun with SDR – as is obvious from the amount of related posts here on Hackaday.