Making an Audio Mixer: 20 Steps (with Pictures) Typically enclosures are made as after thoughts for electronics projects. 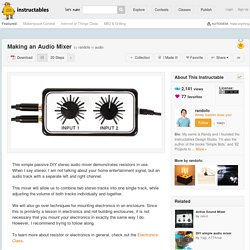 In most of these projects throughout this class we will be starting with the enclosure. Not only that, I am going to show you how to build them well. There will be no soap dishes with wires sticking out of them in this class. If you want to ignore my methodology and go your own way, that is your business. However, I intend to show you how to do it correctly. First of all, aesthetics are important and you should always make things that look reasonably good. Secondly, understanding the constraints of the enclosure means that you have clearly planned ahead and know what needs to get done. Cheapest Smart Home for $38: 8 Steps (with Pictures) The Raspberry Pi Zero W does not have a header integrated but it’s very easy to add one (and you can buy it for less than $2 on Amazon). 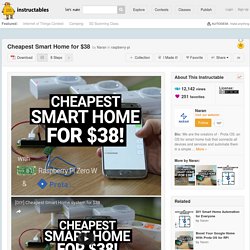 You can solder it very easily in a minute. Camera Storage Backpack. I got my hands on a free promotional backpack and needed camera storage, so this happened. 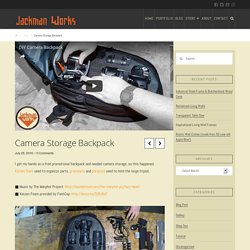 Kaizen foam used to organize parts, grommets and paracord used to hold the large tripod. ■ Music by The Marphoi Project: ■ Kaizen Foam provided by FastCap: I start with the freebie backpack and cut the gasket things that keep the flap from opening all the way because, well, I want it to open all the way. The backpack is turned inside out so I’m able to get the exact shape of the inside of the bag. I use a piece of cardboard and trace the backpack on it. Camera Remote Footpedal: 7 Steps (with Pictures) Turn Nearly Anything Into a Speaker: 13 Steps (with Pictures) Insert the jacks into the mounting holes in the enclosure. 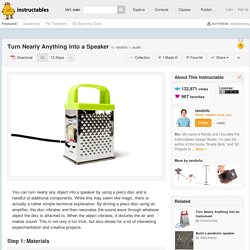 Make note of which jack is connected to the side of the transformer labeled "P". This stands for primary. Typically the primary is the input side, but we are actually driving the transformer backwards, so the primary side is our output to the piezo. The reason the input is the output is because of impedance, a concept we are not really covering in this class, but one particularly important when dealing with transformers and AC electronics. Long story short, impedance is kind of like resistance in AC electronics (but not exactly the same). Precision Soldering for Mortals!: 6 Steps (with Pictures) Use a DIY Proximity Sensor to Automate Your Haunted House: 6 Steps (with Pictures) In most cases you will use a microcontroller such as an Arduino to monitor the signal from the sensor. 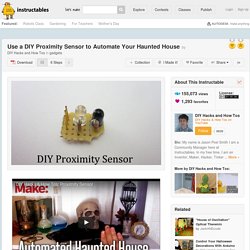 Pigeon: a 3D Printed Cloud Camera That Uses the New Raspberry Pi Zero W - All. After the installation is completed, you will be able to watch the camera live feed by accessing: If you want to setup remote access, make sure to setup port forwarding in your modem admin panel (port 8099 to your Raspberry IP.) 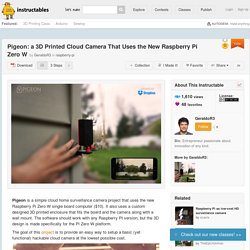 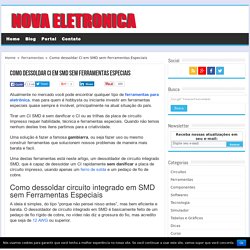 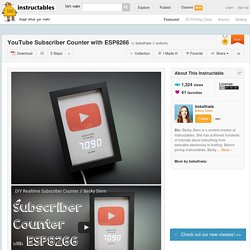 Before you dive into the code for this project, you should first make sure you've got your Arduino software set up properly to program the board you are using, which in my case involves installing the SiLabs USB driver and installing ESP8266 board support (explained in more detail in the Feather Huzzah tutorial): 5 Ways to Remove a Stripped Screw. Build a Raspberry Pi-Based Cable Shutter Release for Sony Cameras.

Replacing a simple and inexpensive remote cable release for your camera with Raspberry Pi may seem like a classic case of over-engineering, but using the tiny machine to control the camera opens up a whole new world of photographic opportunities. 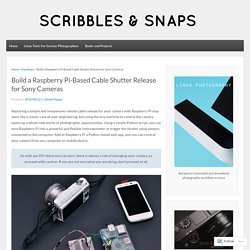 Using a simple Python script, you can turn Raspberry Pi into a powerful and flexible intervalometer or trigger the shutter using sensors connected to the computer. Add to Raspberry Pi a Python-based web app, and you can control your camera from any computer or mobile device. As with any DIY electronics project, there is always a risk of damaging your camera, so proceed with caution. Easy Waterproof Clothing. 3D Printed Digital Night Vision (The OpenScope) I love light, physics, optics, and electronics. 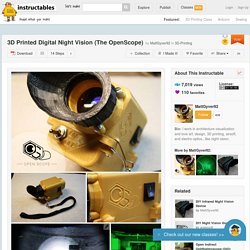 Atom Icon by okazu - Dribbble. CNC Made From Garbage - All. Canadians produces 725 tonnes of e-waste annually. After seeing all of the electronics thrown away at my school, I am not surprised by this statistic. I believe that most thrown away electronics have a lot of hidden use. I wanted to prove this by building a machine entirely out of garbage. After looking at the electronics that I hoarded...ahem...I mean collected, I realised I could build a CNC machine.

That's right, all of the components used in this project were thrown away. How-to make a ‘usb battery’ Found out yesterday that there’s a shuffle shortage and gadget battery life can only be expected to get worse. bummer. at least you can make the most of your waiting-for-shuffle blues and solder yourself a ‘usb battery’. this little gizmo runs off a 9 volt battery and supplies your favorite little device with the proper 5 volts of mobile power. in lieu of running an ipod off of it, i tested it with an mpx220 smartphone and it should work fine with any low power mobile device that can charge via usb cable. read more for instructions on how to make your own. here’s what you need to scrounge up: 5.1v zener diode.100ohm or slightly greater resistor. all i had was a 330ohm which works. don’t try anything lower than 100ohm.9v battery connector and 9v battery.flat female usb connector that mates with your device’s usb cable. this is the hardest part to find. i tore mine off an old usb extension cable. wire it up test it try it finish the job.

42 of the Most Useful Raspberry Pi Commands. Sometimes it’s difficult to keep track of all the useful Raspberry Pi commands you use, so I created a list of some of the most common and important ones that will make using Linux on the Raspberry Pi a lot easier. There are two user “modes” you can work with in Linux. One is a user mode with basic access privileges, and the other is a mode with administrator access privileges (AKA super user, or root). Some tasks cannot be performed with basic privileges and you will need to enter into root mode to perform them. You will frequently see the prefix sudo before commands, which means that you are telling the computer to operate the command with super user privileges.

PlexiClock. First, I hope you will have a lot offun with the following instruction! I also want to thank every author of the instructions which I used to manage this! I apologize for not being word-perfect in English and if you have any question, don’t hesitate to contact me! Before you begin to work, make sure you have all the parts together. You see all of the parts which I used in the first picture and there is a list with all of the parts following. I also included some links where you can purchase the parts and some other tutorials regarding each used circuit board. How to make an EMP Jammer.

Using an Infrared Library on Arduino. IRLib not only receives and decodes IR signals but it can transmit them as well using an IR LED and a driver circuit. The library has been used to control TVs, cable boxes, DVDs, VCRs, and IR controlled toys such as helicopters and dinosaur robots. It could also be used to control some home automation devices. Some users have attempted to control air conditioners and fans however protocols used for air-conditioners are extremely difficult to implement and we have not directly supported such protocols because they are very rare. Typically the output pin of an Arduino cannot supply sufficient current to drive and IR LED so you will want to implement a simple driver circuit using NPN transistor and a 470 ohm resistor is shown here: Make sure that you get the polarity of the LED correct. More advanced driver circuit schematics are available in the IRLib manual in section 1.4 Hardware Considerations. The default timer is TIMER2 on the Arduino Uno and Arduino Mega.

DVD to Laser Engraver. Scan Photo With Your Mobile Phone. Arduino Data Glasses For My Multimeter. Create a Joystick Using the Arduino Joystick Library 2.0. MANUAL DE PROGRAMACIÓN DE ARDUINO. 10 Free eBooks On Circuits - Electronics For You. From understanding basic circuits to creating complex circuits, from analog to digital circuits, from designing circuits on PCs to circuits analysis, these free ebooks on electronics carries everything that you ever wanted to learn about circuits.

Enjoy! Atithya Amaresh Author: Forrest M. Mims III Publisher: Radio Shack, 1993 This book carries various standard application circuits and circuits that are designed and created by the author. 2. Make Your Own Custom Shortcut Buttons With an Arduino. Battery powered fog machine - All. How I built a keyboard by hand – Jack Lewis – Blog. I had spare mechanical keyboard switches and keycaps from other keyboard projects, and I wanted to see if it would be feasible to build a keyboard using only hand tools.

I started with some aluminum sheet stock from the hardware store. It was perfectly sized to build a 5 column, 13 row grid keyboard, without any wasted space. I started by laying out where the switch holes would be cut. Disassembling a CD/DVD reader and reusing its parts. Top 5 Android apps for Electronics Engineers. There are more than 2.2 million apps available on Google Play Store (as of 2016) . With around 2000 apps for electronics engineers or hobbyists it can be a bit confusing to decide which apps you need. Four ways to power up the Arduino Uno.

Laser Etching Glass. This tutorial tracks my process of using various software programs and a laser etching machine, glass acid etch and glue with a base plate of LEDs to make the glass sculpture. The sheets of 6mm float glass has been hand cut and laser etched twice (both sides) to preserve the resolution of the data. Below is a glass cutting video, showing the technique of hand cutting. The final size of the glass work is 300mm w X 600mm h x 258mm d - weighing about 70kg. How to : Control Speed of Motor? Salvaging Liquid Crystal Displays (LCDs) Pole-Mounted Mason Jar Garden Lights. For each light, you'll need the following: 1/2" diameter conduit cut to your desired length. Cheap precision drill stand - All.

Which Programming Languages Can You Use With Arduino? Make: DIY Projects and Ideas for Makers. $2 Arduino. The ATMEGA328 as a stand-alone. Easy, cheap and very small. A complete guide. - All. How to Open a Lock With a Coke Can - All. Make your own 3d hologram projector using CD case & smartphone. Dot Matrix Business Card - All. Basics of Opamp circuits - a tutorial on how to understand most opamp circuits - Electronics-Lab. A minimalist solution to make VR panorama - All. MDI Project Wiki - MDI Project Wiki. Introduction to hobbyist Lock picking Aka: LockSport - All. Cable Chick's Cable & Connector Guide. Understanding TRRS and Audio Jacks - Cable Chick Blog. Learn Electronics and Arduino Just By Watching These Videos. Electronics made easy.