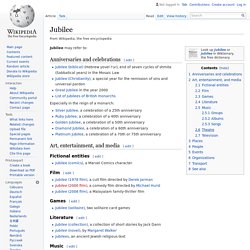 Book of Proverbs. The Book of Proverbs (Hebrew מִשְלֵי, Míshlê (Shlomoh), "Proverbs (of Solomon)"), is the second book of the third section (called Writings) of the Hebrew Bible. 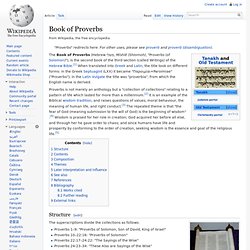 When translated into Greek and Latin, the title took on different forms: in the Greek Septuagint (LXX) it became "Παροιμίαι=Paroimiae" ("Proverbs"); in the Latin Vulgate the title was "proverbia", from which the English name is derived. Proverbs is not merely an anthology but a "collection of collections" relating to a pattern of life which lasted for more than a millennium. It is an example of the Biblical wisdom tradition, and raises questions of values, moral behaviour, the meaning of human life, and right conduct. 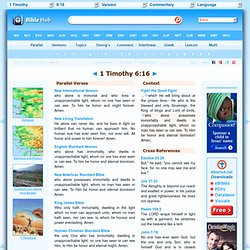 To him be honor and might forever. Amen. New Living TranslationHe alone can never die, and he lives in light so brilliant that no human can approach him. No human eye has ever seen him, nor ever will. All honor and power to him forever! English Standard Versionwho alone has immortality, who dwells in unapproachable light, whom no one has ever seen or can see. New American Standard Bible who alone possesses immortality and dwells in unapproachable light, whom no man has seen or can see.

King James BibleWho only hath immortality, dwelling in the light which no man can approach unto; whom no man hath seen, nor can see: to whom be honour and power everlasting. Holman Christian Standard Biblethe only One who has immortality, dwelling in unapproachable light; no one has seen or can see Him, to Him be honor and eternal might. Pulpit Commentary Who only hath immortality,.... Maimonides. Mosheh ben Maimon (משה בן מימון), called Moses Maimonides (/maɪˈmɒnɪdiːz/ my-MON-i-deez) and also known as Mūsā ibn Maymūn (Arabic: موسى بن ميمون‎), or RaMBaM (רמב"ם – Hebrew acronym for "Rabbeinu Mosheh Ben Maimon" – English translation: "Our Rabbi/Teacher Moses Son [of] Maimon"), was a preeminent medieval Arab, Spanish, Sephardic Jewish philosopher, astronomer[5] and one of the most prolific and influential Torah scholars and physicians[6][7][8] of the Middle Ages. 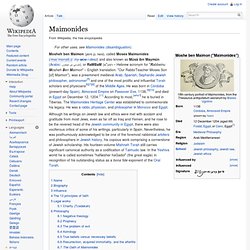 He was born in Córdoba (present-day Spain), Almoravid Empire on Passover Eve, 1138,[9][10] and died in Egypt on December 12, 1204.[11] According to most,[who?] He is buried in Tiberias. The Maimonides Heritage Center was established to commemorate his legacy. He was a rabbi, physician, and philosopher in Morocco and Egypt. Merkabah mysticism. Etymology[edit] The noun merkabah "thing to ride in, cart" is derived from the consonantal root r-k-b with the general meaning "to ride". 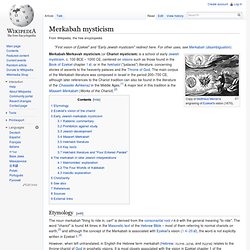 The word "chariot" is found 44 times in the Masoretic text of the Hebrew Bible – most of them referring to normal chariots on earth,[3] and although the concept of the Merkabah is associated with Ezekiel's vision (1:4–26), the word is not explicitly written in Ezekiel 1.[4] Ezekiel's vision of the chariot[edit] Ezekiel's Wheel in St. John the Baptist Church in Kratovo, Macedonia. According to the verses in Ezekiel and its attendant commentaries, his vision consists of a chariot made of many heavenly beings driven by the "Likeness of a Man. " The Bible later makes mention of a third type of angel found in the Merkabah called "Seraphim" (lit.