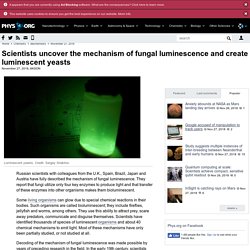 They report that fungi utilize only four key enzymes to produce light and that transfer of these enzymes into other organisms makes them bioluminescent. Some living organisms can glow due to special chemical reactions in their bodies. Such organisms are called bioluminescent; they include fireflies, jellyfish and worms, among others. They use this ability to attract prey, scare away predators, communicate and disguise themselves. Scientists have identified thousands of species of luminescent organisms and about 40 chemical mechanisms to emit light. 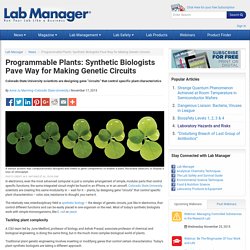 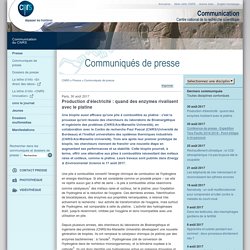 Depuis plusieurs années, des chercheurs du laboratoire de Bioénergétique et ingénierie des protéines (CNRS/Aix-Marseille Université) développent une nouvelle génération de biopiles. Scientists Hacked a Cell's DNA and Made a Biocomputer Out of It. Our brains are often compared to computers, but in truth, the billions of cells in our bodies may be a better analogy. 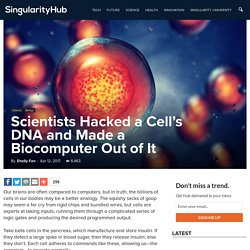 The squishy sacks of goop may seem a far cry from rigid chips and bundled wires, but cells are experts at taking inputs, running them through a complicated series of logic gates and producing the desired programmed output. Take beta cells in the pancreas, which manufacture and store insulin. Meet the Revolutionary Apple That Grows Human Skin. What’s In An Apple? 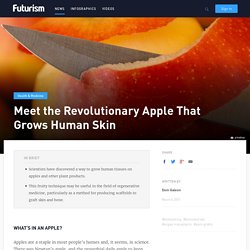 Apples are a staple in most people’s homes and, it seems, in science. There was Newton’s apple, and the proverbial daily apple to keep your doctor away. Now, biophysicist Andrew Pelling of University of Ottawa wants to add an apple of his own into the mix — and this one might bring with it the future of biomaterials and human tissue repair. Many scientists thought the idea of this apple itself was a little fruity. Pelling said that his team did not have many cheerleaders when they started to look for ways to grow human cells by biohacking fruits. “Nobody else is doing this. How Pelling’s team achieved this was rather simple, he said. Synthetic Cells Have Passed A Turing Test. Fake It ‘Til You Make It Amid rapid advances in artificial intelligence (AI), humans use the Turing test to determine if a machine is truly intelligent. 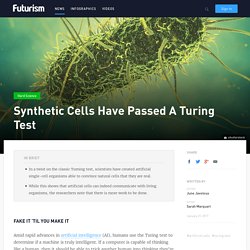 If a computer is capable of thinking like a human, then it should be able to trick another human into thinking they’re having a real conversation with a person instead of a machine. In a twist on the classic test, scientists created artificial single-cell organisms able to convince natural cells that they are real. Programming Language Automates Generation of Plug-and-Play DNA. From the synthetic biologist’s point of view, living cells are biological computers, and the ultimate code isn’t binary, but tertiary, a stream of A’s, T’s, C’s, and G’s. 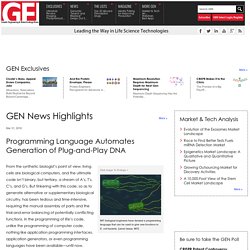 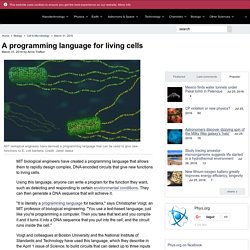 Using this language, anyone can write a program for the function they want, such as detecting and responding to certain environmental conditions. They can then generate a DNA sequence that will achieve it. "It is literally a programming language for bacteria," says Christopher Voigt, an MIT professor of biological engineering. Goksel MISIRLI - Computational Design of Biological Systems. Synthetic Biology Comes into Its Own. Every two hours in Matthew Bennett’s Rice University lab, cyan and yellow lights flashed in synchronization. 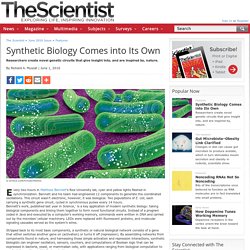 Bennett and his team had engineered 12 components to generate the coordinated oscillations. This circuit wasn’t electronic, however; it was biological. Two populations of E. coli, each carrying a synthetic gene circuit, cycled in synchronous pulses every 14 hours. Bennett’s work, published last year in Science,1 is a key application of modern synthetic biology: taking biological components and linking them together to form novel functional circuits. 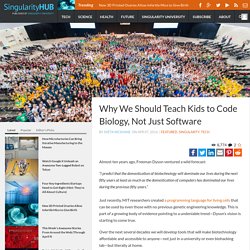 Just recently, MIT researchers created a programming language for living cells that can be used by even those with no previous genetic engineering knowledge. Scientists have taken a huge leap toward creating artificial life. Even high-flying technology companies cannot avoid geopolitical risks. This was proved by Apple’s recent (and apparently unanticipated) run-in with Chinese authorities—including the sudden shutdown of iTunes Movies and iBooks in China. No matter how popular their products or how “borderless” their services, technology’s brave new world will increasingly clash with the older realm of borders and governments. As a result, both financial and physical costs will increase for tech companies and their customers. Programmable Plants: Synthetic Biologists Pave Way for Making Genetic Circuits.

A sensor protein was computationally designed and linked to gene components to enable a plant, Nicotiana tabacum, to display a loss of chlorophyll.Photo Credit: M.S. Antunes et al., PLOS ONEIn electronics, even the most advanced computer is just a complex arrangement of simple, modular parts that control specific functions; the same integrated circuit might be found in an iPhone, or in an aircraft. Colorado State University scientists are creating this same modularity in – wait for it – plants, by designing gene “circuits” that control specific plant characteristics – color, size, resistance to drought, you name it. The relatively new, interdisciplinary field is synthetic biology – the design of genetic circuits, just like in electronics, that control different functions and can be easily placed in one organism or the next. Most of today’s synthetic biologists work with simple microorganisms, like E. coli or yeast. Amino: Desktop Bioengineering for Everyone.

Gene Editing Is Now Cheap and Easy—and No One Is Prepared for the Consequences. In April 2015, a paper by Chinese scientists about their attempts to edit the DNA of a human embryo rocked the scientific world and set off a furious debate. Leading scientists warned that altering the human germ line without studying the consequences could have horrific consequences. Geneticists with good intentions could mistakenly engineer changes in DNA that generate dangerous mutations and cause painful deaths. DARPA Wants to Genetically Engineer Organisms to Terraform Mars. There has been a lot of buzz in recent years about the possibility of mankind's big move to our nearest neighbor, Mars. Moving our species to the Red Planet also implies that we will be shipping over microorganisms, plants and maybe even animals. Review: the Emerging Field of Bioluminescence - Labiotech.eu.

Thanks to the synthetic biology revolution, bioluminescence is now moving from a curious natural trait to an interesting research field that could soon arrive to the market. Bioluminescence’s impulsors aim at replacing electric lighting. Sounds good, but which are the most advanced projects right now? Will bioluminescence really have an impact on the lighting market and when? Bioluminescence, the production and emission of light by a living organism, occurs widely in nature. This natural property was first observed hundreds of years ago. The Synthetic Biology Open Language (SBOL) Scientists Design Biological Safety Switch For GMOs. In a bid to reduce the risk of genetically modified organisms escaping into the environment and disturbing natural ecosystems, two groups of scientists in the U.S. have rewritten the genetic code of bacteria to produce strains that are totally dependent on unnatural substances to grow.

Not only do these organisms die without their synthetic food, but they are also resistant to viruses and unable to exchange their engineered DNA with natural counterparts. Although the techniques have only been used on bacteria so far, the researchers believe it may be possible to extend them for more complex organisms, such as plants. Synthetic biology - what should we be vibrating about?: Drew Endy at TEDxStanford. Custom Creatures? Animals Fight Bacteria Using Stolen Defense Systems. Two young scientists break down plastics with bacteria. News Highlights:Bacterial Computer’s Analog Memory Stores Environmental Data in DNA. Treating the genome as so much living circuitry, synthetic biologists hope to create designer cells, even “computerized” cells. News Highlights:To Boldly Go Where No Biomanufacturing Has Gone Before. Scientists Make DNA Wires That Carry Electric Current. Precise and programmable biological circuits. Programming Nature - Entrepreneurs are Transforming Synthetic Biology into Real Dollars.