Vitamindrip by B21 Branding Studio, via Behance. Grayden Poper – Interactive Designer. Carefully Crafted UI Design Assets. Full-view.png by Creativedash. Creativedash. The Graphics Were the Best Part of the Oscars - Bloomberg Business. As speculation swirled Sunday night around who would win Best Actress and Best Actor and which film would come out on top, design-minded viewers had another red hot question. 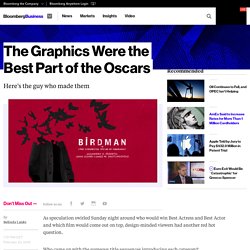 Who came up with the gorgeous title sequences introducing each category? It was Henry Hobson, a British-born, L.A. –based film director and graphic designer, with the help of the California animation studio Elastic and show co-producer Lee Lodge. This is just one of 23 sequences Hobson whipped up for the Academy Awards, every one taking a singular approach to its theme: For the production design category, Hobson arranged and photographed the recognizable props associated with each nominated film. Hobson, 33, has been involved with the Oscars for seven years, in one way or another, gradually pushing the look and feel of the title sequences in a contemporary direction and away from the use of stitched-together film clips. 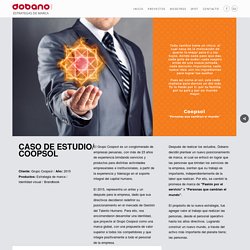 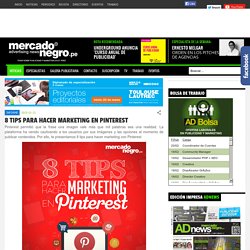 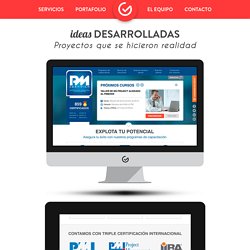 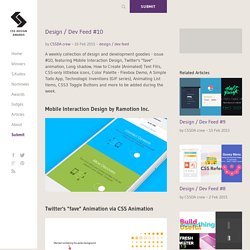 How to test the usability of prototypes like a pro. Usability isn’t something you just can cook up in any one phase of design, but must be developed and refined throughout the entire process. 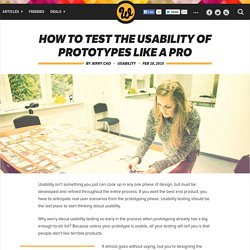 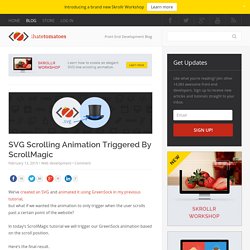 In today’s ScrollMagic tutorial we will trigger our GreenSock animation based on the scroll position. Here’s the final result. 1. Include ScrollMagic Firstly we will include ScrollMagic in the html, just after the TweenMax.min.js reference. I pasted the smaller version of ScrollMagic into my plugins.js. 2. How to Create a Coding Page Illustration in Adobe Illustrator. With all the flat style madness going on in the design community, we can quickly see how this is the direction of the future. 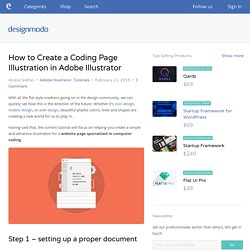 Whether it’s icon design, mobile design, or web design, beautiful playful colors, lines and shapes are creating a new world for us to play in. Having said that, the current tutorial will focus on helping you create a simple and attractive illustration for a website page specialized in computer coding. Step 1 – setting up a proper document. UI/UX Works by Julien Renvoye. PageSpeed Insights. StoriesOnBoard - The User Story Mapping Tool. Shorten - Bitly. The Design Sprint — Google Ventures.

The sprint gives teams a shortcut to learning without building and launching. 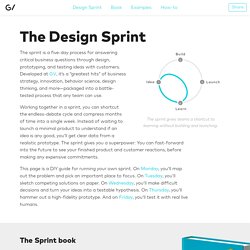 The sprint is a five-day process for answering critical business questions through design, prototyping, and testing ideas with customers. Developed at GV, it’s a “greatest hits” of business strategy, innovation, behavior science, design thinking, and more—packaged into a battle-tested process that any team can use. Working together in a sprint, you can shortcut the endless-debate cycle and compress months of time into a single week. Instead of waiting to launch a minimal product to understand if an idea is any good, you’ll get clear data from a realistic prototype. A Lightning-Fast Way To Make A Digital Prototype. [Editor’s note: This is the sixth in a series of seven posts on running your own Google Ventures design sprint. 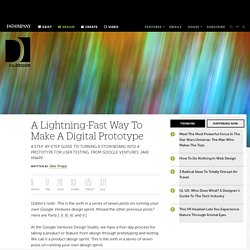 Free High-Resolution Photos. Jessica Walsh on Behance. Jessica Walsh / Influence #1 - Guillaume Galante Blog. Influence #1 / Jessica Walsh Every week in « Influence » I choose an artist who inspires me in my daily life. In those posts, I will present you some of the best artists around the world. Behind those posts, you’ll know which artist influence my personal and professional projects. It’s important to take a look to other people work to think further for your projects. I will try to make one post every week. PI-AR - Home. IAB. Stylus — expressive, robust, feature-rich CSS preprocessor. One Page Love. Is Your Creative Vision Shortchanging UX? When approaching a design challenge, it is easy to get caught up in the aesthetics.

After all, for the skilled designer, selecting a unique font, minimizing clutter, and generally showing off good taste and artistic ability are part of the fun. Putting that personal spin on a project is part of what makes it worthwhile. Nobody is going to complain that the end result looks too nice. More likely, they will complain that the exquisite design comes at the expense of the user experience. Just because “end user” has the word ‘end’ in it doesn’t mean the user’s concerns should only be considered toward the end of the project—in fact, user experience should be the central concern for any designer who wants to work again. Image Source: Website Wireframes via Shutterstock. Inspirational Examples of UI Style Guides. According to Wikipedia, a UI style guide is a ‘set of standards for the writing and design of documents’ and that it ‘ensures consistency and enforces best practice in usage.’

All very true. But what it neglects to mention is how inspiring UI style guides can be just to look at and get lost in. In much the same way as we found wireframe sketching and brand identities incredibly inspirational, web UI style guides have the same effect. Covers - A JS / CSS Experiment. How To Use Animate.css. In a recent battle with the “Just-add-water CSS Animations” plugin, Animate.css, I was a little distressed to find no documentation on the site. It got to the point where I was flipping through multiple Google searches just looking for something basic. With that in mind, I thought we’d just start the process here to get you started using the Animate.css plugin. Step 1: Download/Upload the plugin This one is pretty simple. Click on the “Download on Github” link on the page, or click this link to visit the animate.css github page. After clicking animate.css you’ll be taken to another GitHub page with options along the top.

Obviously save the file to someplace on your computer that you’ll actually be able to find it again. Step 2: Add the Plugin To Your Pages Same as you would load in any kind of file (css, js, etc.), we’re going to need to place a call to the file within the head of your HTML page (or your header.php include). Webdesign-Inspiration.com: Best web designs inspiration gallery. Infographic: Pros & cons of infinite scrolling. Iconset:20-flat-icons icons - Download 20 free & premium icons on Iconfinder. How to profit from UX design.

Our users are the lifeblood of the products and services we make. We take their needs, desires, and actions into consideration for even the smallest of design decisions. Serious time and resources are spent during weeks, or even months, of design direction for these users, but is it really worth it in the end ? Absolutely. Not only does user experience design give us an increased understanding of our users’ desires, but it’s also very easily quantifiable in terms of analytical — and sometimes monetary — value. Free ebook: The Guide to Mockups. While wireframes help explore concepts, mockups are realistic representations of the final website or app.

Listed as a top 10 design tool for 2015 by net magazine for its wireframing and prototyping power, our friends at UXPin wrote this ebook to thoroughly define the anatomy, purpose, and different methodologies of creating mockups. The Guide to Mockups by UXPin includes five chapters of visual best practices, explorations of fidelity, and distilled advice based on years of experience as a wireframing and prototyping app.

Given the changes to the design process in recent years, this book will help you better understand how and when to use wireframes, mockups, prototypes. It's not about low or high fidelity, but about choosing the right fidelity for the job. DOSER DA2C on Behance. UX UI design Infographics - by UXPin on Pinterest. Iconset:20-flat-icons icons - Download 20 free & premium icons on Iconfinder. 10 web design trends you’ll actually see in 2015 (and how to survive them) This time last year I made 7 predictions for web design in 2014, with mixed results (I’m looking at you SVG).