Git - the simple guide. Git - the simple guide just a simple guide for getting started with git. no deep shit ;) by Roger Dudler credits to @tfnico, @fhd and Namics this guide in deutsch, español, français, indonesian, italiano, nederlands, polski, português, русский, türkçe, မြန်မာ, 日本語, 中文, 한국어 Vietnamese please report issues on github setup Download git for OSX Download git for Windows Download git for Linux create a new repository create a new directory, open it and perform a git init to create a new git repository. checkout a repository create a working copy of a local repository by running the command git clone /path/to/repository when using a remote server, your command will be git clone username@host:/path/to/repository workflow your local repository consists of three "trees" maintained by git. the first one is your Working Directory which holds the actual files. the second one is the Index which acts as a staging area and finally the HEAD which points to the last commit you've made. add & commit pushing changes. 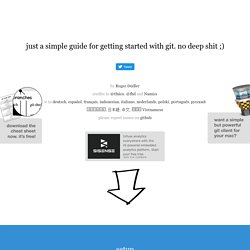 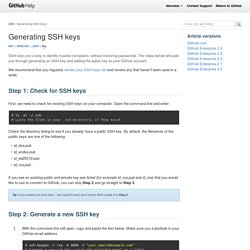 The steps below will walk you through generating an SSH key and adding the public key to your GitHub account. We recommend that you regularly review your SSH keys list and revoke any that haven't been used in a while. Tip: GitHub has a desktop client! You can use it without ever touching the command line. Tip: If you have GitHub for Windows installed, you can use it to clone repositories and not deal with SSH keys. Step 1: Check for SSH keys First, we need to check for existing SSH keys on your computer. Ls -al ~/.ssh# Lists the files in your .ssh directory, if they exist Check the directory listing to see if you already have a public SSH key. Id_dsa.pubid_ecdsa.pubid_ed25519.pubid_rsa.pub If you see an existing public and private key pair listed (for example id_rsa.pub and id_rsa) that you would like to use to connect to GitHub, you can skip Step 2 and go straight to Step 3. Installing Jekyll on Windows 8 (64-bit) This is my working formula for getting the Jekyll ruby gem up and running on Windows 8 (64-bit). 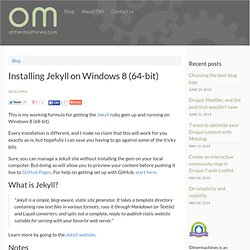 Every installation is different, and I make no claim that this will work for you exactly as-is, but hopefully I can save you having to go against some of the tricky bits. Sure, you can manage a Jekyll site without installing the gem on your local computer. But doing so will allow you to preview your content before pushing it live to GitHub Pages. For help on getting set up with GitHub, start here. What is Jekyll? "Jekyll is a simple, blog-aware, static site generator. Learn more by going to the Jekyll website. Notes A couple of notes before we begin: I tried Ruby 2.0 (64-bit and 32-bit) with no success. Steps Download: Python 2.7.5 Windows Installer Installs a Python interpreter on Windows. Troubleshooting.

How to Run Jekyll on Windows. Blog with Knitr and Jekyll. The knitr package provides an easy way to embed R code in a Jekyll-Bootstrap blog post. 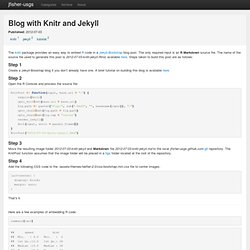 The only required input is an R Markdown source file. Creating your Jekyll-Bootstrap powered blog for R blogging. As you might have noticed, I recently decided to move Fellgernon Bit from Tumblr to GitHub. 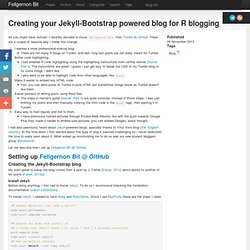 There are a couple of reasons why I made this change. I wanted a more professional-looking blog. There are not many R blogs on Tumblr, and well, long text posts are not really meant for Tumblr.Better code highlighting. I had enabled R code highlighting using the highlighting instructions from Jeffrey Horner (Horner, Part I). The instructions are great! I had also previously heard about Jekyll-powered blogs, specially thanks to Yihui Xie's blog (Xie, English version). 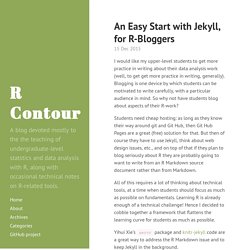 Blogging is one device by which students can be motivated to write carefully, with a particular audience in mind. So why not have students blog about aspects of their R-work? Students need cheap hosting: as long as they know their way around git and Git Hub, then Git Hub Pages are a great (free) solution for that. But then of course they have to use Jekyll, think about web design issues, etc., and on top of that if they plan to blog seriously about R they are probably going to want to write from an R Markdown source document rather than from Markdown. All of this requires a lot of thinking about technical tools, at a time when students should focus as much as possible on fundamentals.

Markdown Cheatsheet. This is intended as a quick reference and showcase. 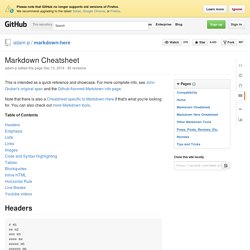