There Are No "Almost Great" Leaders. Justin Locke On December 10, 2014 Once upon a time, I had the extraordinary privilege of playing for some of the greatest conductors in history. 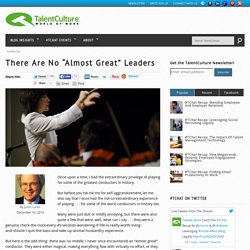 But before you tsk-tsk me for self-aggrandizement, let me also say that I once had the not-so-extraordinary experience of playing . . . for some of the worst conductors in history too. Many were just dull or mildly annoying, but there were also quite a few that were, well, what can I say . . . they were a genuine check-the-clock-every-45-seconds-wondering-if-life-is-really-worth-living-and-should-I-quit-the-bass-and-take-up-animal-husbandry experience. But here is the odd thing: there was no middle.

I never once encountered an “almost great” conductor. When I stepped out of my cultural silo to share this phenomenon with the broader world of people who earn money for a living, I discovered that it was not at all unique to the music business. Note, their numbers are not evenly distributed between the two. How to achieve it? Langwitches: @coursa 's amazing keynote ... Remind101 : A great reminder via... Poida. Poida. Poida. Poida. The Psychology of Getting Unstuck: How to Overcome the “OK Plateau” of Performance & Personal Growth. By Maria Popova “When you want to get good at something, how you spend your time practicing is far more important than the amount of time you spend.” 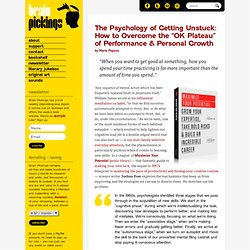 “Any sequence of mental action which has been frequently repeated tends to perpetuate itself,” William James wrote in his influential meditation on habit, ”so that we find ourselves automatically prompted to think, feel, or do what we have been before accustomed to think, feel, or do, under like circumstances.” As we’ve seen, one of the most insidious forms of such habitual autopilot — which evolved to help lighten our cognitive load yet is a double-edged sword that can also hurt us — is our mercilessly selective everyday attention, but the phenomenon is particularly perilous when it comes to learning new skills. 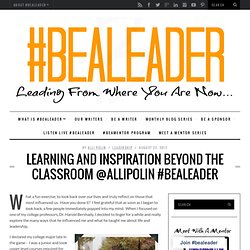 Have you done it? I feel grateful that as soon as I began to look back, a few people immediately popped into my mind. When I focused on one of my college professors, Dr. Harold Bershady, I decided to linger for a while and really explore the many ways that he influenced me and what he taught me about life and leadership. Image Credit: Flicker/Skinnylawyer I declared my college major late in the game - I was a junior and took upper level courses required for my major the same time I took my first intro level courses.

Here are the the biggest lessons I took from Harold and from college that I still carry with me today: Learning Doesn’t Have to Be Linear In Harold’s classroom, students engaged! Leadership Happens Through Relationship I didn’t pop into Harold’s classes and just leave to go on with my day. It’s OK to Say Not Now. The Shapes of Successful Stories. To have a better chance of engaging the masses with your social media and content strategies, it’s important to master the art of storytelling. 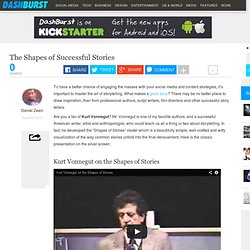 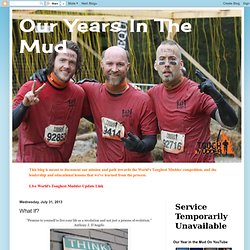 " Anthony J. D'Angelo There is always a great deal of debate around educational reform issues. The rationale behind a lot of what we do in education is decades and even centuries old. New iPad App May Be The Future Of Collaborative Online Learning. One of the biggest problems many people have with Khan Academy and YouTube Edu is simply the format. 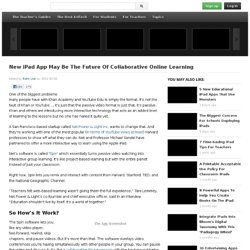 It’s not the fault of Khan or YouTube … it’s just that the passive video format is just that. It’s passive. Khan and others are introducing more interactive technology that acts as an added level of learning to the lessons but no one has nailed it quite yet. A San Francisco-based startup called Net Power & Light Inc. wants to change that. And they’re working with one of the most popular ( in terms of YouTube views at least ) Harvard professors to show off what they can do. Net’s software is called ‘ Spin ‘ which essentially turns passive video watching into interactive group learning. Right now, Spin lets you remix and interact with content from Harvard, Stanford, TED, and the National Geographic Channel. “Teachers felt web-based learning wasn’t giving them the full experience,” Tara Lemmey, Net Power & Light’s co-founder and chief executive officer, said in an interview.

Mandery : #tlap quote. How Learning Analytics Are Being Used In Education. In an unplanned series of sorts, we’re showcasing a couple of posts about the 2013 NMC/EDUCAUSE Learning Initiative Horizon Report for Higher Education . We’ve already talked about the key trends in the report and some challenges we face in implementing education technology , so we’re ready to take a look at the six technologies highlighted in the report as being game-changers for education. We’ve already looked at MOOCs and tablet computing, educational Games and gamification. Learning analytics were identified as another part of the ‘second horizon’, (or entering mainstream use in a two to three years).