Dysfunctional Families. Borderline Persnality Disorder. Bipolar Disorder. 10 Tiny Things That Affect The Way You See The World. 11 Signs Someone Is Lying To You. 15 Styles of Distorted Thinking. 28 Ways to Stop Complicating Your Life. 47 Mind-Blowing Psychological Facts You Should Know About Yourself. I’ve decided to start a series called 100 Things You Should Know about People.

As in: 100 things you should know if you are going to design an effective and persuasive website, web application or software application. Or maybe just 100 things that everyone should know about humans! Alzheimer's Disease Fact Sheet. Alzheimer’s disease is an irreversible, progressive brain disease that slowly destroys memory and thinking skills, and eventually even the ability to carry out the simplest tasks. 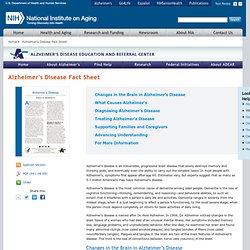 In most people with Alzheimer’s, symptoms first appear after age 60. Estimates vary, but experts suggest that as many as 5.1 million Americans may have Alzheimer’s disease. Dabrowski’s Theory and Existential Depression in Gifted Children and Adults. Encyclopedia of Mental Disorders. Escalation of commitment - Wikipedia, the free encyclopedia. Escalation of commitment was first described by Barry M. 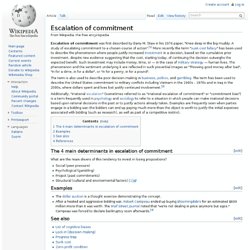 Staw in his 1976 paper, "Knee deep in the big muddy: A study of escalating commitment to a chosen course of action". [ 1 ] More recently the term " sunk cost fallacy " has been used to describe the phenomenon where people justify increased investment in a decision, based on the cumulative prior investment, despite new evidence suggesting that the cost, starting today, of continuing the decision outweighs the expected benefit. Such investment may include money, time, or — in the case of military strategy — human lives. The phenomenon and the sentiment underlying it are reflected in such proverbial images as "Throwing good money after bad", "In for a dime, in for a dollar", or "In for a penny, in for a pound". The term is also used to describe poor decision-making in business , politics , and gambling. . [ edit ] The 4 main determinants in escalation of commitment [ edit ] Examples [ edit ] See also [ edit ] References ^ Barry M.

Escalation of commitment - Wikipedia, the free encyclopedia. Heimer's Association - What is Alzheimer's. Alzheimer's and dementia basics Alzheimer's is the most common form of dementia, a general term for memory loss and other intellectual abilities serious enough to interfere with daily life. 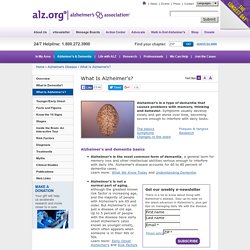 Alzheimer's disease accounts for 60 to 80 percent of dementia cases. How being called smart can actually make you stupid. A few months ago I posted a piece which has become my most popular blog post by quite a landslide. 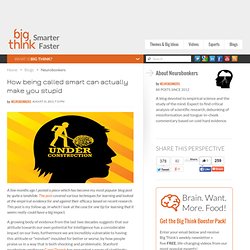 The post covered various techniques for learning and looked at the empirical evidence for and against their efficacy based on recent research. This post is my follow up, in which I look at the case for one tip for learning that it seems really could have a big impact. A growing body of evidence from the last two decades suggests that our attitude towards our own potential for intelligence has a considerable impact on our lives, furthermore we are incredibly vulnerable to having this attitude or "mindset" moulded for better or worse, by how people praise us in a way that is both shocking and problematic.

Stanford psychology professor Carol Dweck has presented a range of startlingly fascinating findings on the topic which have been broadly supported by further research. References: How to Make People Like You: 6 Science-Based Conversation Hacks. Learning Disability and ADD Myths. LD and ADD Myths Click Home Myth #1 People with LD and ADD are not very smart. 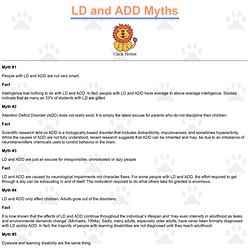 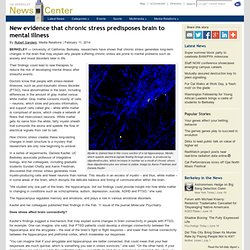 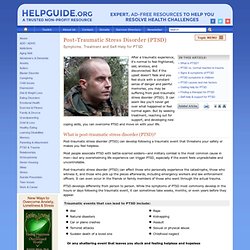 Post-traumatic stress disorder (PTSD) can develop following a traumatic event that threatens your safety or makes you feel helpless. Most people associate PTSD with battle-scarred soldiers—and military combat is the most common cause in men—but any overwhelming life experience can trigger PTSD, especially if the event feels unpredictable and uncontrollable. Psychometric Tests : Psychology. The Psychology Department has the following tests which may be used only by Psychology staff and students for testing purposes. 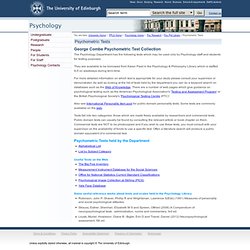 They are available to be borrowed from Karen Fleet in the Psychology & Philosophy Library which is staffed 9-5 on weekdays during term-time. For more detailed information on which test is appropriate for your study please consult your supervisor or demonstrator. Rhetoric - Wikipedia, the free encyclopedia. Painting depicting a lecture in a knight academy, painted by Pieter Isaacsz or Reinhold Timm for Rosenborg Castle as part of a series of seven paintings depicting the seven independent arts. This painting illustrates rhetorics. From Ancient Greece to the late 19th century, it was a central part of Western education, filling the need to train public speakers and writers to move audiences to action with arguments.[4] The word is derived from the Greek ῥητορικός (rhētorikós), "oratorical",[5] from ῥήτωρ (rhḗtōr), "public speaker",[6] related to ῥῆμα (rhêma), "that which is said or spoken, word, saying",[7] and ultimately derived from the verb ἐρῶ (erō), "say, speak".[8] Uses of rhetoric[edit] Scope of rhetoric[edit]

Sibling relationship. Siblings play a unique role in one another’s lives that simulates the companionship and personal importance of parents as well as the power and assistance of friends.[1] Because siblings often grow up in the same household, they have a large amount of exposure to one another, but this relationship tends to be more egalitarian than with other family members. 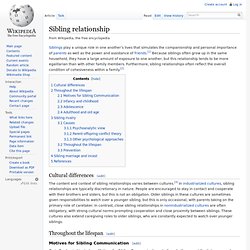 Furthermore, sibling relationships often reflect the overall condition of cohesiveness within a family.[2] Cultural differences[edit] The content and context of sibling relationships varies between cultures.[3] In industrialized cultures, sibling relationships are typically discretionary in nature. People are encouraged to stay in contact and cooperate with their brothers and sisters, but this is not an obligation. Older siblings in these cultures are sometimes given responsibilities to watch over a younger sibling, but this is only occasional, with parents taking on the primary role of caretaker. Counseling, Support and Healing Resources for Grieving Sisters and Brothers. The death of a brother or sister at any age profoundly changes the lives of surviving siblings. The State of the Brain and Diagnoses of Schizophrenia and Bipolar Disorder. A new report reckons this is the most exciting and unsettling period in the history of psychiatry since Freud started talking about sex in public.

On the one hand, the American Psychiatric Association has introduced the fifth iteration of the psychiatric diagnostic manual, DSM-V, representing the current best effort of the brightest clinical minds in psychiatry to categorize the enormously complex pattern of human emotional, cognitive, and behavioral problems. On the other hand, in new and profound ways, neuroscience and genetics research in psychiatry are yielding insights that challenge the traditional diagnostic schema that have long been at the core of the field. "Our current diagnostic system, DSM-V represents a very reasonable attempt to classify patients by their symptoms. Thou shalt not commit logical fallacies. Top 10 Thinking Traps Exposed. What Does Your Handwriting Say About You? When a Child Dies, a Therapist Warns, the Grief of Brothers and Sisters May Leave Lasting Scars : People.com Mobile.