The new app is simply called Office and is designed so you have a more seamless integration between the different office apps. The separate Outlook email app remains. The single download seems set to replace the separate Word, Excel and PowerPoint apps on both platforms even though Microsoft says it is "fully committed to supporting the existing Word, Excel, and PowerPoint mobile apps".

Product manager Ramit Arora added: "We appreciate that millions of people use and depend on these apps today, and we will continue to invest in them. " In the new app, files can be stored locally or accessed in the cloud, while you can easily share documents with other users or devices. More than ever, the new app is designed with 'quick actions' in mind to begin creating Office documents. And, handily, you can sign PDFs with your finger or stylus - Apple Pencil aficionados will be well used to doing this on the iPad already. 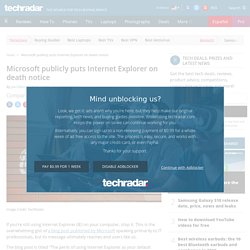 This is the overwhelming gist of a blog post published by Microsoft speaking primarily to IT professionals, but its message ultimately reaches end users like us. The blog post is titled “The perils of using Internet Explorer as your default browser,” and goes on to detail how using this dated web browser creates what’s known as “technical debt” within businesses. Technical debt collects all of the implied costs of additional work caused by opting for easier or incumbent technology solutions rather than adopting modern tools that would take longer to implement but solve more problems long term. Because IE isn’t even considered by a growing majority of web developers, people and businesses using the browser to access modern websites are at an inherent disadvantage.

Certain materials or features won’t even be available to them on modern websites through IE today. The best free video editing software we’ve tested. Trustedreviews. Microsoft: What went right under Satya Nadella? Media playback is unsupported on your device On Monday, it will be five years since Satya Nadella was announced as Microsoft's chief executive. 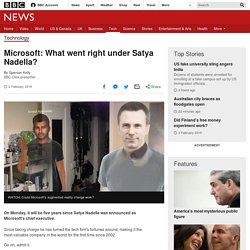 Since taking charge he has turned the tech firm's fortunes around, making it the most valuable company in the world for the first time since 2002. Go on, admit it. You thought Microsoft was so last century, didn't you? In the late 80s and 90s, the company's Windows operating system ruled the world. Catching the wave But where Bill Gates - chief executive from 1975 to 2000 - caught the wave of personal computing, so Steve Ballmer - 2000 to 2014 - failed to do likewise with mobiles. Although the Surface tablet is a modest success, Microsoft's smartphones have flopped despite the firm paying more than 5.4bn euros ($6.2bn; £4.7bn) for Nokia's handset business. Image copyright Getty Images. Microsoft is planning new 4K webcams for Windows 10 and the Xbox.

Microsoft's next hardware move could see it heading back into the webcam market, if insider rumors are to be believed – reports suggest several models are in the pipeline, that could offer compatibility with Windows 10 and the Xbox One consoles. 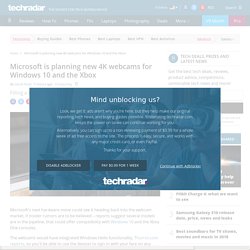 The webcams would have integrated Windows Hello functionality, Thurrot.com reports, so you'll be able to use the devices to sign in with your face on any computer running Windows 10 (up to this point the feature has only been available on the webcams built into Microsoft's range of Surface computers). You'd also be able to sign into your account on an Xbox One just by moving in front of the camera – something that hasn't been possible since Microsoft shuttered the Kinect program. Apparently one or more of the cameras will offer a 4K resolution too. Microsoft gives Marks & Spencer an AI facelift. One of the UK's oldest shops is set for a technology makeover after Marks and Spencer announced a new partnership with Microsoft. 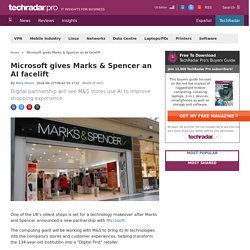 The computing giant will be working with M&S to bring its AI technologies into the company's stores and customer experiences, helping transform the 134-year-old institution into a "Digital First" retailer. A team of specialist Microsoft AI engineers will be working with M&S's Retail Labs group in order to help speed up the store's digital transformation efforts, as M&S looks to become one of the UK's most tech-friendly retailers. Smart shopping “We firmly believe that AI has the power to amplify human ingenuity,” says Cindy Rose, CEO, Microsoft UK. “The retail sector is one of the most challenging landscapes in the UK right now and we are thrilled to be working with M&S to explore how AI can help such an iconic brand transform the customer experience and improve wider operations.”

These are the best Surface Pro deals and bundles in June 2018. Microsoft and Walmart team up to take on Amazon. How Microsoft Is About to Make Google Chrome Even Better. You’ve probably heard Microsoft will base its Edge browser on Chromium, the open-source project that forms the basis for Google Chrome. 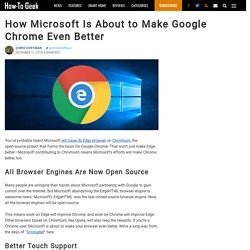