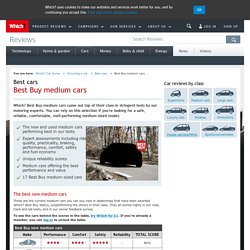 Best Buy medium cars came out top of their class in stringent tests by our motoring experts. You can rely on this selection if you're looking for a safe, reliable, comfortable, well-performing medium-sized model. The new and used medium cars performing best in our testsExpert assessments including ride quality, practicality, braking, performance, comfort, safetyand fuel economyUnique reliability scoresMedium cars offering the best performance and value17 Best Buy medium-sized cars.

Car Hire Excess Insurance. Finding the best car hire deal isn't just about finding the cheapest rental car, the extras that you're charged at the rental desk can also add up. The most expensive of these extras is usually the car hire excess insurance which can cost as much as £20 per day depending on the company and the pick-up location. We've scoured the market to find a lower cost alternative for our customers, and have found stand-alone insurance from iCarhireinsurance at just £2.99 per day which can save you up to 65% when compared to the rental desk.

What's more, hire car excess insurance from iCarhireinsurance.com protects the vulnerable parts of the rental vehicle that are usually excluded by the rental companies, even if you've bought their more expensive damage waivers. To get a quote or buy a policy, click here to visit iCarhireinsurance. What is Car Hire Excess Insurance? How it works1. Driving abroad - what to know for the summer. A few months ago we ran an article about the change in the driving licence system - the paper part of the licence is no longer valid - but there was one vital fact that we didn't spot at the time. 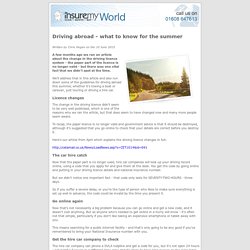 We'll address that in this article and also run down some of the guidelines for driving abroad this summer, whether it's towing a boat or caravan, just touring or driving a hire car. Licence changes The change in the driving licence didn't seem to be very well publicised, which is one of the reasons why we ran the article, but that does seem to have changed now and many more people seem aware. To recap, the paper licence is no longer valid and government advice is that it should be destroyed, although it's suggested that you go online to check that your details are correct before you destroy it.

Driving licence changes - did you know? Were you aware that the paper bit of your driving licence was going to be phased out in a couple of months time? 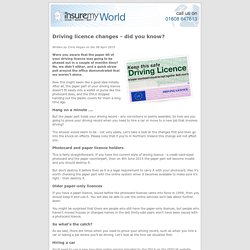 No, we didn't either, and a quick straw poll around the office demonstrated that we weren't alone. Now this might seem like a good idea initially. Mea culpa - French roundabout confusion. As many of you will know, last month we wrote about the somewhat farcical situation regarding recent changes to French driving laws, or the lack of them, since most seemed to have disappeared. 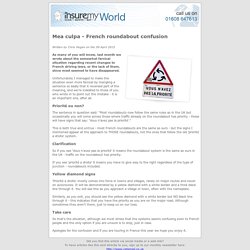 What's up with the new french driving laws? It's a few years now since significant changes were made to driving regulations in France but with spring apparently on the way in places we thought a review of those changes was in order. 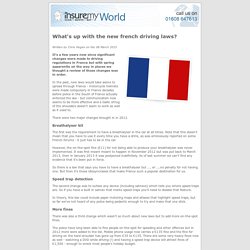 In the past, new laws would take aeons to spread through France - motorcycle helmets were made compulsory in France decades before police in the South of France actually enforced the law - but communication now seems to be more effective and a Gallic shrug of the shoulders doesn't seem to work as well as it used to. There were two major changes brought in in 2012. Breathalyser kit. Top Five Money Saving Tips for Car Insurance. Here's our guide to the top five ways to save money on car insurance. 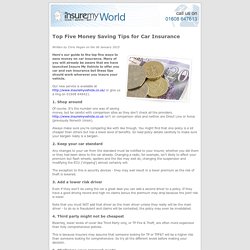 Many of you will already be aware that we have launched Insure My Vehicle to offer you car and van insurance but these tips should work wherever you insure your vehicle. Our new service is available at or give us a ring on 01608 648421. 1. Shop around Of course. Always make sure you're comparing like with like though. 2. Top seven winter driving tips from InsureMyVehicle.co.uk. It won't surprise anyone to hear that this time of year is the busiest for car and van insurance companies. 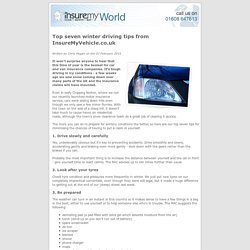 It's tough driving in icy conditions - a few weeks ago we saw snow coming down over many parts of the UK and the insurance claims will have mounted. Even in leafy Chipping Norton, where we run our recently launched motor insurance service, cars were sliding down hills even though we only saw a few minor flurries. With the town on the side of a steep hill, it doesn't take much to cause havoc on residential roads, although the town's snow clearance team do a great job of clearing it quickly. The more you can do to prepare for wintery conditions the better, so here are our top seven tips for minimising the chances of having to put a claim in yourself. 1. Yes, unbelievably obvious but it's key to preventing accidents. Goodbye tax disc - hello car cloning? Just in case you've missed it (and lots of people have) road tax discs will no longer be given out after the end of September. 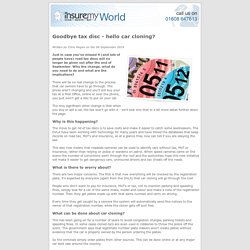 Make the best of depreciation. Depreciation is a killer for economic motoring. 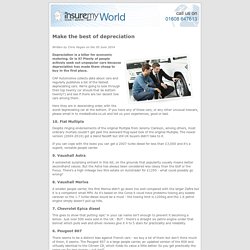 Or is it? Plenty of people actively seek out unpopular cars because depreciation has made them cheap to buy in the first place. CAP Automotive collects data about cars and regularly publishes a list of the fastest depreciating cars. We're going to look through their top twenty (or should that be bottom twenty?) And see if there are ten decent tow cars among them. Here they are in descending order, with the worst depreciating car at the bottom. 10. Despite ringing endorsements of the original Multipla from Jeremy Clarkson, among others, most ordinary mortals couldn't get past the awkward frog-eyed look of the original Multipla.

If you can cope with the looks you can get a 2007 turbo diesel for less than £3,000 and it's a superb, versatile people carrier. 9. A somewhat surprising entrant in this list, on the grounds that popularity usually means better secondhand values. 8. 7.