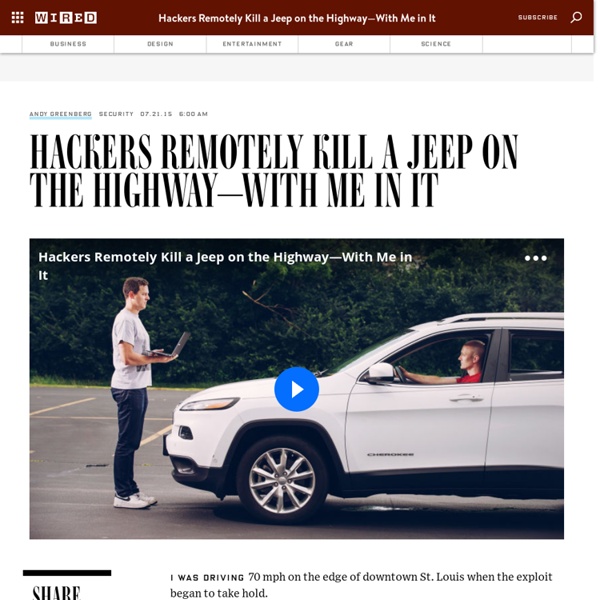 I was driving 70 mph on the edge of downtown St. Louis when the exploit began to take hold. Though I hadn’t touched the dashboard, the vents in the Jeep Cherokee started blasting cold air at the maximum setting, chilling the sweat on my back through the in-seat climate control system. Next the radio switched to the local hip hop station and began blaring Skee-lo at full volume. I spun the control knob left and hit the power button, to no avail. Then the windshield wipers turned on, and wiper fluid blurred the glass. As I tried to cope with all this, a picture of the two hackers performing these stunts appeared on the car’s digital display: Charlie Miller and Chris Valasek, wearing their trademark track suits. The Jeep’s strange behavior wasn’t entirely unexpected. Click to Open Overlay Gallery As the two hackers remotely toyed with the air-conditioning, radio, and windshield wipers, I mentally congratulated myself on my courage under pressure. Immediately my accelerator stopped working.

Elon Musk and Stephen Hawking Join Call for Ban on Artificially Intelligent Weapons Physicist Stephen Hawking and Tesla Motors CEO Elon Musk have joined scores of artificial intelligence and robotics experts calling for a ban on “offensive autonomous weapons” in an open letter published Monday. “AI technology has reached a point where the deployment of such systems is–practically if not legally–feasible within years, not decades, and the stakes are high,” reads the letter, which the Guardian reports will be presented Wednesday at the International Joint Conference on Artificial Intelligence in Buenos Aires. “Autonomous weapons have been described as the third revolution in warfare, after gunpowder and nuclear arms.” The letter distinguishes AI weapons, which can select and attack targets without human orders, from drones and cruise missiles whose targets are selected by humans. “It will only be a matter of time until they appear on the black market and in the hands of terrorists, dictators,” and other bad actors, the signatories warn. Michael Ochs Archives/Getty Images

Magna Tests a Single-Camera System for Self-Driving Cars Most self-driving vehicles, including Google’s various prototypes, are bedazzled with sensors, including cameras, ultrasound, high-accuracy GPS, and expensive laser-ranging instruments known as lidar. These devices help the cars build up a composite picture of the surrounding world in order to drive safely. But some components, such as the lidar, cost tens of thousands of dollars. In demo that shows how quickly some of the technology is advancing, Magna, a company that supplies components to most large carmakers, showed recently that it can make a car drive itself (on the highway at least) using just a single camera embedded in the windshield. Magna hasn’t said how much the technology would cost carmakers, but vehicle camera systems tend to cost hundreds of dollars rather than thousands. The feat is made possible thanks to rapid progress in the software, which comes from the Israeli company MobileEye, that’s used to interpret a scene.

A World Without Work 1. Youngstown, U.S.A. The end of work is still just a futuristic concept for most of the United States, but it is something like a moment in history for Youngstown, Ohio, one its residents can cite with precision: September 19, 1977. For much of the 20th century, Youngstown’s steel mills delivered such great prosperity that the city was a model of the American dream, boasting a median income and a homeownership rate that were among the nation’s highest. But as manufacturing shifted abroad after World War II, Youngstown steel suffered, and on that gray September afternoon in 1977, Youngstown Sheet and Tube announced the shuttering of its Campbell Works mill. Within five years, the city lost 50,000 jobs and $1.3 billion in manufacturing wages.

Oliver Sacks: My Periodic Table I LOOK forward eagerly, almost greedily, to the weekly arrival of journals like Nature and Science, and turn at once to articles on the physical sciences — not, as perhaps I should, to articles on biology and medicine. It was the physical sciences that provided my first enchantment as a boy. In a recent issue of Nature, there was a thrilling article by the Nobel Prize-winning physicist Frank Wilczek on a new way of calculating the slightly different masses of neutrons and protons. The new calculation confirms that neutrons are very slightly heavier than protons — the ratio of their masses being 939.56563 to 938.27231 — a trivial difference, one might think, but if it were otherwise the universe as we know it could never have developed. The ability to calculate this, Dr.

The Most Secure Way to Communicate? An iPod Touch If you want to communicate really securely, you may assume you need some government level spy training, a high tech encrypted phone, or at least a custom operating system. Nope. Not at all. It turns out the most secure communications device available to anyone, anywhere, right now is the humble iPod Touch. No, seriously. Even if that’s not at all what Apple meant for you to do with an iPod, the fact that it is not on a cellular network yet can run so much vetted software on a relatively robust operating system makes it a perfect device for secure communication.

Self-Driving Cars Get a Code of Ethics A philosopher is perhaps the last person you’d expect to have a hand in designing your next car, but that’s exactly what one expert on self-driving vehicles has in mind. Chris Gerdes, a professor at Stanford University, leads a research lab that is experimenting with sophisticated hardware and software for automated driving. But together with Patrick Lin, a professor of philosophy at Cal Poly, he is also exploring the ethical dilemmas that may arise when vehicle self-driving is deployed in the real world. Gerdes and Lin organized a workshop at Stanford earlier this year that brought together philosophers and engineers to discuss the issue.

Roughly 100 Fantastic Magazine Articles from 2014 Each year, I keep a running list of exceptional nonfiction that I encounter as I publish The Best of Journalism, an email newsletter that I send out once or twice a week. This is my annual attempt to bring some of those stories to a wider audience. I could not read or note every worthy article that was published last calendar year and I haven't included any paywalled articles or anything published at The Atlantic.