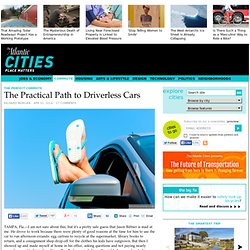 —I am not sure about this, but it's a pretty safe guess that Jason Bittner is mad at me. He drove to work because there were plenty of good reasons at the time for him to use the car to run afternoon errands: egg cartons to recycle at the supermarket, library books to return, and a consignment shop drop-off for the clothes his kids have outgrown. But then I showed up and made myself at home in his office, asking questions and not paying nearly enough respect to his indoor Green Bay Packers wind chime. It quickly became clear to him that none of his chores are going to get done.

This is why Midwesterners think New Yorkers are rude, I guess. Bittner is into "trip-chaining," he says, in his personal life as well as his professional one. By the time those saplings mature, driverless cars may be here, and, like horseless carriages a century and a half earlier, they will be a quantum leap removed from their predecessors. Google's Self-Driving Cars: Coming Soon to a Road Near You. The First Look at How Google's Self-Driving Car Handles City Streets. MOUNTAIN VIEW, Calif. 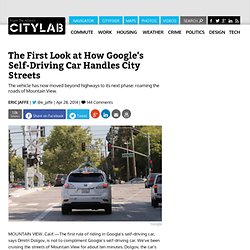 He is doing no more to guide the vehicle than I'm doing from the backseat. "The car knows," says Dolgov. He means I have violated some code of robotic superstition, calling the contest too early. Google's self-driving car project began in 2009. Over the next few minutes the autonomous vehicle makes several maneuvers that someone less privy to Dolgov's first rule would have been tempted to compliment. Between you and me: amazingly smooth.

Equally amazing is that people around us are going about their daily lives. It can't be that they've missed us. "Every robot has a big red button," says Dolgov. Googles-next-phase-in-driverless-cars-no-brakes-or-steering-wheel. Photo MOUNTAIN VIEW, Calif. — Humans might be the one problem Google can’t solve. 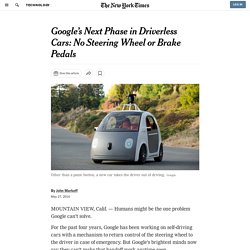 For the past four years, Google has been working on self-driving cars with a mechanism to return control of the steering wheel to the driver in case of emergency. But Google’s brightest minds now say they can’t make that handoff work anytime soon. Their answer? Take the driver completely out of the driving. The company has begun building a fleet of 100 experimental electric-powered vehicles that will dispense with all the standard controls found in modern automobiles. The car would be summoned with a smartphone application. Continue reading the main story Video Google won’t say if it intends to get into the car manufacturing business or simply supply technology to carmakers, but it says there are plenty of possibilities if it can persuade regulators to allow cars with no drivers. There were no crashes. The vehicles will have electronic sensors that can see about 600 feet in all directions. Google made a self-driving car, and it doesn't have a steering wheel.

Google today announced its own design for self-driving cars, which will drive people around without a steering wheel or pedals. 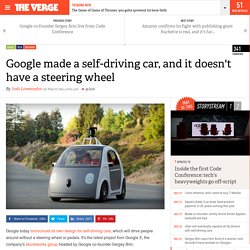 It's the latest project from Google X, the company's skunkworks group headed by Google co-founder Sergey Brin. Two people, no drivers The company has already shown off its own self-driving technology, which retrofits existing vehicles made by Toyota and Lexus. However this new version, which was announced by Brin at the Recode conference, is a new design that fits two people, and is driven entirely by computer using a variety of on-board computers and sensors. Google says the program is currently in a prototype phase, but that it plans to build around 100 early versions of the vehicles for testing this summer. It uses off the shelf parts, for now.

Visual identity of the car