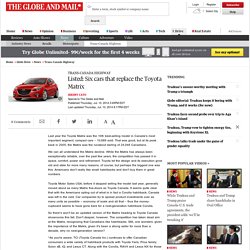 That was good, but at its peak back in 2005, the Matrix was the runabout darling of 24,048 Canadians. We can all understand the Matrix decline. While the Matrix has always been exceptionally reliable, over the past few years, the competition has passed it in space, comfort, power and refinement. Toyota let the design and its execution grow old and stale for more many reasons, of course, but perhaps the biggest one was this: Americans don’t really like small hatchbacks and don’t buy them in great numbers. Toyota Motor Sales USA, before it stopped selling the model last year, generally moved about as many Matrix five-doors as Toyota Canada. So there’s won’t be an updated version of the Matrix heading to Toyota Canada showrooms this fall. 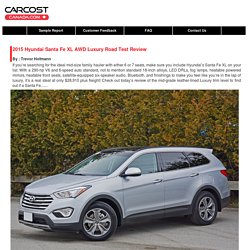 The Tucson is a true compact, yet the regular five-passenger Santa Fe Sport is slightly shorter than most mid-size models and even some compacts, albeit wider than all compact models in the mainstream CUV sector. Being different than the status quo doesn't always work to an automaker's advantage, but Hyundai has nevertheless found a nice niche that has its Santa Fe achieving impressive sales numbers. In 2014 the five-passenger model found 27,580 Canadian buyers, whereas the larger seven-occupant Santa Fe XL added another 4,894 owners to Hyundai's SUV camp for a total of 32,474 down the road. Along with the little Tucson's 11,856 sales, Hyundai's CUV tally came to 44,330 units last year. Of course success doesn't happen by chance. Likewise, inside they're mostly identical from the second row forward, which for the most part is a very good thing.

UVC Webcam Devices. UVC webcam devices are collectively those USB webcams that are UVC compliant and are supported under Linux by the uvcvideo kernel driver module. 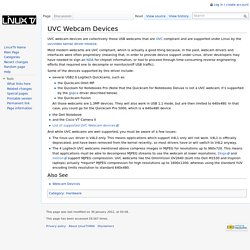 Most modern webcams are UVC compliant, which is actually a good thing because, in the past, webcam drivers and interfaces were often proprietary (meaning that, in order to provide device support under Linux, driver developers may have needed to sign an NDA for chipset information, or had to proceed through time-consuming reverse engineering efforts that required one to decompile or monitor/sniff USB traffic).

Some of the devices supported by this driver include: several USB2.0 Logitech Quickcams, such as: the Quickcam Orbit MP the Quickam for Notebooks Pro (Note that the Quickcam for Notebooks Deluxe is not a UVC webcam; it's supported by the gspca driver described below) the Quickcam Fusion All those webcams are 1.3MP devices. They will also work in USB 1.1 mode, but are then limited to 640x480. Linux UVC driver & tools. Introduction Welcome to the USB Video Class Linux device driver home. 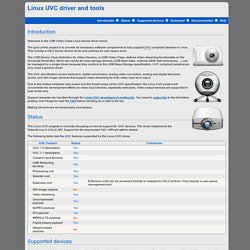 The goal of this project is to provide all necessary software components to fully support UVC compliant devices in Linux. This include a V4L2 kernel device driver and patches for user-space tools. 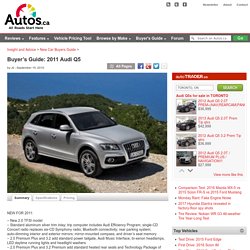 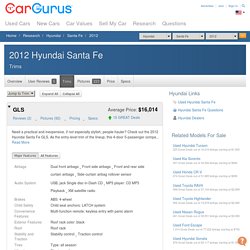 Of course, the ubiquitous 78.4 cubic feet of cargo space (with the rear seats folded), as well as the cloth/leather upholstery and power-adjustable driver’s seat further enhance this 5-passenger compact crossover’s image in the mind of the frugal, family-rearing commuter. Add to all that 18-inch alloy wheels, a roof rack and rear spoiler, not to mention standard trailer wiring and an available tow hitch, and this midlevel trim looks better and better. Of course full power accessories, including heated outside mirrors, grace this classy mini-ute, as do a leather-trimmed steering wheel and shift knob, simulated wood cabin accents, cruise control and telescoping tilt-wheel steering. Compare Hyundai Santa Fe vs. Toyota Venza vs. Chevrolet Traverse.

2014 Nissan Pathfinder and Pathfinder Hybrid: Car Seat Check. By Jennifer Geiger on February 25, 2014 Nissan redesigned its Pathfinder for 2013 and added a hybrid model for 2014. 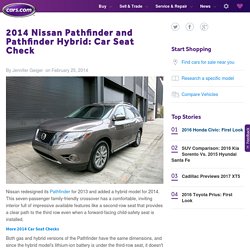 This seven-passenger family-friendly crossover has a comfortable, inviting interior full of impressive available features like a second-row seat that provides a clear path to the third row even when a forward-facing child-safety seat is installed. More 2014 Car Seat Checks Both gas and hybrid versions of the Pathfinder have the same dimensions, and since the hybrid model's lithium-ion battery is under the third-row seat, it doesn't impact cargo space or interior room. The Car Seat Lady – LATCH in Vehicles with 3 Rows (or more) Posted in: The LATCH System, Vehicle Buying Guide, Vehicles The 3-row vehicles are arranged by type, and include model years 2013-15: SUVs6 seater models7 seater models8 seater modelsMinivans7 and 8 seater modelsPassenger Vans10 & 11 seater models12 seater models15 seater models A few things to remember: Lower anchors and tether anchors can NOT be added to these vehicles… what they come with is what you get. 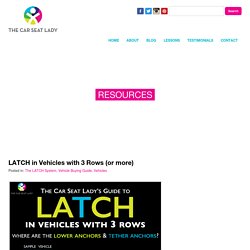 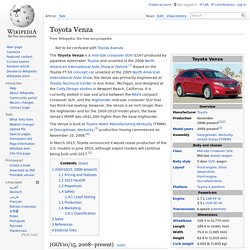 Venza is powered by either Toyota's 3.5-liter 2GR-FE V6 or all-new 2.7-liter 1AR-FE I4 engine, both mated to a 6-speed automatic transmission.[6] Front-wheel drive and all-wheel drive are available as options. The U.S. Pricing and features[edit] KIA Sorento models. Options. Hyundai Santa Fe. The Hyundai Santa Fe (Korean: 현대 싼타페) is a Mid-size SUV produced by the South Korean manufacturer Hyundai since 2000. 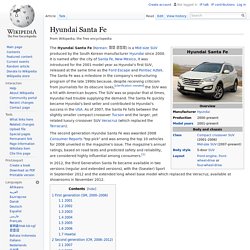 It is named after the city of Santa Fe, New Mexico, it was introduced for the 2001 model year as Hyundai's first SUV, released at the same time as the Ford Escape and Pontiac Aztek. The Santa Fe was a milestone in the company's restructuring program of the late 1990s because, despite receiving criticism from journalists for its obscure looks,[clarification needed] the SUV was a hit with American buyers. The SUV was so popular that at times, Hyundai had trouble supplying the demand. The Santa Fe quickly became Hyundai's best seller and contributed to Hyundai's success in the USA. Kia Sorento. First generation (2003–2010)[edit] 2003–2007[edit] Debuting in 2002, the first generation Sorento was a traditional truck-based body-on-frame SUV. It was offered in two trim levels: LX and EX.

All American Sorentos also came with dual front airbags and dual side-curtain airbags in the front and rear. An optional four-wheel drive system with low range received praise for adding to the vehicle's off-road ability. Toyota Highlander. The Toyota Highlander, also known as the Toyota Kluger, is a midsize crossover SUV produced by Toyota. It is built on the platform of the Toyota Camry.[1] Announced in April 2000 at the New York Auto Show and arriving in late 2000 in Japan and January, 2001, in North America, the Highlander became the first car-based midsize SUV or midsize crossover.[2] The Highlander is the crossover counterpart to the more rugged, truck-based midsize 4Runner and became Toyota's best-selling SUV before being surpassed by the smaller RAV4 in 2006. In Japan, the Kluger is exclusive to dealership network called Toyota NETZ as a larger alternative to the RAV4.

Unable to use the Highlander name in Japan and Australia because of a trademarked Hyundai Terracan trim line, Toyota calls the vehicle the Toyota Kluger (トヨタ クルーガー, Toyota Kurūgā?) Hyundai Santa Fe. The Hyundai Santa Fe (Korean: 현대 싼타페) is a Mid-size SUV produced by the South Korean manufacturer Hyundai since 2000. It is named after the city of Santa Fe, New Mexico, it was introduced for the 2001 model year as Hyundai's first SUV, released at the same time as the Ford Escape and Pontiac Aztek. The Santa Fe was a milestone in the company's restructuring program of the late 1990s because, despite receiving criticism from journalists for its obscure looks,[clarification needed] the SUV was a hit with American buyers. Nissan Pathfinder. For the model marketed as Nissan Terrano II in parts of Europe, see Nissan Terrano II. For the model marketed as Nissan Terrano in India, see Dacia Duster. First generation WD21 series (1985–1995)[edit] Before the Pathfinder there was the Nissan Bushmaster (an aftermarket conversion of the Datsun Truck), but they are rare as well.

One of the features that was unique at the time was an optional 4WD system that could be engaged electronically while the vehicle was moving, mated to a four-speed automatic transmission. All WD21 Pathfinders were available in both 2WD and manually engaged 4WD configurations, with base models installed with a 2.4 L four cylinder engine. In Japan, it was exclusive to Nissan Bluebird Shop locations, where it was called the Terrano as a smaller companion to the larger Nissan Safari. Top 10 Most Fuel Efficient Three-Row SUVs. Best SUVs for Third-Row Seating Space. However, manufacturers are drawing attention to some new third-row features in an attempt to highlight their passenger friendliness. Autobytel’s Best 7-Passenger Crossovers. 10 Best 7 Passenger SUVs. The best 7 passenger SUVs are those which are able to replace not just a family sedan but also a minivan via their people-moving and cargo-hauling capacity.

10 Best SUVS With 3rd Row Seating. Best 7+ Passenger Vehicles of 2013. Below is a list of all 2013 SUVs, minivans and crossovers that seat 7 or more passengers. There are 45 different 7 passenger vehicles in total, so we summarized the most important details to help you compare them. Certified Pre-Owned MDX Model Year Comparison Page.