Hawaiian Mythology (An Intro to Hawaiian Gods, Goddesses & Legends) THE TOP ELEVEN DEITIES IN HAWAIIAN MYTHOLOGY. Hawaiian mythology as a subset of Polynesian mythology will be the subject I tackle here. 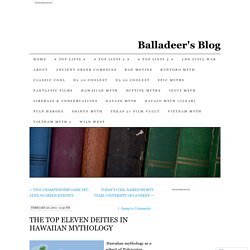 I will be examining many of the Polynesian Island groups separately in the near future, some with full pages of their own, but to whet everyone’s appetites I figured I would start out with a Top 11 list looking at the major Hawaiian deities. NEW – This list was so popular I did a sequel with eleven more Hawaiian deities – when you’re done with this list click here: hawaiian-mythology-2/ Shinto Myth – KOREAN DEITIES – NORSE DEITIES – Hawaiian Recreation - Games People Played. Hawaiian Recreation Games People Played by Betty Fullard-Leo In old Hawai'i, there was a time for work and a time for play. 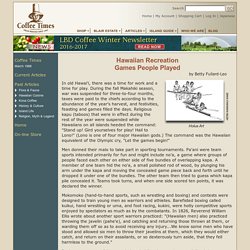 During the fall Makahiki season, war was suspended for three-to-four months, taxes were paid to the chiefs according to the abundance of the year's harvest, and festivities, feasting and games filled the days. Religious kapu (taboos) that were in effect during the rest of the year were suspended while Hawaiians on all islands heeded the command: "Stand up! Gird yourselves for play! HuffPost is now a part of Verizon Media. Picture Hawaii. 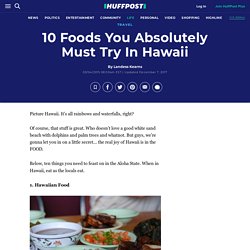 It's all rainbows and waterfalls, right? Of course, that stuff is great. Who doesn't love a good white sand beach with dolphins and palm trees and whatnot. Hawaiian Beliefs & Values. Hawaiian music. The rich music of Hawaii is a unique mix of many influences with peaceful rhythms and poetic lyrics that celebrate island life. 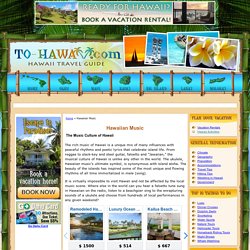 From reggae to slack-key and steel guitar, falsetto and "Jawaiian," the musical culture of Hawaii is unlike any other in the world. The ukulele, Hawaiian music's ultimate symbol, is synonymous with island aloha. Boundless Art History. Pre-European Hawaiian Art Hawaiian art can be divided into pre-European art, non-native art, and art produced by Hawaiians incorporating western ideas. 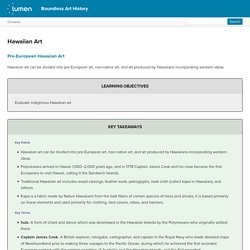 Learning Objectives Evaluate indiginous Hawaiian art Key Takeaways Key Points. Hawaii Literature. When it comes to artistic expression on the islands of Hawaii the first thing that many people think of is hula dancing and extravagant luau feasts. 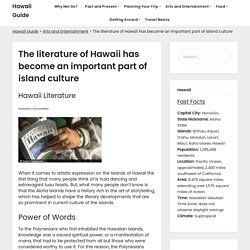 But, what many people don't know is that the Aloha Islands have a history rich in the art of storytelling, which has helped to shape the literary developments that are so prominent in current culture of the islands. Power of Words To the Polynesians who first inhabited the Hawaiian islands, knowledge was a sacred spiritual power, or a manifestation of mana, that had to be protected from all but those who were considered worthy to use it. For this reason, the Polynesians didn't develop a written language for fear that the power of knowledge would spread uncontrollably to the common people, who would misuse it. In the past, Hawaiians believed that words held a spiritual power all their own, which transmit knowledge.

The Hawaiians changed their beliefs about literacy with arrival of Western culture on the islands. Famous Hawaiian Authors Oration. The Legend of Kamalo and the Shark God. Long ago on the island of Molokai lived Kupa, the high chief, and Kamalo, one of his priests. 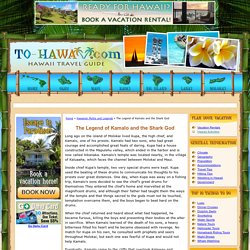 Kamalo had two sons, who had great courage and accomplished great feats of daring. Kupa had a house constructed in the Mapulehu valley, which ended in the harbor and is now called Aikanaka. Kamalo's temple was located nearby, in the village of Kaluaaha, which faces the channel between Molokai and Maui. Inside chief Kupa's temple, two very special drums were kept.

Kupa used the beating of these drums to communicate his thoughts to his priests over great distances. When the chief returned and heard about what had happened, he became furious, killing the boys and presenting their bodies at the alter in sacrifice. Eventually, Kamalo came to the cliffs that overlook Kalawao and Kalaupapa. The guards explained that in order not to be eaten, he had to hide in a nearby rubbish pile and wait for Kauhuhu, the shark god to arrive on the eighth wave. Kamalo did as he was told and waited. Hawaiian Myths and Legends. Hawaii Ethnicity. Hawaii - an Ethnically Mixed Plate Hawaii is one of the most racially diverse places in the world as there is no majority - everyone is in a minority. 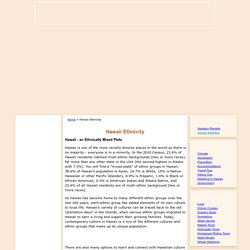 In the 2010 Census, 23.6% of Hawaii residents claimed multi-ethnic backgrounds (two or more races), far more than any other state in the USA (the second highest is Alaska with 7.3%). You will find a "mixed plate" of ethnic groups in Hawaii; 38.6% of Hawaii's population is Asian, 24.7% is White, 10% is Native Hawaiian or other Pacific Islanders, 8.9% is Hispanic, 1.6% is Black or African American, 0.3% is American Indian and Alaska Native, and 23.6% of all Hawaii residents are of multi-ethnic background (two or more races).

As Hawaii has become home to many different ethnic groups over the last 200 years, each ethnic group has added elements of its own culture to local life. Geography of Hawaii - World Atlas. 9 Fascinating Stories Of Hawaiian Mythology  Like many indigenous peoples, the ancient Hawaiians felt a deep connection to the aina (land), and used stories of their gods and goddesses to explain everything from lava flows to the creation of the Hawaiian Islands. 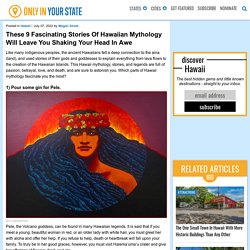 These Hawaiian myths and legends are full of passion, betrayal, love, and death, and are sure to astonish you. We’re aware that these uncertain times are limiting many aspects of life as we all practice social and physical distancing. While we’re continuing to feature destinations that make our state wonderful, we don’t expect or encourage you to go check them out immediately. We believe that supporting local attractions is important now more than ever and we hope our articles inspire your future adventures! And on that note, please nominate your favorite local business that could use some love right now: Hawaii Population 2019 (Demographics, Maps, Graphs) Based on the most recent estimates released by the US Census, we estimate the 2020 population of Hawaii at 1.41 million. 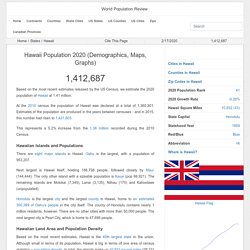 At the 2010 census the population of Hawaii was declared at a total of 1,360,301. Estimates of the population are produced in the years between censuses - and in 2015, this number had risen to 1,431,603. This represents a 5.2% increase from the 1.36 million recorded during the 2010 Census. Hawaiian Islands and Populations. Religion in Hawaii - Living in Hawaii - Moving to Oahu, Maui, Kauai, Big Island. Over more than six years in Hawaii I didn’t meet many people that were overtly, devoutly religious. It seems like the people in the islands, in general, are extremely happy to be living in paradise on earth and they’re not looking for whatever paradise might be found in religion. That said, there are churches all over the islands – and some Buddhist temples as well.

It is the newest of the states (it joined the union in 1959) and it is the only U.S. state that is an island archipelago. Hawaii is located in the Pacific Ocean to the southwest of the continental U.S., southeast of Japan and northeast of Australia. Hawaii is known for its tropical climate, unique topography, and natural environment, as well as its multicultural population. Hawaii has been continuously inhabited since about 300 B.C.E. according to archeological records.