Family and Tribal Structure - All about the Inuits: For Kids! Families are really important in Inuit society, because they are the building blocks of the larger society as a whole. 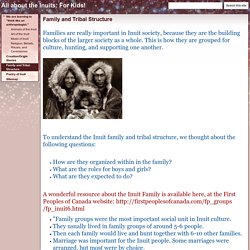 This is how they are grouped for culture, hunting, and supporting one another. To understand the Inuit family and tribal structure, we thought about the following questions: How are they organized within in the family? What are the roles for boys and girls? What are they expected to do? A wonderful resource about the Inuit Family is available here, at the First Peoples of Canada website: "Family groups were the most important social unit in Inuit culture.They usually lived in family groups of around 5-6 people.Then each family would live and hunt together with 6-10 other families.Marriage was important for the Inuit people.

Nunatsiavut Government. The Labrador Inuit Land Claims Agreement set a precedent by including self-government provisions within the land claim. 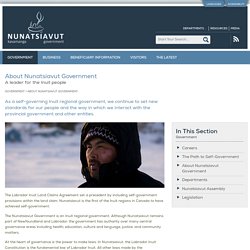 Nunatsiavut is the first of the Inuit regions in Canada to have achieved self-government. The Nunatsiavut Government is an Inuit regional government. Although Nunatsiavut remains part of Newfoundland and Labrador, the government has authority over many central governance areas including health, education, culture and language, justice, and community matters. Religion. Inuktitut: In the Way of the Inuit - the Inuktitut language - Project Naming - Library and Archives Canada. Inuktitut: In the Way of the Inuit Inuktitut is the traditional oral language of Inuit in the Arctic. 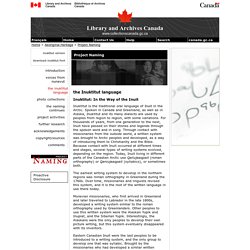 Spoken in Canada and Greenland, as well as in Alaska, Inuktitut and its many dialects are used by peoples from region to region, with some variations. For thousands of years, from one generation to the next, Inuit have passed on their stories and legends through the spoken word and in song. Through contact with missionaries from the outside world, a written system was brought to Arctic peoples and developed, as a way of introducing them to Christianity and the Bible.

Because contact with Inuit occurred at different times and stages, several types of writing systems evolved, depending on the region. The earliest writing system to develop in the northern regions was roman orthography in Greenland during the 1760s. Eastern Canadian Inuit were the last peoples to be introduced to a writing system, and the only group to develop one that was syllabic. Reviews. Heather E. 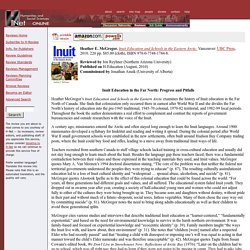 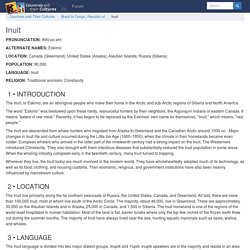 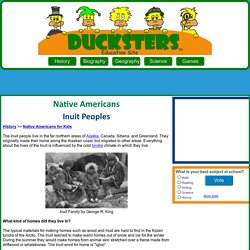 They originally made their home along the Alaskan coast, but migrated to other areas. Everything about the lives of the Inuit is influenced by the cold tundra climate in which they live. Inuit Family by George R. King What kind of homes did they live in? The typical materials for making homes such as wood and mud are hard to find in the frozen tundra of the Arctic.

What was their clothing like? The Inuit needed thick and warm clothing to survive the cold weather. What did the Inuit people eat? The Inuit people were unable to farm and grow their own food in the harsh desert of the tundra. How did they hunt whales? In order to hunt larger prey like walruses and whales, the Inuit hunters would gather in a large group. It would sometimes take a number of men a long time to catch and kill a whale, but it was well worth it. Seasons 0. Influences Chart. Inuit Tribe The Inuit tribe is extremely interesting. 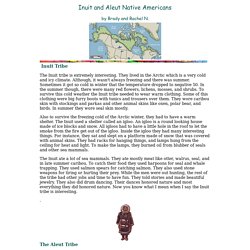 They lived in the Arctic which is a very cold and icy climate. Although, it wasn't always freezing and there was summer. Sometimes it got so cold in winter that the temperature dropped to negative 50. Indigenous Peoples Atlas of Canada. For 5,000 years, the people and culture known throughout the world as “Inuit” have occupied the vast territory stretching from the shores of the Chukotka Peninsula of Russia, east across Alaska and Canada, to the southeastern coast of Greenland. 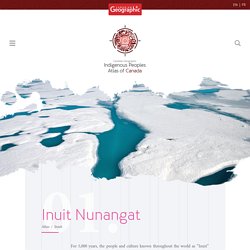 It is here, based on our ability to use the physical environment and living resources of this geographic region known as the Arctic, where our culture developed and our history unfolded. Inuit are an original people of much of the land now known as Canada, and our history represents an important and fascinating story. It is not just a story about an early chapter of Canadian history. Indeed, it is an epic tale in the history of human settlement and the endurance of culture. Each chapter of our story provides valuable lessons and insights about issues that matter to cultures everywhere. This is a story that we must begin to tell for ourselves.