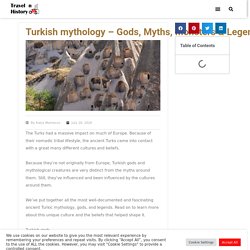 Because of their nomadic tribal lifestyle, the ancient Turks came into contact with a great many different cultures and beliefs. Because they’re not originally from Europe, Turkish gods and mythological creatures are very distinct from the myths around them. Still, they’ve influenced and been influenced by the cultures around them. We’ve put together all the most well-documented and fascinating ancient Turkic mythology, gods, and legends. 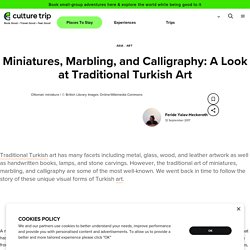 Religion & Islam in Turkey. Turkey has been home to all three great revealed religions—Judaism, Christianity and Islam—for centuries. 99% of Turkey’s people today are Muslim, and Turkey’s historyis principally that of an Islamic people, their empires,architecture, arts and literature. 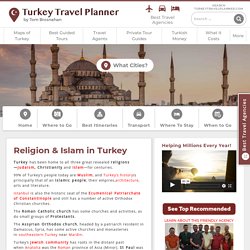 Istanbul is also the historic seat of the Ecumenical Patriarchate of Constantinople and still has a number of active Orthodox Christian churches. The Roman Catholic church has some churches and activities, as do small groups of Protestants. The Assyrian Orthodox church, headed by a patriarch resident in Damascus, Syria, has some active churches and monasteries in southeastern Turkey near Mardin.

Turkey’s Jewish community has roots in the distant past when Anatolia was the Roman province of Asia (Minor). But in general, Turkey’s history of religious tolerance is exemplary. Under the Ottoman Empire, each religious community was autonomous in domestic affairs and could apply its own religious law in its own courts. —by Tom Brosnahan. Location, Geography, People, Economy, Culture, & History.

Relief Turkey is a predominantly mountainous country, and true lowland is confined to the coastal fringes. 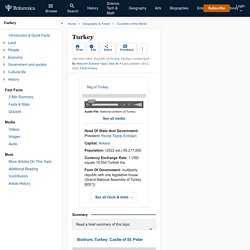 The Real Story Behind The Voodoo Zombie Mythology Of Haiti. The process of zombification begins when a bokor selects a victim and administers the zombie powder to them. 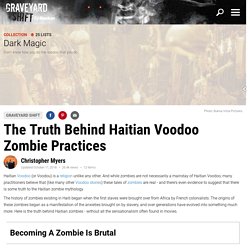 This administration can vary from ingestion to injection, or even a blow dart. Once the powder takes effect, the victim enters a state of death-like paralysis in which they are still conscious. After being pronounced dead, they then bear witness to their own burial. Haiti Population 2020 (Demographics, Maps, Graphs) Haiti - Climate. Haiti has a warm, humid tropical climate characterized by diurnal temperature variations that are greater than the annual variations; temperatures are modified by elevation.

Average temperatures range from the high 70s F (about 25 °C) in January and February to the mid-80s F (about 30 °C) in July and August. The village of Kenscoff, at some 4,700 feet (1,430 metres), has an average temperature of about 60 °F (16 °C), whereas Port-au-Prince, at sea level, has an average of 79 °F (26 °C). In winter, frost can occur at high elevations. Haiti is located on the leeward side of the island, which means that the influence of humid trade winds is not as great as in the Dominican Republic. Theculturetrip. Turkey Population 2020 (Demographics, Maps, Graphs)

What is the Climate In Turkey? - Live and Invest Overseas. Most of Turkey has a Mediterranean climate and enjoys four seasons that can be more and less harsh depending on the region. 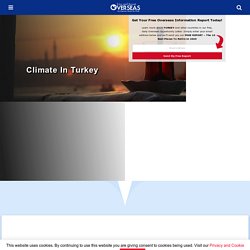 Areas of Turkey nearer to the Black Sea experience the cooler Oceanic climate. Areas of Turkey near the Sea of Marmara (this area includes Istanbul) have a transitional climate that straddles both Mediterranean and Oceanic climates. Here, the seasons can be harsher than on the Mediterranean. The Turkish coast that borders the Mediterrean Sea enjoys a mild climate—hot, dry summers and cool, wet winters. It rarely snows in these areas. Polynesian Mythology - Myth Encyclopedia - god, legend, war, world, creation,... Polynesia is a vast region of the Pacific Ocean consisting of many hundreds of widely separated, culturally and politically diverse island groups.

Ranging from Midway and Hawaii in the north to New Zealand in the south, the triangular area called Polynesia also includes Tahiti, Samoa, Tonga, Tuamotu, the Cook Islands, and the Pitcairn Islands. Although the mythology of Polynesia took different forms on various islands, many of the basic stories, themes, and deities were surprisingly similar throughout the region. Foundations of Religion and Myth. Scholars believe that humans first migrated to Polynesia from Southeast Asia about 2,000 years ago. These people carried with them their mythological traditions about events, deities, and heroes. Polynesian religion and mythology placed great emphasis on nature, particularly the ocean environment. Because mana was sacred, Polynesians invented complicated rules to protect it.